Until we traded in our car last October, I had never owned a car that had GPS. Being an old fashioned girl that can read a map, I am skeptical about this 'new-fangled' stuff, but around Taranaki, we don't have a lot of need for it.

On our trip south, even though we had maps, we got GPS with the rental car that is held onto the windshield windscreen with a suction cup and Hubby was fine to rely on the GPS to get us where we were going. I'm not sure how it determines which road to show us, but the fact that 4 out of 5 times, it asked if we were ok with unpaved roads was interesting, even though I know that dirt roads are part of living in New Zealand.

We had just left Moeraki and Hubby asked for directions to Lawrence as a point in the general direction we were headed. We turned onto a dirt road and I didn't think much about it. But it went on and on. And turned onto another dirt road. After a while we were crossing this crazy looking bridge that I thought was crossing a river but later learned it was across a lake. 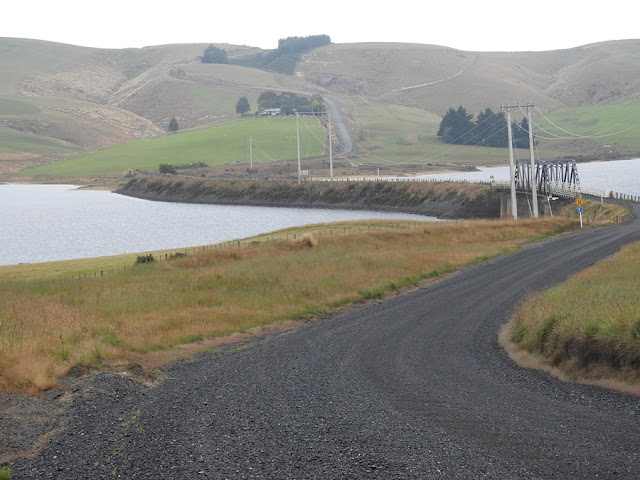 On two of the posts along the bridge, we saw copies of this reward poster. When you read the fine print, you learn that it was a replica of a local poster from 1865. 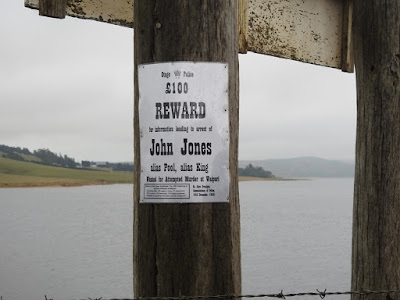 Then it was on to yet another dirt road!

Now, as we are traveling along, I'm sure this is not a well-traveled road because the livestock--mostly sheep--is spooked by our arrival next to their paddocks. One or two are startled and they cause a panic across the whole group of animals.

We also noticed other cars with the suction cup on the front window and realized that they are doing the same thing--relying on GPS. The conclusion we came to is that the district might end up paving these dirt roads if they are going to have so much traffic stirring up so much dust!

I'm pretty sure that we were given the 'shortest' route as opposed to the 'fastest' route but that's ok because we were on vacation  holiday and it really didn't matter. We saw parts of the country that we would never had seen otherwise.

Around here you can end up on a number of dead-end roads that no longer go through if you trust your GPS too much!


Looks like it was an interesting journey! My GPS almost put me right into a lake once. I always keep a back up map, just in case :)

I love GPS in car

How interesting that road over the water. Is it Moeraki (boulders) in the south of the north island you left from. Lol there is a highway and GPS send you on the gravel road?
Ah well that's the way to see something off the beaten track :)
Next time you go that way stop for a coffee in christchurch

Oh, GPS or Google Maps - they all have their "senior moments!" When abroad in Europe we were so dependent on it, but the translation of Google is not the best - we got lost in Holland (our own country)!

JoAnn ( Scene Through My Eyes) said...

If you use GPS to get to our house you would end up in some small ponds down the street - and we live in a city of almost 100,000 people - and still GPS can't get it right.

I really like it when that happens, if you hadn't gone that way you wouldn't have seem what you saw, it's taking the back roads that you see interesting sights :-)

when we travel in Australia we use both a GPS (stuck on the windscreen) and a map. The map I think gives us a better overview, whereas the GPS can pinpoint exactly where you are. Happy travels.

GPS is a wonderful asset to have most times but there was recently a story on our news about GPS taking a couple through a very dangerous place in South America, when they were on holiday, and sadly they were robbed and killed. That may have also happened using a map, but maybe if they stopped to ask directions they would have been warned away from traveling in that area?

We also use GPS. The unit is looking for short-cuts, which are usually narrow and in poor condition. That's why we also included a map.

We used the GPS in our country of origin and one time we got lost 3 times, because of the explanation given (because it's translated in English)! On the other hand, google's maps are not always right either. There was that particular time we had no idea where we had landed, so we asked a store owner. He pulls out a little piece of paper with directions! Tells us, "It happens all the time!"
When you have traveled a lot and don't trust it, I guess it's best to trust your instincts, haha.
Am inviting you to SEASONS, where anything goes. My thumbnail photo link is open Mon-Wed till 7pm, US Pacific time. Hope to see you there -if not this week, then next:)

The GPS can take you to all sorts of different places, I enjoyed reading about your trip.
Thanks for visiting my blog.