It has stood tall since the late 1800s and now one of Hawera's landmarks is going into well-earned retirement.
The Penfold hexagonal letterbox was installed on the corner of High and Victoria streets in 1898 and has served the town for 112 years. As alternative postboxes have long since been installed, NZ Post is retiring "the Penfold," which will accept its last letters on June 30.
But rather than be removed, the letterbox has been given to the South Taranaki District Council and will remain on the street as a historical landmark.
The council's property and facilities manager, John Sargeant, said it would sand-blast and clear away the rust, before repainting the box in its original "royal red" colour.
An information plaque will also be placed on the side.
"One-hundred-and-twelve years and it's never failed," Mr Sargeant said.
NZ Post Hawera mail officer Mia Aarts, who has worked as a postie for 36 years, said it was "awesome" the box would now be a landmark. "I was collecting from it for eight or nine of those years, twice every day."
The Penfold was designed in 1879 by Cochrane Grove and Company in Britain from an original design by JW Penfold, and was cast in Dunedin by F&D Duncan Ltd.
http://www.stuff.co.nz/taranaki-daily-news/news/5056174/Its-the-last-post-for-this-Penfold

Otterboy wanted an L&P on our road trip the other day, but all we could find was L&P Dry. I was proud that he decided to 'try it one time' (something he has learned lately). He was reading the label out loud to us as we rode and I thought it was funny enough to share. 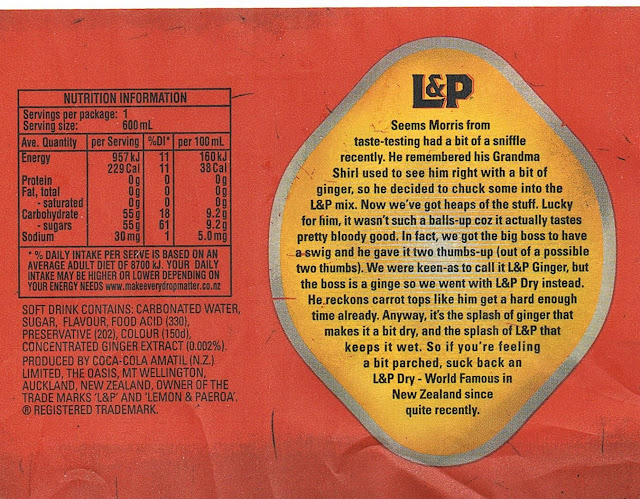 L&P stands for Lemon and Paeroa. Click here for the history of the drink.
2 comments:

So you think you have nothing to watch in the evening?  Be glad you don't live here! These are the American shows I can get at the moment. Keep in mind they are not always shown in order nor are they totally up-to-date and they can disappear any time.

We get Dr. Phil and Oprah followed by Queer Eye for the Straight Guy.
The Simpsons are on several channels, but most of them are reruns.

Even with cable tv, it's good to have broadband.

The times, they are achanging???

I don't get how people act crazy when a FREE service goes offline for a bit. If I paid for Blogger, I think I would have a right to complain, but I think they did an excellent job of explaining what happened and I don't plan to jump ship any time soon.

When it comes to mannerisms, I believe there are only two kinds of men in the world--one with mannerisms like the men you grew up with and the opposites. That's why  you have such a good chance of picking a man 'just like dad'.

Sometimes, I don't really want to know why my facecloth is not where I left it. It's time to be washed, anyway.

When I moved here, I kinda kept an eye out for the ex-wife. Every time I saw someone with her short haircut, I wondered if it was her. Then I noticed that there are a lot of similarities between her and other females with here haircut--body shape, freckles, shape of the nose. I'm not saying that there is a small gene pool in NZ, but you can draw your own conclusions.

Is it being hypocritical when you do something that you get mad at someone else for doing?

There are some very trainable men in the world. But, no matter how trainable they are, they will never understand the female importance of 'everything in it's place' or 'if you put it back in the same place every time, you will know where it is when you need it'.

Given that information, I have found that it take much less effort to just pick up the clothes left three inches away from the clothes basket than to fuss and fume and think things like, 'He knows what I want--he's just too lazy or selfish to do it!'  If that's the worst thing he does on a regular basis, then I can live with 2 seconds of inconvenience. After all, he did get pretty close.

And speaking of 'trainable'--I haven't had to call 'Noise Control' because my neighbors are sharing their music all the way into my living room lounge in quite a while. Hmmmm...

Choosing to be upset over a fleeting moment is a waste of time and energy. Choosing to forgive and forget is much more comforting and much less ulcer-producing.

After watching our cat, Grace,  wander around the house, I have to wonder how cats got the reputation for being graceful and agile.

Fall might be in the air, but I refuse to acknowledge it as long as the sun is shining!
6 comments: 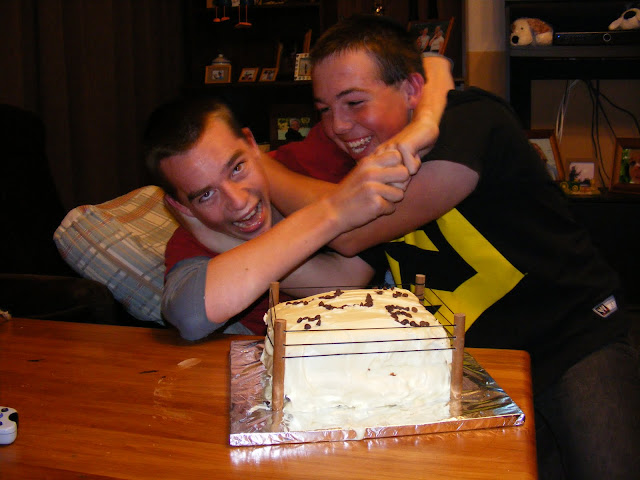 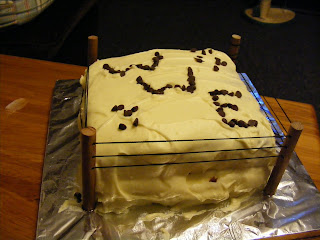 Otterboy turned 15 this weekend. Since he and his bestie, Maniac, are sooo into wrestling, Hubby built a wrestling ring to put around the cake--he's so clever! Supplied
Margaret Hoffman
Since swinging 60s it's provided refuge for vagrants, beggars and an assorted cast of stiletto- wearing sex workers.
For Aucklanders, young and old, Karangahape Rd has long been the spiritual heart of the city: edgy, bohemian, at times slightly bleak and raggedy, but, all in all, pretty obliging.
Not too dissimilar, some would say, to Margaret Hoffman, the 62-year-old unofficial patron saint of K Rd, who died just as she lived - down and out and alone.
It's fair to say Margaret wasn't particularly charismatic or pleasant, but over the years, through sheer presence, she became a part of K Rd's rich tapestry and, for that reason alone, her loss last week is being felt across the city.
To the hundreds of thousands who crossed her path over the years, she was known simply as "Margaret of K Rd" - that snarling, cacophonous, chain-smoking and occasionally offensive kerbside fixture outside St Kevin's Arcade.
"I noticed you for the first time a year ago . . . there you were, fag in mouth and full of attitude. A real character. You added colour to the world. Once seen, never forgotten," wrote Helen Saunders on a Facebook tribute established in Margaret's memory. Already 8000 members and climbing.
...
But for some reason her death has stirred guilt, sympathy, compassion, or possibly a hint of all three from Aucklanders, who had a strange affinity with this toothless, extraordinarily private pauper.
So much so that, in the wake of her passing, calls quickly came for a monument to be erected in her honour.