Let them in or they will go bad...

According to this article,
http://www.stuff.co.nz/national/education/3760187/Uni-rules-may-force-pupils-on-to-dole , apparently kids will become welfare bums if they don't get into University. That should be reason enough not to raise the bar on entrance exams. (Where is that sarcasm font when you need it?)

It's unbelievable to me that anyone would actually make such a statement, but that's the latest comment on raising the bar on University entrance exams. But, then it's a typical Kiwi attitude.

In case you didn't know, I am not exactly in love with the NZ school system. (Just click 'school system' in my label cloud on the left and you can find out for sure.) I can appreciate that today's society needs kids that know it's ok to say 'no' to different situations. And I laud the system for teaching children how to deal with their emotions and those of others.

But, the 'touchy feely' attitude has gotten NZ a culture of kids who decide that anybody who doesn't agree with them is 'bullying' them. It's an opinion, get over it.

And, it's also gotten kids who rationalize that if it 'makes me uncomfortable' I don't have to do it. Sure, that works when your mates want to you to drive the get-away car for a robbery or if you are being pressured into having sex before you are ready.  But just because you're too lazy to learn to spell or multiply doesn't mean you can rationalize it and choose not to bother!

What I see are complacent little space-holders who have no desire to do anything that is not absolutely required.

Isn't that the reason that they go to school?  After all, if they didn't need to have someone evaluate their performance, then why aren't they out working and supporting themselves instead of leeching off adults? Food is expensive, you know.

Oh, yes....it's because they are children. They do not have the capacity to make such decisions and that's why they have parents. And teachers. So, why is the NZ school system letting these children call the shots? Is society afraid of hurting their widdle feelings?

Why aren't the teachers circling misspelled words with BIG, RED circles, like the olden days when I was a student, and expecting them to spell it right next time instead of just adding a small note at the bottom that says, 'you need to work on your spelling' with a smiley face? Where is the 'F' (or should I say 'I'--we don't want to warp their personality)  because the student didn't bother to follow the rules or do half of the work?


I am all for raising the bar for university entrance exams. That means that the high schools will need to do a better job. And the primary schools will have to do better.


If the kids have truly 'worked hard' (as in the article) and still can't get in, then DUH! they obviously haven't worked hard enough and someone needs to redirect their work.


This article makes me wonder what a University Degree is worth in NZ if the requirements are so low to begin with? 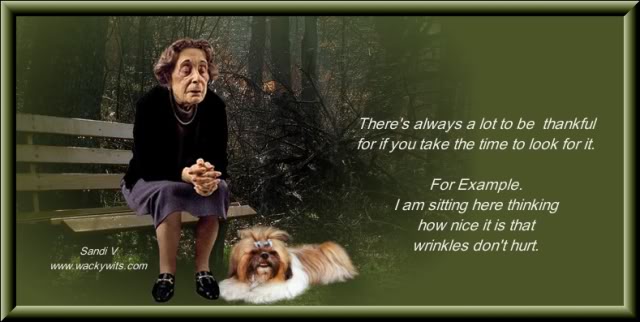 You must cross the line from
wariness
to
acceptance
to truly be a friend.
--anon
No comments:

Phred has settled into our lives very nicely. Of course, it is he that owns us, as cats do. He is very content to pretend to be the great ginger hunter while he waits for me to hang clothes.

He seems to have a ginger and white nemesis that lives across the fence. I'm not sure what they think they are doing, but I will hear a blood-curdling howl occasionally when the 'other' cat ventures too close to the patio. Phred actually tried to attack him through the glass door once, but that didn't work out very well, as you can imagine! 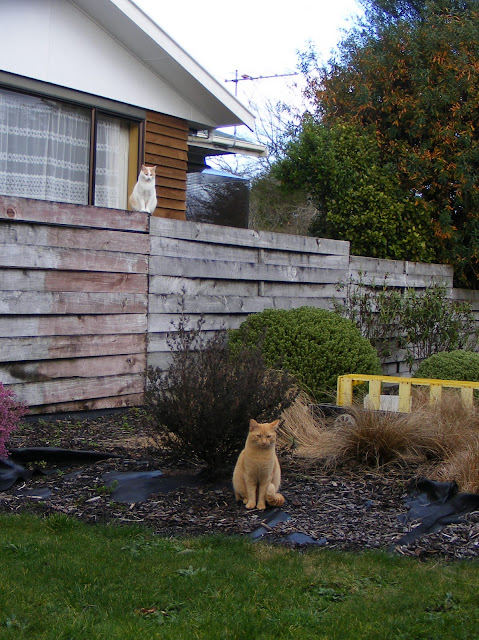 It's a strange relationship they have.  When we first moved into this house, we though 'the ginger' (as we call him) used to live at our house because he would sit outside the front and back doors and just peer into the windows. Twice, he actually came into the house like he owned it! 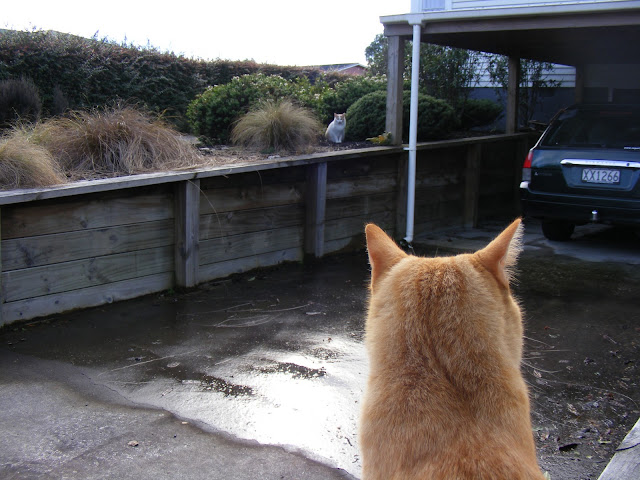 At the end of the day, we all know who's boss. 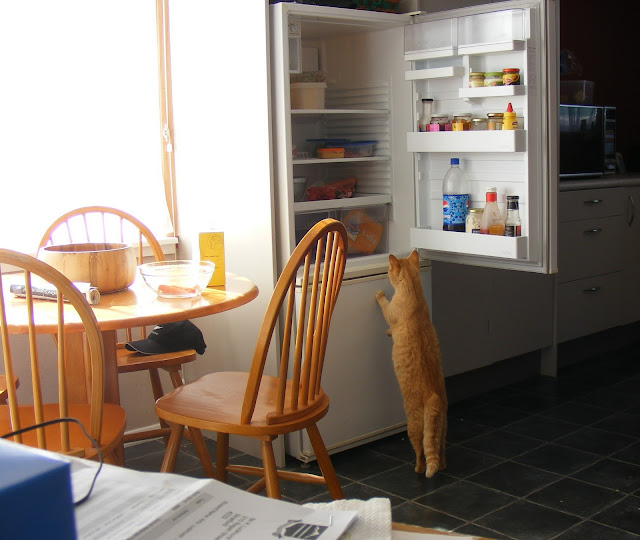 To celebrate my 200th post on my photoblog, My world through my Camera Lens, I am having a giveaway for a paua pendant and earrings set! Click here to check it out!
No comments:

Cultural differences and other thoughts

Old singers and old tv series come to NZ to die. The latest is Miami Vice. The series started from the beginning here a few weeks ago.

Some brand names are universal, but the product is not. I cannot tear duct tape with my fingers. Cotton Soft and Kleenex toilet tissues are NOT equal to US quality.

Lotto is currently using the theme from 'The Greatest American Hero' for their ads. That was a blast from the past when I first heard it.


Phred, the current cat, is so different from Bubba, the former cat. Bubba only meowed and rubbed my legs when he wanted fed. Phred does it when he wants to be petted--which is pretty much anytime he's not sleeping.

I don't understand why people in the news get name suppression here. I can see it if you're a minor, but after you've been convicted of a crime you're officially a criminal and don't deserve it.

I hate it when television stations don't show the second of two parts of a program. I don't believe they could get away with that in America.

The ASB Bank has been using Americans for their ads for 10 years now.

Never install a dark floor in the kitchen. It looks great, but shows every tiny speck of dirt.

In a week, I can watch every series of the CSI shows--plus Survivor, Criminal Minds, Ugly Betty, Bones, Mythbusters (and others, I'm sure) on two different channels but with different seasons or starting points.

Hubby takes me on a trip 'around the mountain (Mt Taranaki)' occasionally and we always find great stuff to photograph, even after 4 years.
3 comments:

It's the school holidays for two weeks and, for the week they are at our house, the kids were forced commanded made  it was suggested that they cook one meal and bake something for the family. They are both wonderful cooks/bakers and love to do it. Missy made chicken and home-made chip for her meal and a great chocolate cookie fudge. Otterboy cooked pork chops and made us some 'chicken breadsticks' for a snack.  The snack was so quick and easy that I asked him to write it out for me to share it with you. Here's what he wrote


Ingredients:Preheat oven to 180C (bake). Soften butter (do not melt). Add chicken stock, mix together, spread on bread and cut into 6 strips. Bake until golden brown. Recipe can be increased.

They were a great snack for watching tv!
1 comment:


He then asked, "Who still wants it?"  Still the hands were up in the air.

"Well," he replied, "What if I do this?..." and he dropped it on the ground and started to grind it into the floor  with his shoe.


He picked it up, now crumpled and dirty. "Now, who still wants it?"  Still the hands went into the air.

"My friends," he stated.  "We have all learned a very valuable lesson. No matter what I did to the money, you still wanted it because it did not decrease in value. It was still worth $20."

He continued, "Many times in our lives, we are dropped, crumpled, and ground into the dirt by the decisions we make and the circumstances that come our way. We feel as though we are worthless.


But no matter what has happened or what will happen, you will never lose your value.

Dirty or clean, crumpled or finely creased, you are still priceless to those who care about you.


The worth of our lives comes not in what we do or who we know, but by who we are. You may not see what others see in you but you are unique and valuable ."