Can I have a drumroll, please?!

It's time to announce the winner of the giveaway I mentioned a couple of weeks back! I wish I could send a gift to each of you, as I am truly in awe of your faithfulness, but there can only be one winner.

I considered using one of those on-line randomizer thingies to pick the winner after I had assigned a number to each commenter, but my problem with that sort of thing is that, of the few that I have seen, the first or second person was never picked. So, I did it the old-fashioned way and wrote each name on a piece of paper and coerced asked Hubby to pick one.
And now, without further ado......


the winner is.... Wandering Wren!
Congratulations!!


Please email me your address at tenfootheart (at) gmail (dot) com and I will get your gift to you as soon as I can.

Thanks again to all of you lovely bloggers who stop by.

BTW, I have to mention that she was, amazingly enough,  the very first commenter, :)

I have enjoyed seeing all manner of birds in the garden: to name a few, pukekos, plovers, starlings, magpies, swallows, the occasional kingfisher or two and the latest being a wild pheasant.

I have, however, noticed the distinct absence of butterflies. In Hawera, just 20 minutes away, we have seen trees covered with them in the park and bushes covered with them at a public walkway. But there has been only the occasional single monarch fluttering past the house.

When I mentioned this to Hubby in early spring, he suggested we plant a 'butterfly garden' with lots of hebes, as the walkway signs suggested. I doubted his wisdom, but he sarcastically quipped, 'If you plant them, they will come' and commenced digging.

We considered planting swan plants, but the ones we planted in Stratford were chewed to their death in a matter of weeks by the lovely little caterpillars. So we concluded that we would need to cover them the first  year in order for them to be hearty enough for caterpillars and decided against them.

All spring and summer the hebes bloomed but there was no increase in  butterfly activity even though the bees loved them :)

Then, in mid-summer, Missy showed up with two swan plants for my garden and I decided to plant them and wait to see what happens. I waited. And waited. It grew some lovely green leaves and flowered beautifully. And one day, I noticed that one single monarch started to drift by almost daily. Some landed on the swan plants and some didn't.  Then, even though it was already getting into the autumn months, much to my surprise, I noticed one fat caterpillar!

As of today, there were 10 caterpillars of various sizes and the swan plants don't seem to be any worse for wear! 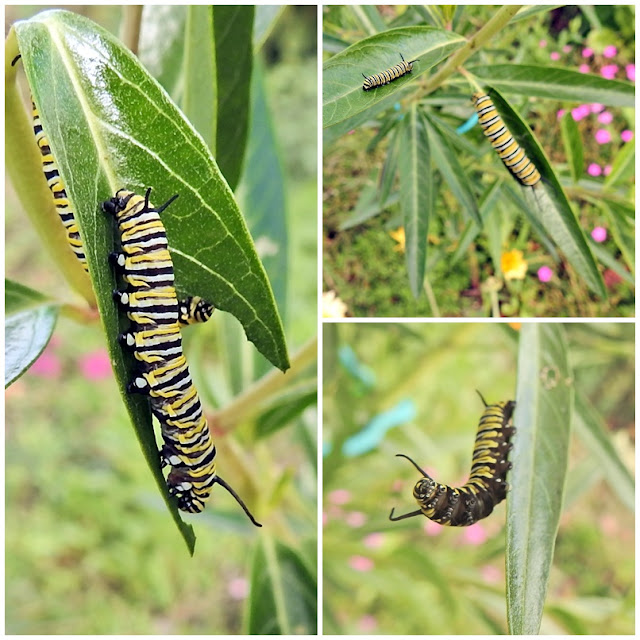 I am delighted beyond belief with the success of  attracting the beautiful butterflies! Of course, I plan to get more swan plants next summer and see if we can change the courses of monarchs in Taranaki!
13 comments: