Each year, the Christmas season begins with the Christmas Parade on the first Saturday of December.  OtterBoy was riding one of the floats this year, so we went early to get a good view of the parade as it proceeded one whole block down the center of town, around the round-about and back again. Gotta love small town traditions! 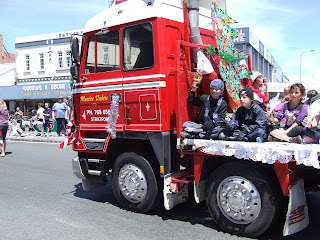 Just before traffic was blocked off, we saw a trickle of motorcycles passing through town that I discovered was the annual Teddy Bear Run that was actually hundreds of riders. This is a yearly ride for the bikers and the entrance fee to ride is one stuffed toy which is donated to the local women's shelter. 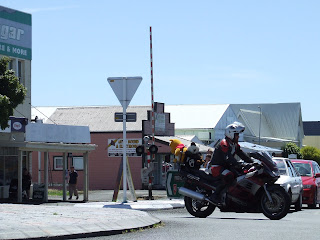 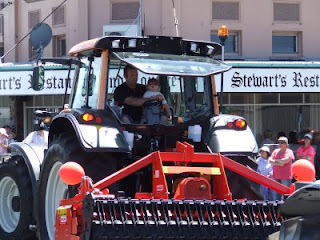 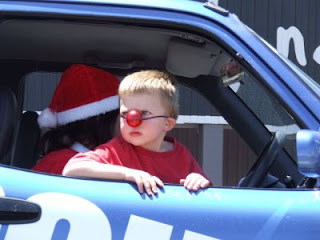 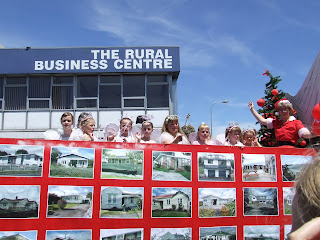 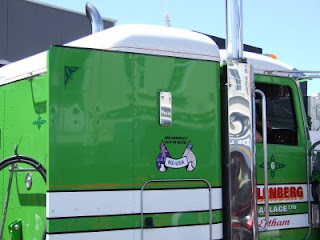 Since we wouldn't be seeing the kids on Christmas Day, we decided to have our Christmas celebrations early this year, on Monday the 22nd.  All day on Sunday, OtterBoy kept 'informing' us how many hours and minutes it was until 8AM when he was allowed to get out of bed for our official Christmas celebration. We went to New Plymouth on Sunday night for the annual 'Christmas in the Park' gathering--which marked the opening of the Pukekura Park Festival of Lights  --and finally decided to open the 'big stuff' when we got home.

Missy got an MP3 player and we haven't seen her since--except for meals! OtterBoy got the beginning of his N-scale train that will be built over time on a pretty large scale.
Next morning we had the annual treasure hunt for the kiddos.   This year we hid 17 little gifts for each of them (each with their own wrapping paper)  around the house before we went to bed and they enjoyed themselves immensely searching cupboards and shelves and strange places to find them all.
After the pressies, we went to Kai Iwi for a picnic of Peachy's Fried Chicken with potato salad and other trimmings.  I even put on my suit and got some sun this year while the others took a dip in the river where it runs into the ocean. After some strolling on the beach for shell and rock collecting, we took our time driving home and all collapsed in a nap-needy heap.  It was another good Christmas at the Luckhursts and we have a lot to be thankful for.

Remember the old, old, old western saloons where they served the young cowpokes "sasparilla"? [I bet that thought takes you back!] Well, I wanted to make the kids rootbeer floats, but there is no such thing as rootbeer in this strange little country that I live in. So we went to the supermarket chain that carries more imported items than the others and that's  where I found 'sarsaparilla'. I had always heard it was the same as rootbeer [even if it was spelled weird] and it worked quite nicely. The kids were impressed with yet another American delicacy.


Paper dinner napkins are just not a part of the culture here. Some takeaway places have a stack of them on the counter that you can help yourself to but most don't even bother to offer them. I know that the first time I put them on the table, the kids asked 'what's this?' Now, it's a game at each meal to see who will be the last to put your napkin--sorry, it's called a serviette here-- on your lap!


Hubby's driving used to make me hold on for dear life--crossing the middle lines, especially around tight curves in the road--until I realized that there is rarely any traffic in the outlying areas. 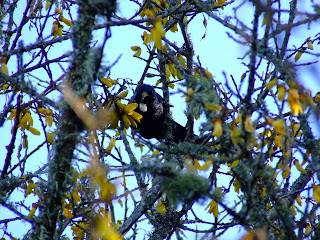 Tuis have the most melodious metallic sound when they sing.
I love to listen to them and I am so glad they hang out close to the house. 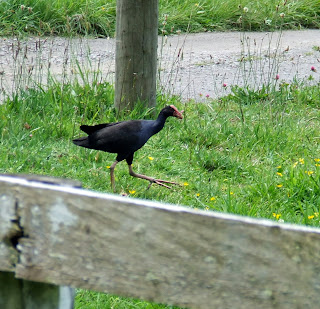 Pukekos, on the other hand, sound like a strangling cat.

You can go anywhere, including restaurants, barefoot in NZ. Many children don't bother wearing shoes to school.


Morning glories are considered a noxious weed here because they spread so quickly.


Long before I got to the age that I am, I quit thinking about running. I would tell people that I only run if the house is on fire and we would snicker. That was before I became supreme evil stepmom to pre-teens. I really didn't think my legs were capable of running--what with the muscle tone loss from my thyroid problem and being a bit on the 'fluffy' side--but, I do actually run! I don't run a lot, and it's not for long distances, but I actually run after soccer balls and cricket balls and chasing ducks away from the pond. I guess it's true that you should 'never say never'.


I had very little occasion to look at new stoves in Kansas, but I did notice that they were selling 'convection ovens' that had a fan in them. That seemed pretty uptown to me, since it didn't understand why one would want a fan in your oven. In this strange country, it seems those 'cookers' are the norm. It's not as bizarre as I had imagined since the only real difference is that you can cook at about 10 degrees C less if you use the fan. 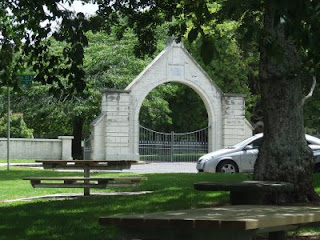 Most of the towns that we have visited have huge memorials to the veterans of all the wars that Kiwis fought in. That's pretty cool. Many towns also have a park named 'King Edward's Park.'

I put a poll on a forum I visit about whether or not others thought their fellowmen were polite or rude. From the votes and comments, I have come to the conclusion that Americans are by far friendlier than most Europeans. Thus, it seems that it is my duty to civilize the country of New Zealand--or at least raise the stepkids to be friendlier and more mannerly than the norm seems to be here.

Apparently, the whole 'outgoing' and giving American persona is a totally foreign concept, because the little old ladies who run the 'op shops' [charity shops] are genuinely surprised when we buy a little something and tell them to keep the change. I'm talking shock and stammering. Real shock. How sad that is.

And for those keeping track of the ducklings, we have had 65 babies in 10 broods this year. But it looks like the parade is coming to an end.  And, when it does, it will be for good because we are going to net the pond.  The first spring was cute with one brood, the second spring was also cute with two broods, but this is just a bit overwhelming!!

We will be concentrating on the poor fishies that have put up with the ducks.  There are some that are as long as hubby's size 13 feet! More on them later.

OK, it's not a rose, but it's still pretty cool, isn't it?!
After being housebound with a bug and two days of rain, I took the first opportunity I had to go outside and take some pics! 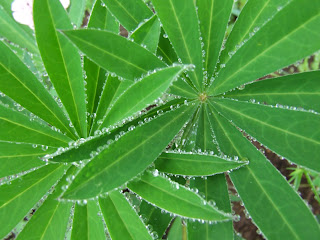 This lupin shows how fine the raindrops are. 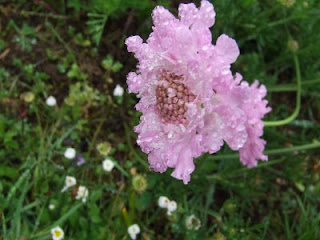 Here is the bloom of a groundcover I picked out last year. Unfortunately, I have no inkling of it's name. 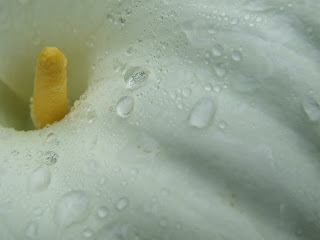 This is the huge white calla lily along the pond's drainage ditch that gets bigger every year!

At the beginning of October, we went out to enjoy the Rhododendron Fringe Festival and the four of us took oodles of pictures. It was interesting to see how alike a lot of our pictures were, but also how diverse some of the subjects were. We all chose the pictures we wanted to enter the photo contest and they were all printed up and sent in--a total of about 20. It seems that 14-year-old Missy has the keen eye of the family, because, out of over 200 entries, she was the winner of the overall best picture, besides the same photo being the winner in the children's division, too! 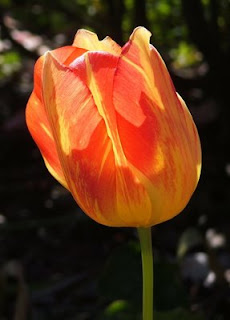 This is her winning photo, much to the chagrin of a nameless cross-town rival! 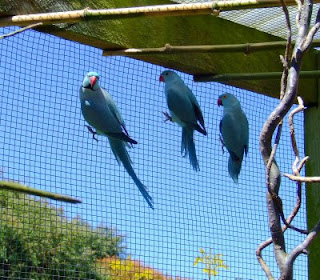 And this is my 2nd place winner in the animal division.

We are very proud of our endeavors with photography, since none of us have any prior experience to speak of. 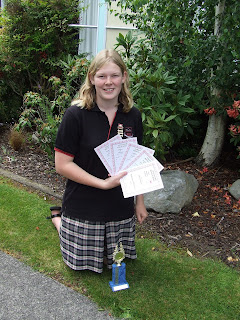 We are also proud of Missy on her educational accomplishments. She was the top prize-winner [we called them awards] in her class for her excellent grades and will have her picture in the paper for that, as well. Of course, it was her first year in high school and the students won't be streamed into groups until next year, so it was just general courses for her that she found rather easy. Next year might be a different story to tell, but I think she will hold her own when the going gets tougher. In addition to being a good photographer, she is also a budding author!