The house seemed a bit empty and the rabbits were digging up the gardens, so Hubby and I decided it was time to get another cat. On October 25, we went to the cat adoption center in Hawera and got some good news/bad news. There were no adult cats available! We were happy that there were none to find homes for but that meant we had to go to New Plymouth to see what they had available.  There we found about 10 that weren't kittens to choose from.

After quite a while, we decided to bring home two cats.

This is Garfield. I would imagine he'd love lasagna but he settles for whatever is in the bowl. He is an older chubby cat, they said at least 5 years old, and he was found on the street. He has a wonky back foot that softly thumps when he walks so you always hear him coming. But he always has a lick for whoever is petting him and he doesn't mind at all being picked up (or the tiara and scepter!). 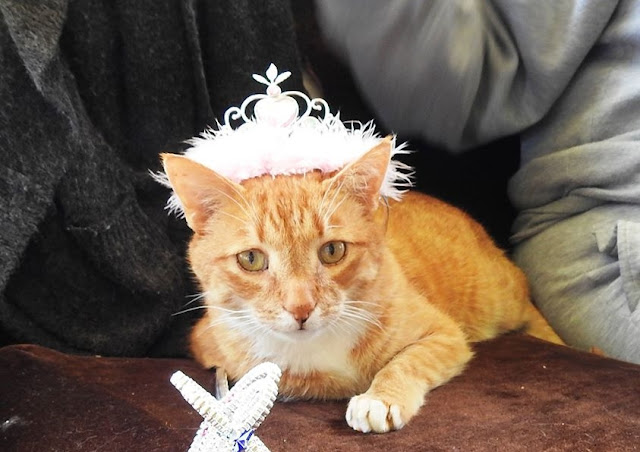 This is Sox. She's a long-haired 'teenage' cat (about 10 months old), and, to the surprise of the volunteers, came across the cat run to meet us when we got there. She is very affectionate, too, and, after a couple days of being afraid to go outside, is quite happy to wander when she wants and is rather quiet most of the time. I'm sure you can tell from the photo below that she is having such a hard time adjusting! 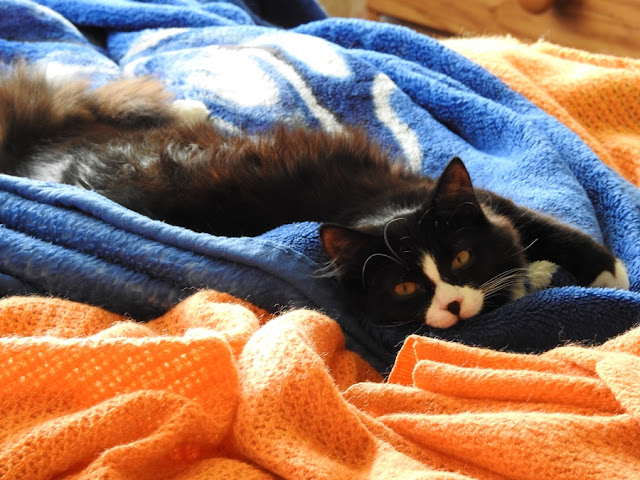 Hubby emptied the litter box around his veggie garden and hasn't had any plants eaten or holes dug since, which was a nice surprise. Good results all around.

We aren't really big on 'keeping up with the Joneses' but sometimes you just have to upgrade. Last week we bought a new-to-us car.

It's a 2008 Nissan Xtrail, imported from Japan. The electronic console (and, of course, the GPS with a female voice) were all in Japanese, as is the owner's manual. Strangely enough, there were a few English words on the console and I recognized the letters 'AV' but the rest was just a guessing game to figure out how the radio worked. We finally made it a game of  'I dare you to press the button', but the GPS would come on at random times along with a map that we think was the last directions to the port before it was exported.

Yesterday, Hubby had the console replaced with one we can read and understand. As he took the old one out to the shed, he said, 'Let's see if she can figure out where she's at now!'

My only requirement for the new car was that it sat up high so I didn't have to hurt my knees getting out. The Xtrail works very well, as it sits a lot higher than the last car.

It sits up so much higher that, when we took a ride along well-known roads, we made each other giggly by saying, 'Look! I didn't know that was over there!' or 'Hay! I couldn't see that before!'

Such a fun change. I think we'll be happy with her.