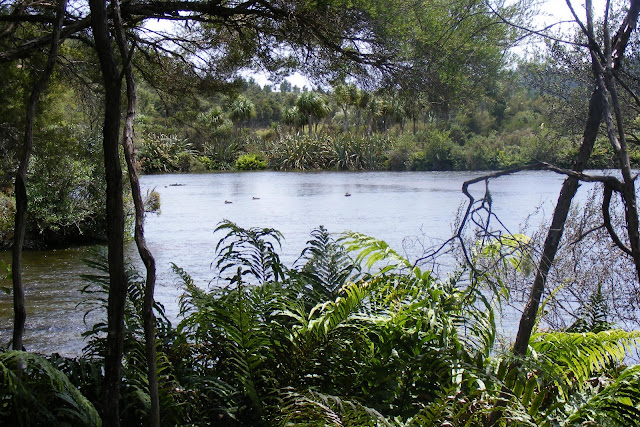 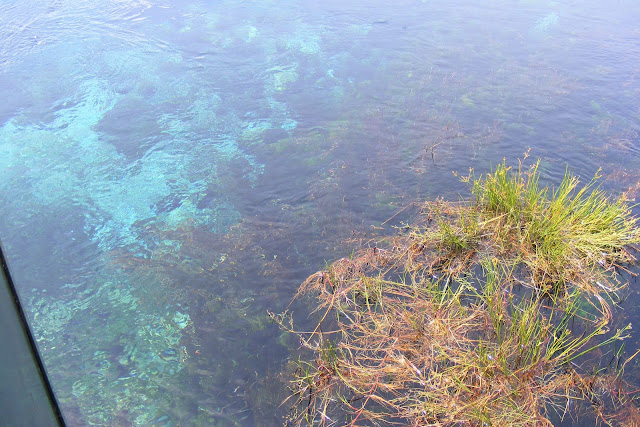 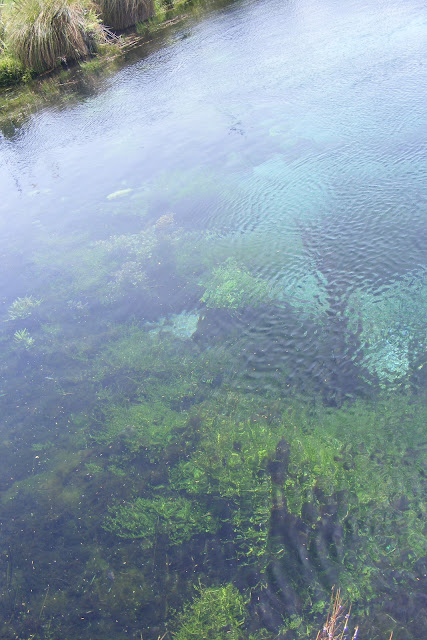 Waikoropupu Springs is the clearest water I have ever seen. It's of significance to the Maori people with the following legend:


Waikoropupu is the legendary home of the female taniwha, Huriawa, one of the three main taniwha of Aotearoa. She is a diver of land and sea, travelling deep beneath the earth to clear blocked waterways. She is brave and wise and believed to still rest in the waters of Waikoropupu, when she is not away attending to business.

Touch the Sea in Mapua  was a lot of fun for everybody. You can touch many of the creatures of the sea, including a huge manta ray, huge eels, baby sharks, many fish, starfish, anemones. 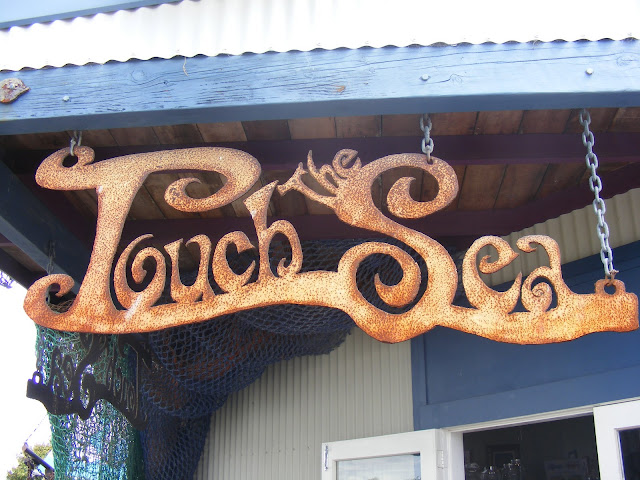 These baby rays were more interested in peeking at us than being touched, but they did venture up occasionally. 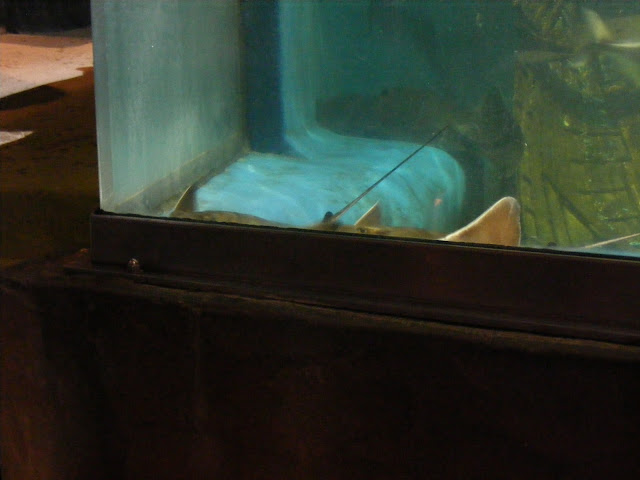 There were also displays that you couldn't touch, like this octopus... 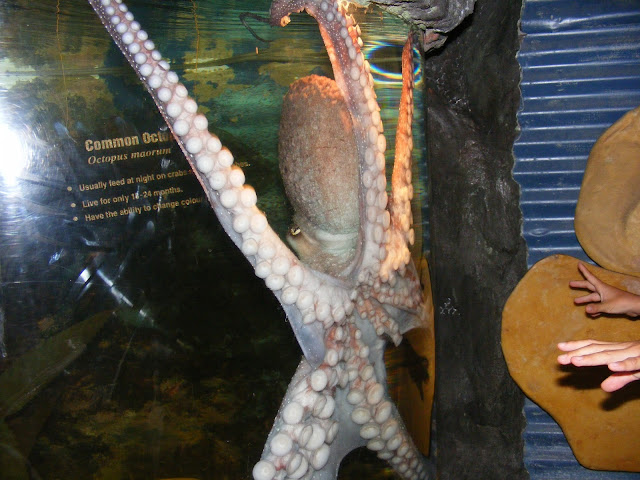 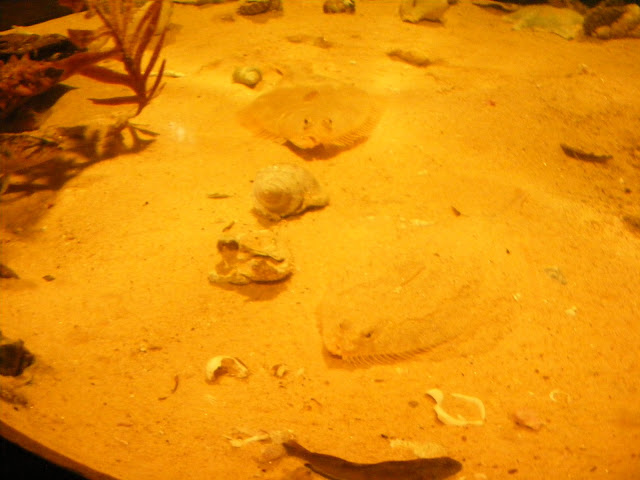 The restroom was appropriately decorated, too! 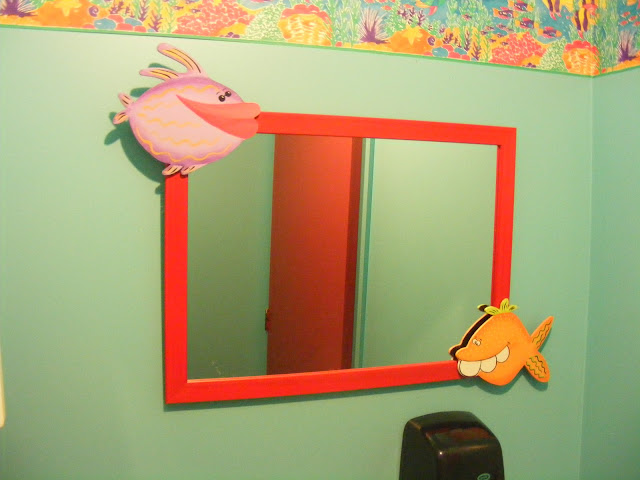 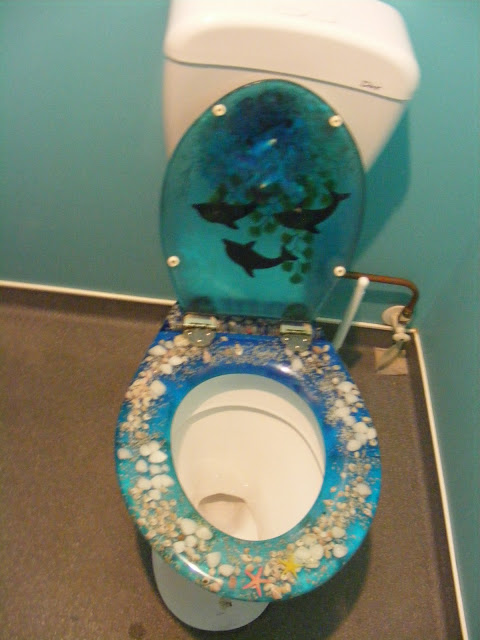 This is a great place to take the family if you are in the area.
5 comments:

We had a really great holiday, as we always do. Hubby is the best planner in New Zealand and we were all amazed at the great things and places he found.


Hubby's Mum (HM) came in from England and we picked her up at the airport in New Plymouth on Tuesday evening. On Wednesday morning, we were heading out to Wellington with a slight detour to Palmerston North so HM could catch up with some friends. While they were having lunch, we took the kids go-carting. 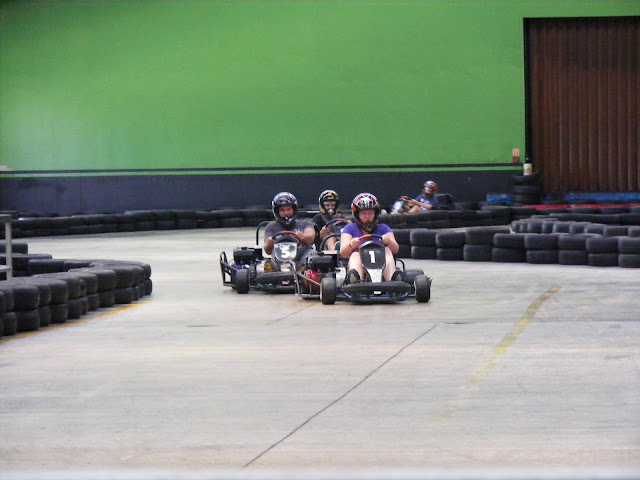 Then we were off to Wellington for a quick meal, a stroll along the beach. 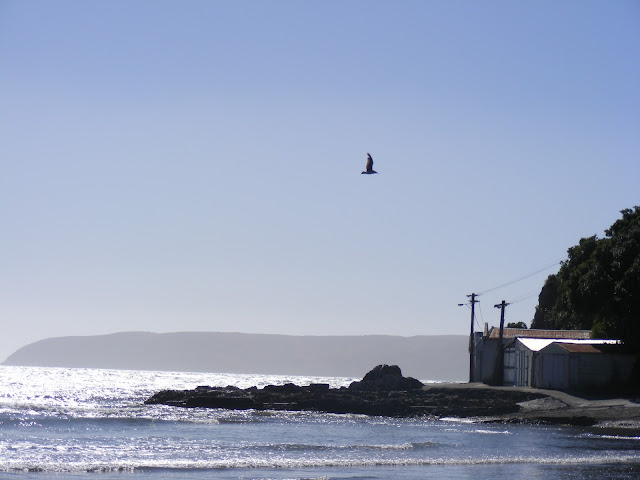 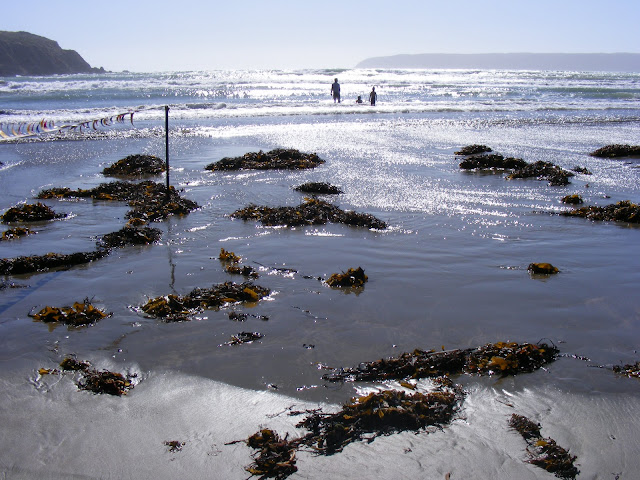 Hubby found a great motel that had two bedrooms upstairs. We were all glad for the rest, but we had started this joke from a comedian we saw on tv. Apparently, it was a tradition in her family to do a silly take-off of OilCan Harry (if you don't remember it, you can google him). It went something like this:


Well, our crew wasn't about to waste this silliness and we did the sketch at every opportunity, all giggling ourselves silly each time.


Finally, it was bedtime and when we wanted the kids to settle down, we chided up the stairs, "Go to sleep."


We should have known better because the next thing we heard was a squeaky, "But, I can't go to sleep." And we all giggled from being tired all over again for another 20 minutes. A great start to the holiday!


The next morning we were off to the ferry for a trip across the Cook Strait. 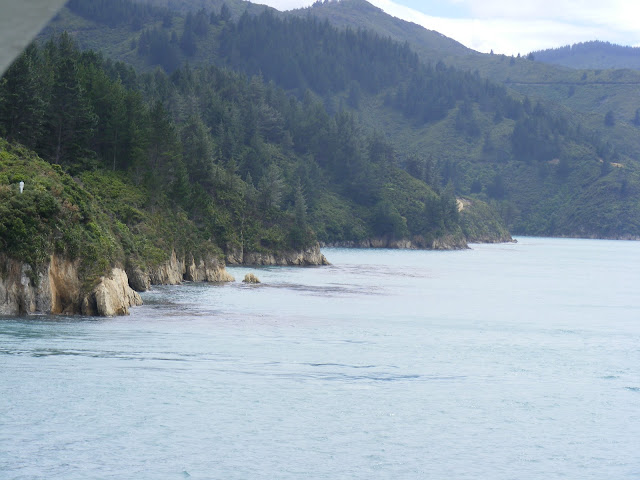 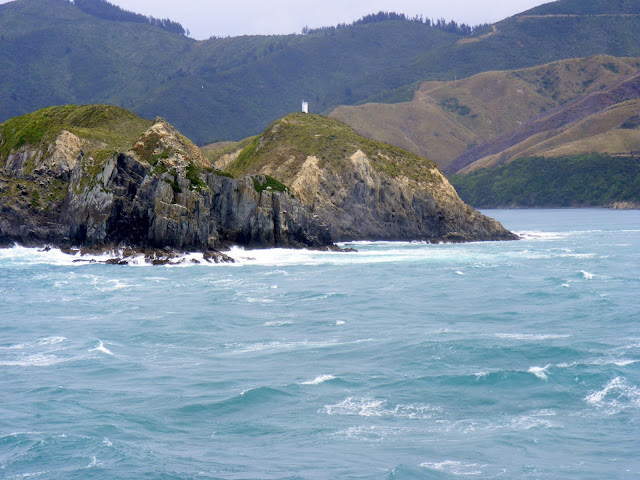 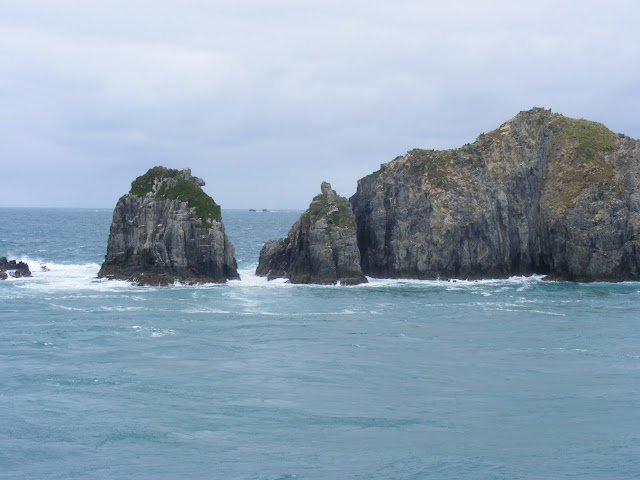 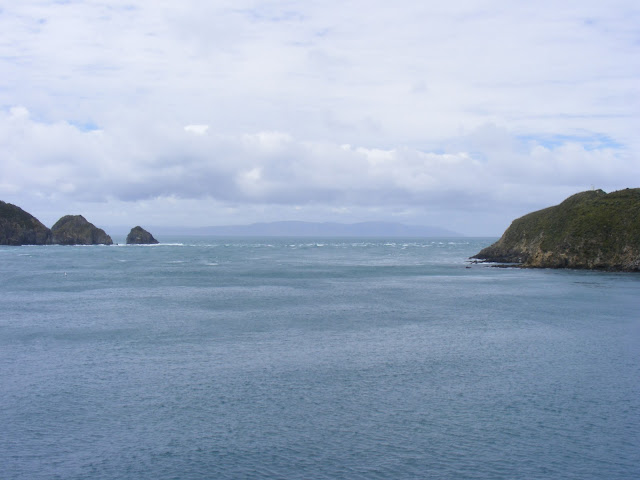 And our holiday was on it's way to other wonderful things to see and do in the South Island.


Sadly, cameras (no matter how good they are suppose to be) don't come close to capturing the real beauty of our trip, but we will cheerfully settle for the reminders our cameras provide. We have about 850 shots from this trip and it's hard to decide what to share with you. I will be taking you on a virtual tour on this blog and posting favorite shots on my other blog. So feel free to check out both blogs.
8 comments:

I'm back from holiday!

We had a great time and, of course, I took a jillion pictures!

Here's a little video that was you might enjoy while I get my photos and thoughts in order...not to mention catching up on some sleep!

I was looking on YouTube for the New Zealand version of the Aqua Lazer (steam mop) ad. Apparently, the company thinks the ad they show us in New Zealand is too demeaning and condescending to even have it out there for the world to see.

First they show a woman, on her hands and knees, with at least a dozen cleaning products in  2-square yards 2 square meters of kitchen floor space. And that's where I start rolling my eyes....

They imply that this flimsy cleaner pulls dirt out of the floor, but the only motor they mention is the one that heats up the water.

Then they use some sort of light to make us think that the blue reflection from the floor is germs. And the Aqua Lazer cleans them all up!!

How ignorant do they think anyone who has ever cleaned a floor is??

I found several ads for this thing on the internet, but not ours! If anyone runs across it, please let me know.
8 comments:

Life lesson--things are not always as they seem

In ancient times, a King had a boulder placed on a roadway.  Then he hid himself and watched to see if anyone would remove the huge rock.
Some of the king's' wealthiest merchants and courtiers came by and simply walked around it.  Many loudly blamed the King for not keeping the roads clear, but none did anything about getting the stone out of the way.
Then a peasant came along carrying a load of vegetables.  Upon approaching the boulder, the peasant laid down his burden and tried to move the stone to the side of the road.  After much pushing and straining, he finally succeeded.
When the peasant picked up his load of vegetables, he noticed a purse lying in the road where the boulder had been. The purse contained many gold coins and a note from the King indicating that the gold was for the person who removed the boulder from the roadway.
The peasant learned what many of us never quite understand. Every obstacle presents an opportunity to improve our condition. You never know how it will affect your life until you conquer it.
4 comments:

During my second month of college, our professor gave us a pop quiz.
I was a conscientious student and had breezed through the questions until I read the last one:
"What is the first name of the woman who cleans the school?"
Surely this was some kind of joke. I had seen the cleaning woman several times. She was tall, dark-haired and in her 50's, but how would I know her name? I handed in my paper, leaving the last question blank.
Just before class ended, one student asked if the last question would count toward our quiz grade.
"Absolutely, " said the professor. "In your careers, you will meet many people.  All are significant. They deserve your attention and care, even if all you do is smile and say "hello".
I've never forgotten that lesson.. I also learned her name was Dorothy.
From an email that's made the rounds several times.
5 comments:

I don't believe in 'coincidences' and I thought it would be a nice celebration for my 300th post and a great way to start the new year--by giving to someone else for no particular reason--so I am stealing borrowing her post and hope that you are inspired to 'pay it forward' this year even if you're don't get one of my gifts. 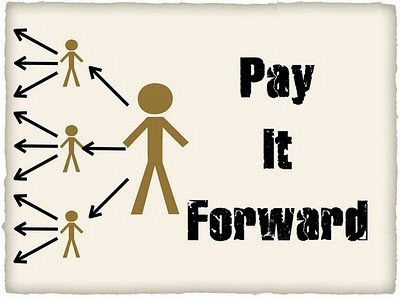 The deets:
Pay it forward 2011: I promise to send something handmade to the first 3 people who leave a comment here.
To be eligible, you must also post this in your blog, offering the same thing to 3 other people.
The rules are that it must be handmade by you and it must be sent to your 3 people *sometime* in 2011. A target date is suggested to keep everybody on the same page.

I think that May 1st is a reasonable date for me to set because I haven't done anything handmade in quite a while!

**Edit**
As of 15Jan, I have no takers *sniffle, sniffle* So please feel free to comment if you'd like a unique New Zealand gift!!
8 comments:

I picked up this flower from a garden center a couple of years ago because it was suppose to be able to withstand drought. I have been trying to find out what it is ever since. In the meantime, I call her Gracie.

If you know what she is, please let me know! 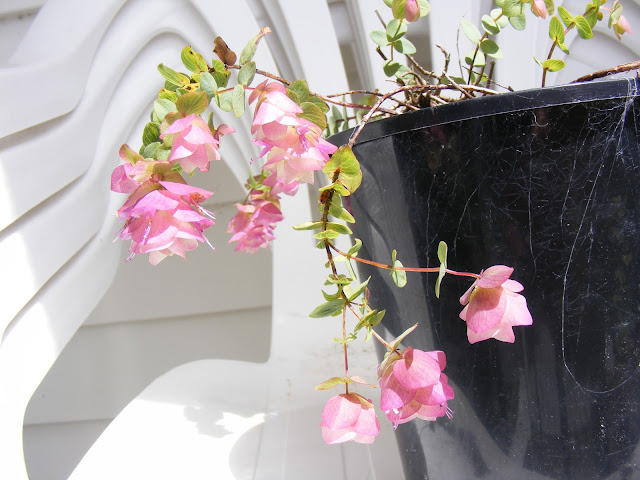 I just realized that I had a bloggiversary in December. My very first, tentative post was in December 2007.

I truly started my blog so I didn't have to bug people 'back home' with email updates. I wanted a place where they could catch up with me in my new life when it was convenient for them. So my first 30 posts, or so, were just to update and compare my US life to my NZ life.

I really didn't get into serious blogging until January 2009, mostly because I had no idea how the blog world worked or that there was so much to see in blogland! I have to credit my very first follower, Netoma, with my first peek into the world of blogging. I clicked her blog and found that she was following me and one other blog that was a meme. Then I clicked that meme and participated in it. And, with a few more clicks I fell into a magical, new world!

Now, here I am, 3 years and almost 300 posts later, with a bunch of faithful followers that I am so grateful for!!

I also have a photoblog called My World through my Camera Lens,
I inherited Best Posts of the Week (that you are all invited to link with),
I post my photos on Soaring through the World in Pictures,
my photos are used occasionally on Write with Pictures

and, although I might never meet you face to face, I consider you, my readers, my friends. Thank you for following my blog and commenting on my posts. It's nice to know that you're there and that you are interested in what I have to say.

I probably would never have delved into this part of the internet if I hadn't taken that risk and moved to New Zealand.

It's funny how things happen.
9 comments: