I can only imagine

If you need a bit of inspiration today, it's here in this video.

Labels: i can only imagine

New things since I arrived - Repeat

I was thinking the other day about things that I never  would  have done if I hadn't moved to a whole new life on the other side of the globe.  As I wrote them down, Hubby reminded me of more.

I'm sure it will lengthen as time goes by, but for now, here's the list of things I never thought I would do:
Looking back over this list, it seems I was saved from a life of boredom.

Stratford has several parks in town and one of them has a pond where people feed the ducks on a regular basis. In fact, this pond was one of the first places that Hubby showed me when I got to New Zealand.

In the 6 years that I have been here and visited the pond, there is always just one white goose among the ducks. I've seen a pair of white ducks on occasion, but never more than the one lonely goose. 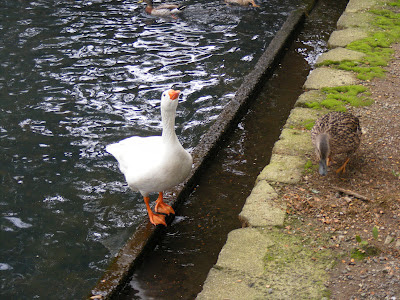 I know that geese mate for life and I guess Goosy has lost his/her partner along the way. But that hasn't deterred him/her from another mate of sorts because Goosy has found a duck as a constant companion. They always swim together. You can tell they are together because the goose will protect the duck from any and all intruders.

I find much solace in this simple observation at the duck pond.

I suppose this could be a life lesson for all of us who would pay attention. If you are willing to take a chance, a true friend doesn't have to look like you.
10 comments:

How the internet works

Labels: how the internet works

Knowing he might be only days away from having to euthanize his beloved dog of 19 years, John Unger wanted a friend to take a picture of the two of them together one last time.

Courtesy Julie McGarvie Unger
"I've taken him for walks on trails that we haven't been on in three years."
The resulting photo of Unger floating peacefully in Lake Superior while comforting his ailing shepherd mix, Schoep, went viral after photographer Hannah Stonehouse Hudson posted it on her Facebook page on Aug. 1. The subsequent outpouring of online donations has allowed Unger to afford treatments to help alleviate his dog's condition, and he is cherishing the newfound time that he has with Schoep. As best as I can guess, the treatments have turned back the clock on his life about a year-and-a-half to two years,’’ Unger told TODAY.com. “I’ve taken him for walks on trails that we haven’t been on in three years. He’s not dragging his back legs like he was before. To be able to do that again with him, words can’t even describe the feeling.’’
The arthritic dog has been receiving weekly laser therapy for the past 45 days in addition to a daily glucosamine supplement and pain pill. Schoep also has a special elevated dog bowl that prevents him from having to lean down as far to eat. Lake Superior is too cold for Unger and Schoep to take any more swims until next spring, but Unger is able to take regular walks with a companion that has been with him since he and his then-fiancee adopted him as a rescue dog nearly 20 years ago.
The viral photo was a game changer.
“Literally overnight, I went to bed and the next day when the photo went viral, it was a whole new ballgame for me and for Schoep,’’ Unger said. “It’s still overwhelming for me in a sense. I knew the amount that was coming in would be way over the limit that Schoep was going to need for the rest of his life. I just thought, ‘I have to give back.’’’

Courtesy Julie McGarvie Unger
Donations from strangers online have allowed John Unger's dog, Schoep, to receive laser treatment for his arthritic condition.
The result of that impulse is the newly-created non-profit Schoep Legacy Foundation, which is dedicated to the improvement of animal and human welfare, Unger said. The foundation has already collected $25,000 in donations. The funds exceeding the cost of the care for Schoep will go toward helping low-income families in the area near Unger’s home in Bayfield, Wis., take care of older pets as well as assist in the spaying and neutering of pets. When the money started pouring in, Unger spoke with Hudson as well as Schoep’s veterinarian, Dr. Erik Haukass, and they suggested creating the foundation.
“Now that we have started this foundation, it’s a pretty incredible feeling that I can help the people in this area and start thinking of other non-profit organizations to donate to or partner with throughout the rest of the United States,’’ Unger said. “I’m just so excited that I’ll be able to give back in some certain way.’’

Courtesy Julie McGarvie Unger
John Unger and Schoep dry off after recently taking their final dip in Lake Superior until next spring.
It is the perfect legacy for a dog has been with Unger through some of the hardest times of his life, including a fateful day on the banks of Lake Michigan years ago.
“I went out on the breakwater and I was thinking about committing suicide,” he told TODAY.com in August. “And I was out there for about an hour just thinking about things and it came to the point of me thinking, ‘OK, this is the time.’ And I looked down at Schoep and I don’t know what it was ... he had a look like no other time he looked at me. I look back at it now and he knew something was wrong.”
Unger did not really have any pictures of the two together, which led him to call Hudson after getting a grim diagnosis from the veterinarian in late July. One photo later and the online community changed everything for a man who said he is new to the Internet and Facebook and does not own a cell phone.
“It’s astonishing the support we’re receiving,’’ he said. “It’s been 6-and-a-half weeks that I have had extra time with Schoep rather than putting him down, and I cherish every day.’’
For more information on the Schoep Legacy Foundation go to www.johnandschoep.com