How warm is it?

We live in what is called a 'micro climate' that is usually very pleasant, although the rainfall
doesn't quite keep our water tank full in the summer. Other than that, it's a very
pleasant place to live.
I got very warm outside trying to weed today--which is unusual for me. So. I checked
the temperature and... 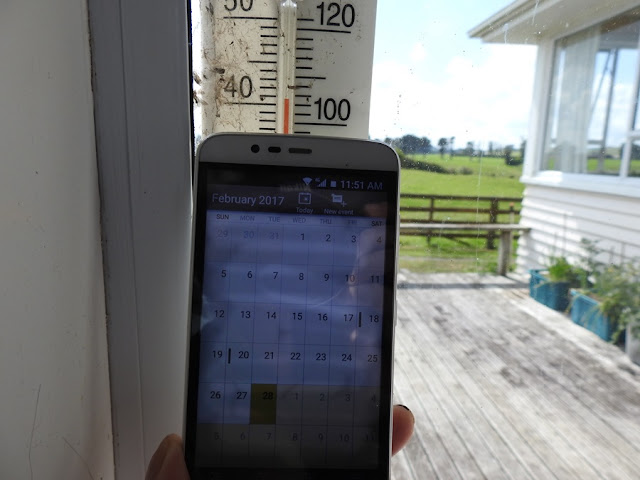 I guess 60+ years of watching tv the same way was a good run. I admit that having the television on as background noise is a habit.

Daytime tv has very little that I care to watch, so housework gets done before or after Dr Phil comes on (when he's being carried by the stations). Then a couple of game shows a little later in the day are company as I chill out after some gardening. Evenings have a few shows during the week that I like to watch but a lot of these were on 'premium' channels (not the free-to-air channels).

Alas, our 'Igloo' box that had free plus premium stations is becoming obsolete as of the first of March. *sigh* We don't think the major cable network is worth the money (we've used it before), and living on a small island gives very few other options.
So, I am being dragged into the world of Chromecast as our (well, my, since Hubby doesn't watch much tv) newest change. It was easy to set up and use, so that helped a lot with the changeover. We haven't decided on any movie packages from the internet but I have found TV on Demand very interesting!

Even with all the internet options, I still feel like I'm cheating on my old way of entertaining myself somehow. But, I'm pretty sure I will get over it soon!