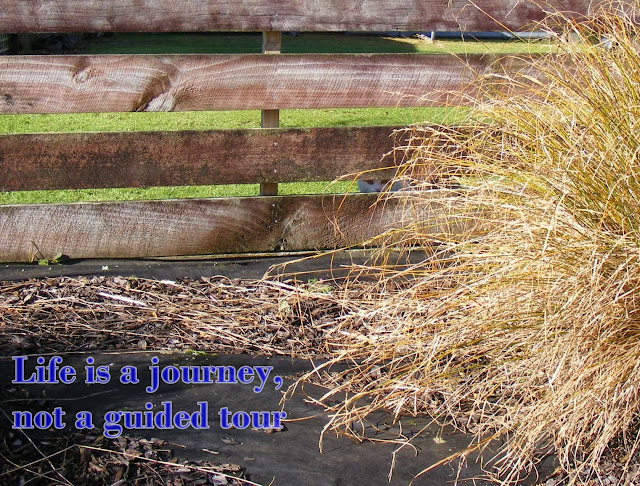 I believe our new addition has discovered that he rules the house.

He has also learned that he prefers inside to out. His latest hour out in the rain came after he (accidentally, I'm sure) jumped out a window that didn't have a bench beneath it. Since then, I can carry him out on the patio and he's instantly finding the door to bound back inside asap! 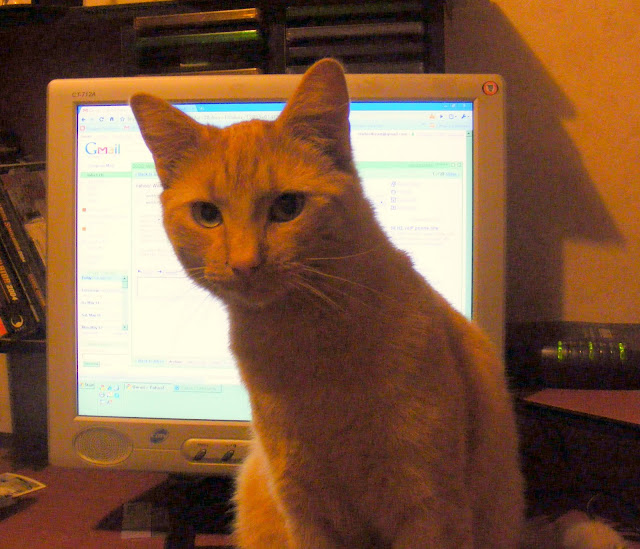 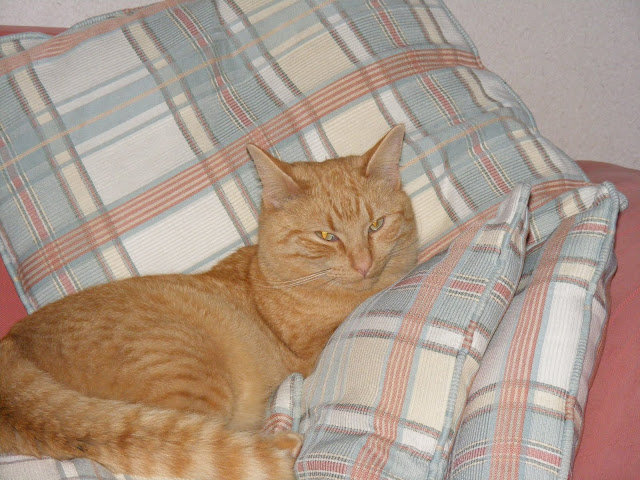 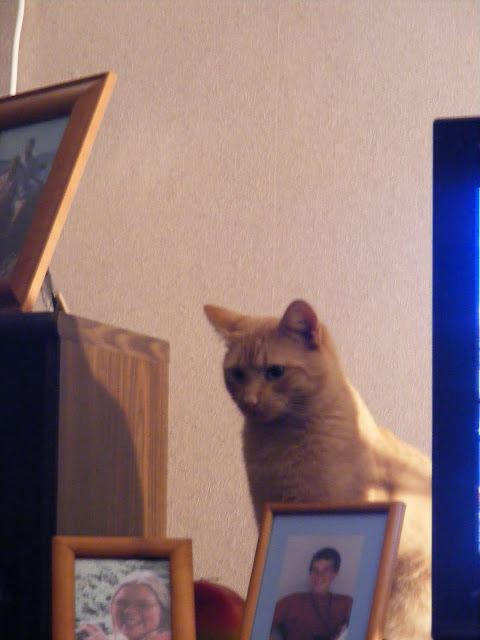 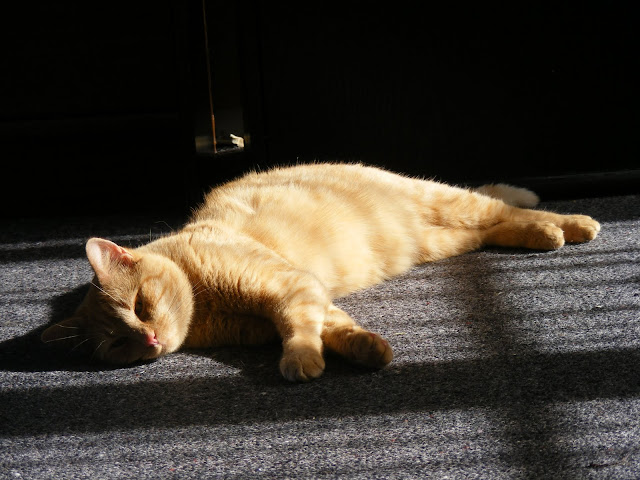 I think he has learned to make himself comfy!

I don't even know why I thought this would be a good recipe when I stole found it on the internet. It sat among my disorganized recipes for months before I decided to give it a try. And, I must say it's a definite change from the bread I have made in the past. It's very moist and is really, really good toasted.


Heat 3 cups of water in the microwave for two minutes.


Stir  and allow to cool.


Allow to begin to froth.


Combine the two mixtures and add about 10 c flour, enough to make a firm dough. Knead for about 2 minutes; put into buttered dish, turn, cover and allow to double in size.


Shape loaves or buns and place in buttered dish to double again.

He's acting as if he were shut in someone's shed for the last 48 hours, but he had no trouble making up for the food he missed!

He simply showed up, crying, at the back door about 9:15pm.

I don't know what's going on, but I think our house doesn't like cats.

Tuesday was the first time Phred went outside. After his first three days inside, he just sniffed around the house--literally, around the outside of the house--and came back in. That made us all happy that he was happy being an indoors cat.

On Saturday night, during a break in our 4 days of constant rain, he meandered outside. We expected him to stay around like he did before. We were wrong. We haven't seen him in over 24 hours now.

I will keep you posted.

The last chapter of Patheticat

As many of you know, Bubba, aka Patheticat, has a penchant for disappearing. And then reappearing at our old house. The kind lady next door would call and let us know he was there.
Well, he did it again. He was missing for over 3 weeks and we figured where he was but didn't know what to do to keep him here if we brought him back. So we sadly decided to leave him be and if he wanted to come back to this house, he'd be smart enough to do that.
And, sure enough, the kind neighbor lady called. He was there. She had him in her garage. We decided to make a half-hearted attempt--just in case he really did want to come home--so Missy and I went to collect him. Surprisingly enough, and completely differently from the other times, he had been eating well and didn't look sad and bony. I guess he has this 'roaming' thing figured out!
So, we did the honorable thing and asked the new tenants of our old house if they would adopt him and they said 'yes'. And another chapter of our life closes.
And, as one door closes, another opens. Hubby and Missy saw a small ad at the grocery store for a ginger cat who needs a home...
Meet Phred the Ginger Ninja. I'm not sure he even knows he has a name yet, but he is our new addition. To our relief, he is much more tolerant of people than Bubba was and the kids get to handle him all they want. 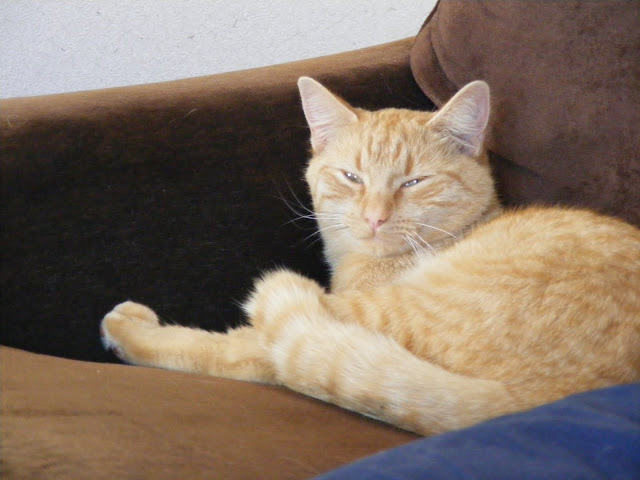 Another tradition has started

Last month for my birthday, I requested that the kids bake a chocolate cake with chocolate cream cheese icing. I had a good cake recipe already and Hubby looked up a great icing recipe for them on the internet. They were quite willing to fulfill my request and they did a fabulous job.☺

This month brings two birthdays, Otterboy's and Hubby's. Otterboy's was first and he requested 'Peachy's Chicken' for his birthday meal and the same cake as they had baked for me. (They call me Peachy because that was my user name when Hubby and I met on a forum board.)

The chicken is simply breast meat cut into cubes, coated in flour and fried in canola oil. I also sprinkle some 'chicken salt' over the pieces while they cook. So that part was easy.

The cake was easy, too. The icing recipe calls for half-and-half, which I have seen in the stores here--really, I have, but it wasn't available either time I needed it. So, when Missy was ready to ice the cake for my birthday, I thought 'thickened cream' (which I had never heard of in the US) might work. And, feeling a bit daring for Otterboy's cake, I used sour cream which was just as yummy. Just for the record, I doubled both the cake recipe and the icing recipe. That made LOTS of icing that frosted and stayed put better than I had even hoped.


When our day of celebration came, we had a hugely decadent chicken and chips (fries) couch dinner while we watched a movie of his choosing and he was exceedingly satisfied!

As we ate this fun birthday meal, Missy put in her order for the same thing in August when her birthday comes around and Hubby has ordered the cake for sure, too!

So, chocolate cake it is at our house and I'm pretty sure it won't be just for special occasions! Both of the recipes are on my recipe page (just beneath the header) or just click here.
10 comments:

Hubby's at it again

I just have to brag a bit about Hubby's latest work. We bought the cabinet you see in the picture below a few months ago, but the right side didn't have a back on the shelf for some reason. I'm sure it made sense at some point, but not to me, so I asked Hubby if he could fix it (I knew he could, it was just a matter of getting the right stuff) and this is the result.
I am so happy with how it matches the 'wood grain' with the original. His side is a bit lighter, but it's really not as noticeable as it is in the photo. I am a happy camper. 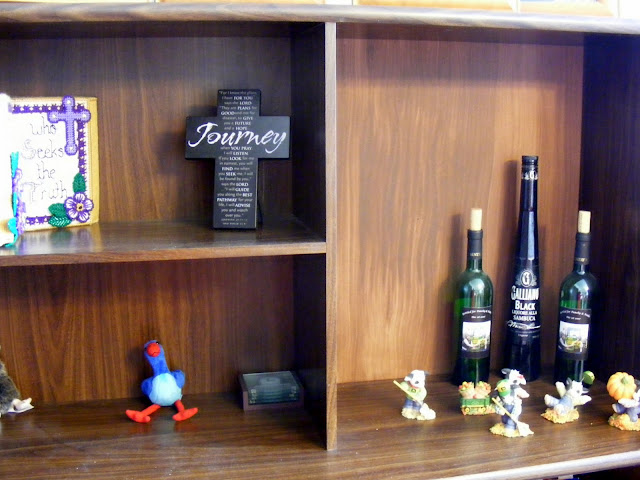