My neighbors are ignorant as well as rude

We moved into a new rental home just before Christmas last year. The neighbors next to us seemed friendly enough. The Mom works at a local store and always has a smile on her face when I see her. In a quick introduction over the fence, the Dad seemed nice and jokingly mentioned something about the neighbors not being shy about calling ringing 'Noise Control' [the district agency (for a lack of better word) that you call ring up when your neighbors are being noisy] on him and his kids. That should have been a red flag, but I guess I still want to see the positive and I didn't stop to figure out what that really meant.

We live on a corner and we really didn't (and still don't) see the neighbors behind us out and about much. One day, I saw the lady who lived there and asked her about a cat that was always looking in our windows. She was very pleasant and it turns out it was her cat, but I still think it lived at our house at some point.  Anyway....it also turns out that Hubby works with the son who has moved back in with Mommy and Daddy.

In my mind, it's very simple. If loud music were acceptable, then there would be no 'Noise Control' to call. Duh. So, when I took all the bass thumping above the sound of the TV I could handle I called. And called.Yes, and called some more.

The neighbors beside us eventually called the police to see whether or not we were harassing them by calling so often. We weren't. They finally got the message.

The neighbors behind us still play music loud on occasion. They didn't get the message. However, they really proved their ignorance last week after Phred died. Missy called from her Mum's house when Phred was missing for about 2 days to see if he was here. She said that the granddaughter of the neighbor behind us told her that someone had seen his body, but they didn't know who he belonged to.

When Missy came to our house at the end of the week, the first thing she said was, 'I have changed what I think about the neighbors behind us.' It seems that, when the granddaughter told them it was our cat, someone (I assume the dad, who is the one who plays the music) told her that if he had know it was our cat, he would have scooped it up, gift-wrapped it and brought it to the door as a gift for calling Noise Control.

All this makes me hope that my family is right when they say it's probably just Taranaki Kiwis who are rude. I do hope that when we move away from Stratford in a couple of years they are proven correct.

What is wrong with this picture? 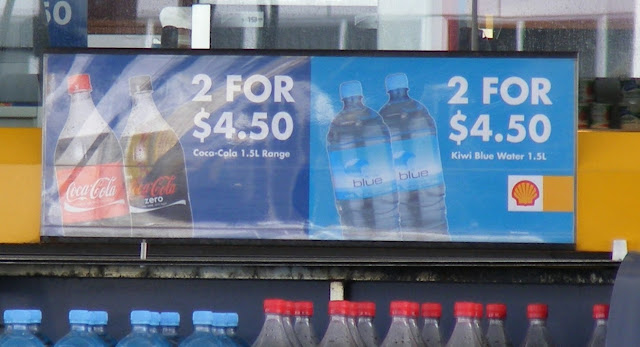 I saw this sign at a gas petrol station and couldn't believe my eyes! Coke and water, the same price!! This is suppose to be one of the 'most unspoiled unspoilt' countries on earth and people pay for water--especially at that price?! Kinda makes you wanna go, 'Hmmm...'
5 comments:

There are no peaches in this recipe. It's called Peachy chicken because that's what the kids call me!

My family adores this simple recipe.

You can use any amount of chicken that suits your family.

Cut chicken breast meat into cubes, about 1.5 inch (about 40mm) cubes.
Dredge chicken in plain flour, covering completely.
Add chicken pieces to hot oil in pan.
Shake 'chicken seasoning salt' onto pieces and fry until brown (5-10 minutes).
Place in bowl lined with paper towel to absorb oil.
Serve alone as a snack or as part of a meal.
No comments:

If you click 'My recipes' at the top you will find my re-worked page for my recipes. They are in alphabetical order and linked to separate pages now.

I have made a slight addition to the Apricot Bites recipe and added a new recipe for Caramel Popcorn. We tried it the other night and it has a light flavor to it--just enough to want to keep eating until it's gone!
2 comments:

Another farewell, all too soon

It seems like just yesterday that Phred came into our lives and just as quickly he is gone. Apparently, he lost an argument with a car over the rainy, dreary weekend.
This is how I will always remember him, in his favorite resting spot--just beneath my chin.
Rest in peace, my friend. 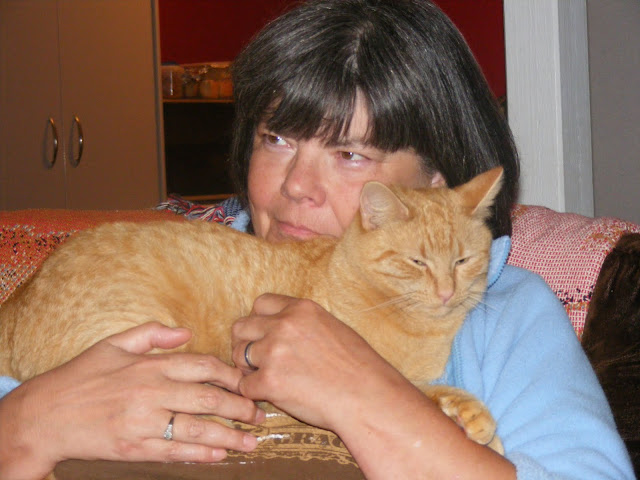 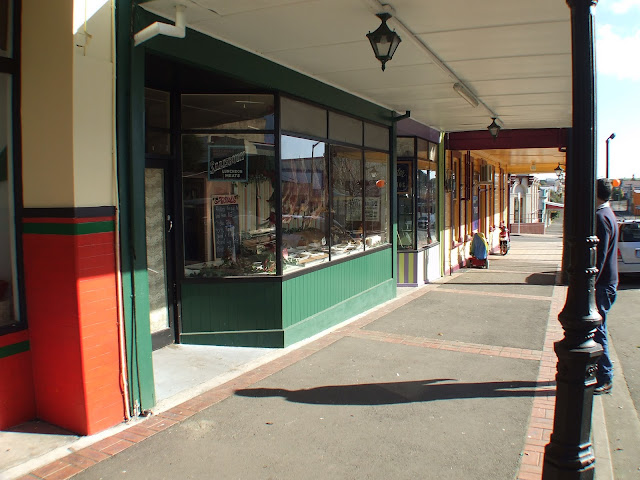 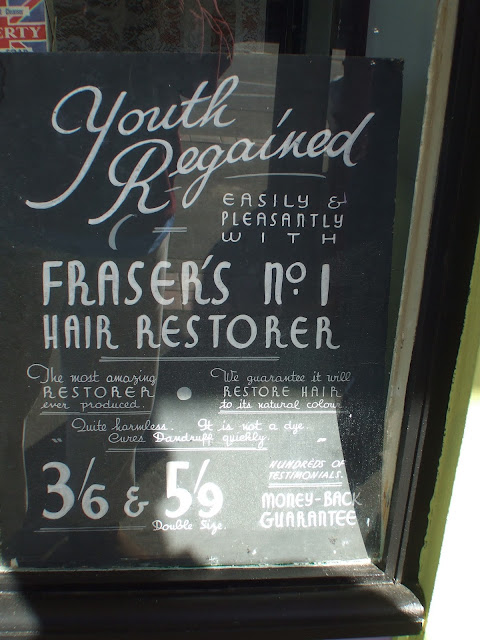 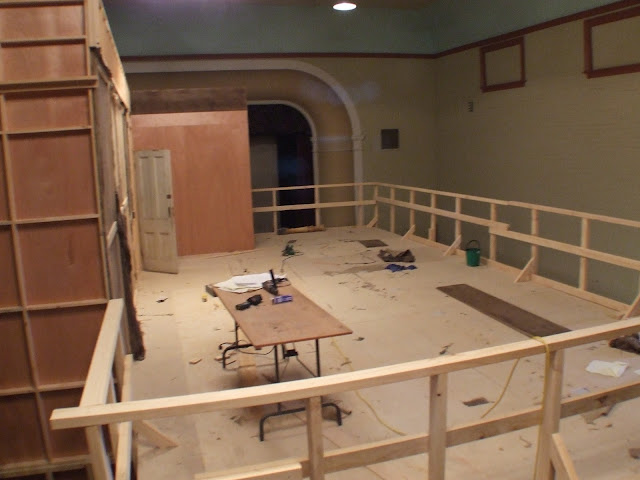 I have no idea if you will ever get the chance to see Predicament, but if you do, I think you won't hate might like it, as long as you are comfortable when viewing it. I don't think it will win any Academy Awards, but it was a pleasant hour and a half.
3 comments:

The next time you feel like GOD can't use YOU, remember,
Noah was a drunk
Abraham was too old
Isaac was a daydreamer
Jacob was a liar
Leah was ugly
Joseph was abused
Moses had a stuttering problem
Gideon was afraid
Samson had long hair and was a womanizer
Rahab was a prostitute
Jeremiah and Timothy were too young
David had an affair and was a murderer
Elijah was suicidal
Isaiah preached naked
Jonah ran from God
Naomi was a widow
Job went bankrupt
John the Baptist ate bugs
Peter denied Christ
The Disciples fell asleep while praying
Martha worried about everything
The Samaritan woman was divorced, more than once
Zaccheus was too small
Paul was too religious
Timothy had an ulcer...
And Lazarus was dead!
2 comments:

They do things differently here

High school teachers all over the country had a strike day on Wednesday.

That's all, just one day.

I was under the impression that they were striking because the classroom sizes are out of hand and they want smaller classes. But most of the newspaper articles say it's for more money. Hmmm.

I remember when I was in high school, the teachers went on strike. We had to show up every morning for attendance and then we went back home. That lasted a couple of weeks I think (hay! That was a long time ago and Methuselah would be hard pressed to remember that far back). But they did get what they wanted.

Apparently, the one-day-at-a-time strike works, since it worked the last time the teachers did it, back in 2002, but it sure isn't the way things work in the USA.
2 comments:

This huge garden was just placed in the hands of the Taranaki District Council from the Rhododendron Trust and the entrance is now free.

We were out there last week, but the garden has some work to be done before the Rhododendron Festival in October.

I'd like to share some photos from our first visit in 2007. These photos were taken on a very cheap camera that I brought from the US, but will definitely have new shots in a few months. 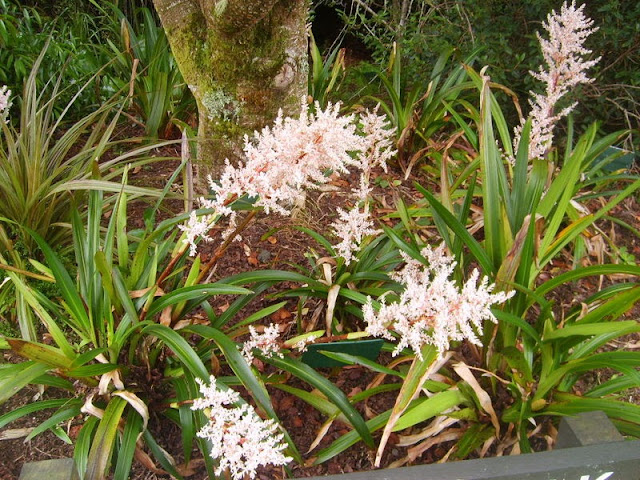 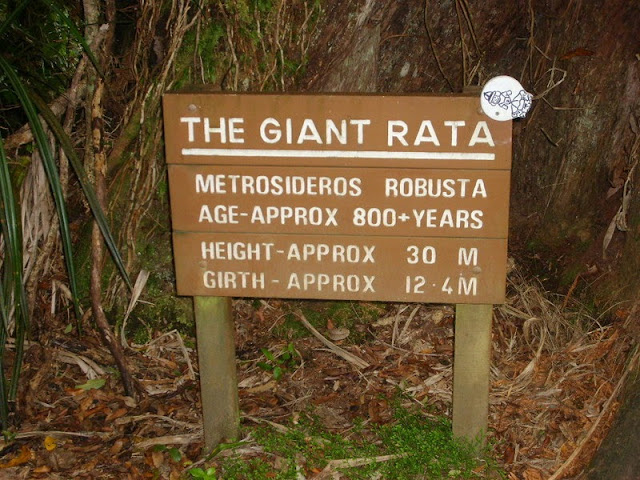 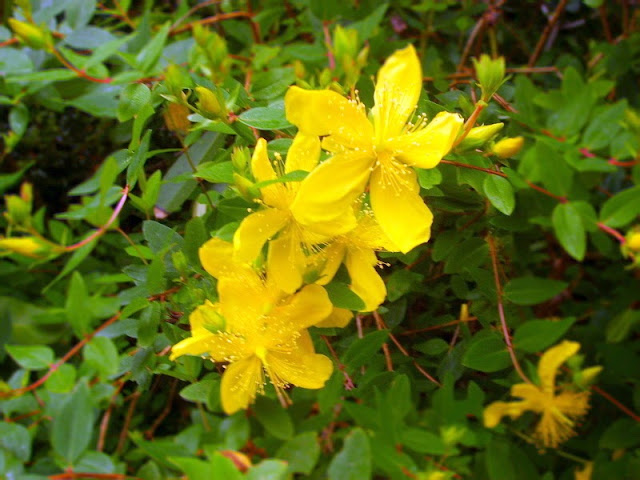 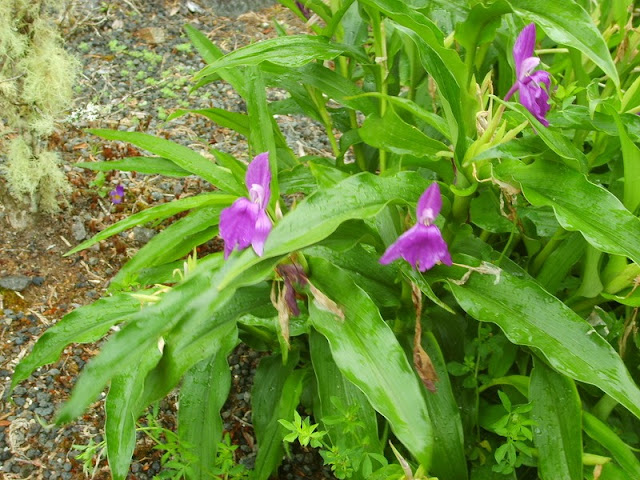 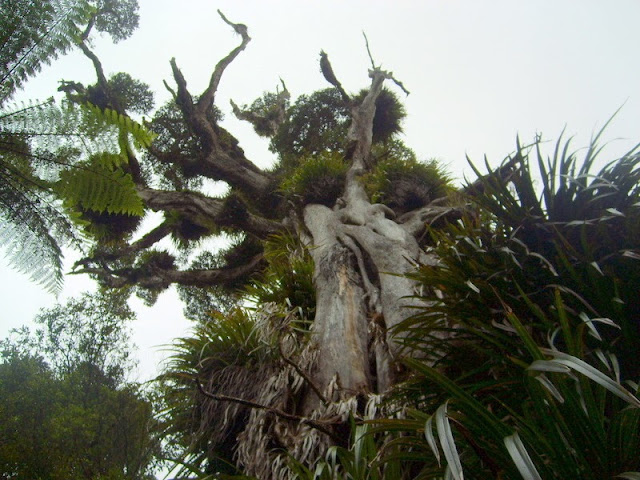 We would hear this awful scraping. Turned out he was scratching the window trying to get our attention to let him in.
3 comments:

This would definitely liven up the office!

There's a place in New Plymouth called 'Pig Out Point'. I'm sure it's not on any map, but the locals know it well.  The name derives from the fact that it is basically a big parking lot that people go to eat their takeout takeaways from the fast food restaurants just a few blocks from downtown CBD (central business district). 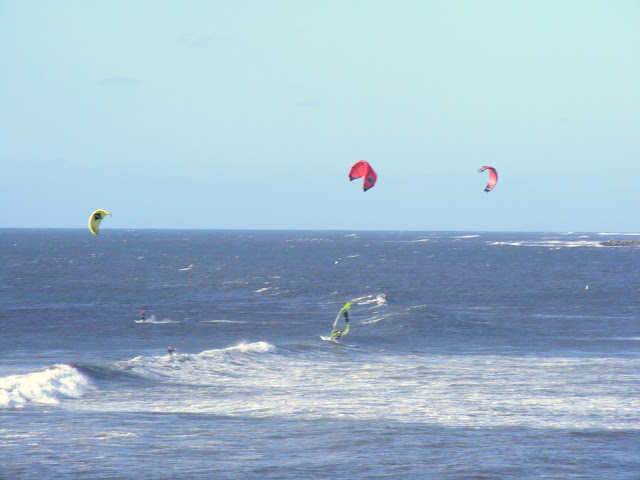 Mostly, you can entertain yourself for hours--or, at least, as long as the gulls and ducks are  hungry--by feeding the local winged residents. 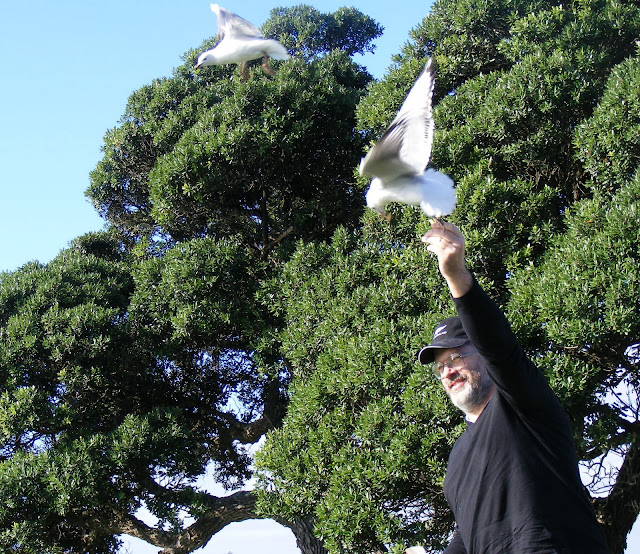 I like to take photos of the little buggers and then photoscape them. 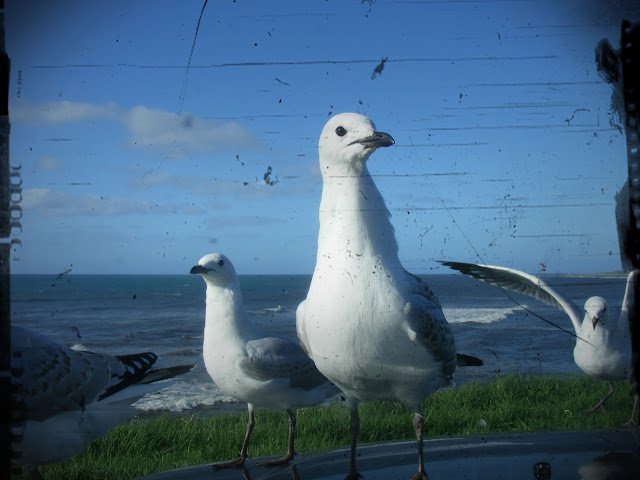 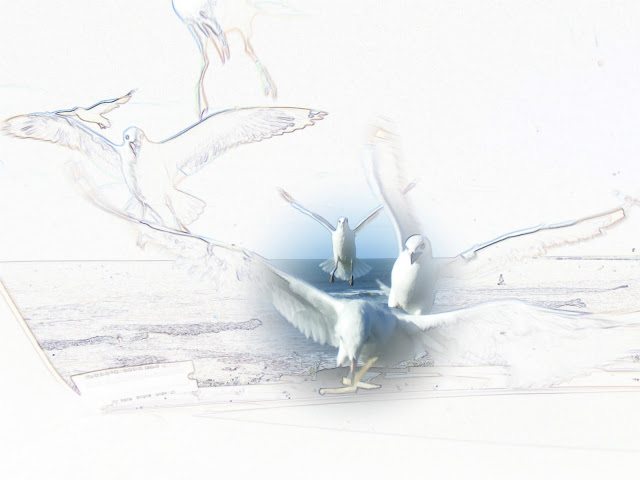 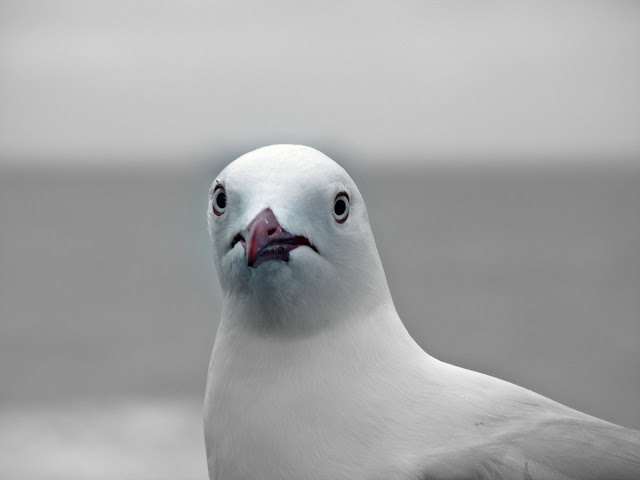 The link below is an awesome page. It's called 'let me google that for you'.

When somebody can't be bothered to google something but knows you will, you can type in the question they asked and then show them how to do it!

For instance, I typed in 'what color is vermilion?' and then got the link that was created. Copy and paste it to see what happens..

Wow! I didn't know that news of NZ made it to the civilized world so fast!

It's humbling to see so many people showed concern by email. I am truly touched. Thank you.

For those who are still wondering, I live between New Plymouth and Hawera in the North Island.  The earthquake was about 30k outside of Christchurch in the South Island. I had to hear about it on the telly after I got out of bed! 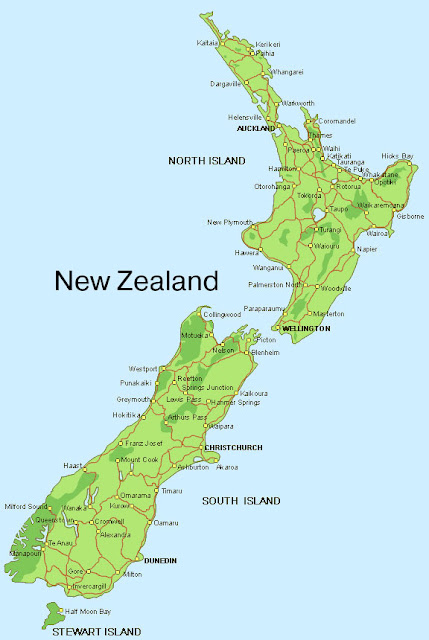 Thanks again for those who showed such concern!
7 comments:

As you know, Phred is a very laid-back cat. He doesn't demand any special food--just a bit of milk, occasionally. Other than that, he's content with his dry cat food.
That is, until I leave something on top of the stove and his curiosity gets the best of him.
The other day, I had cooked a pot of pinto beans with a big pork bone. The beans were done and I turned the pot off to let them cool down.
I then proceeded to go about my business, never giving the pot another thought because there was never a reason to worry. Until I heard a dull thud in the kitchen.
Good ol' Phred had quietly crept around on top of the counter (unlike Bubba) and pulled the pork bone out of the pan and onto the floor!

I was so shocked and amazed that he got such a big bone out of the pot to begin with that I just threw it out on the patio where he could munch away at his own pace! There wasn't much else to do with it. Or him. 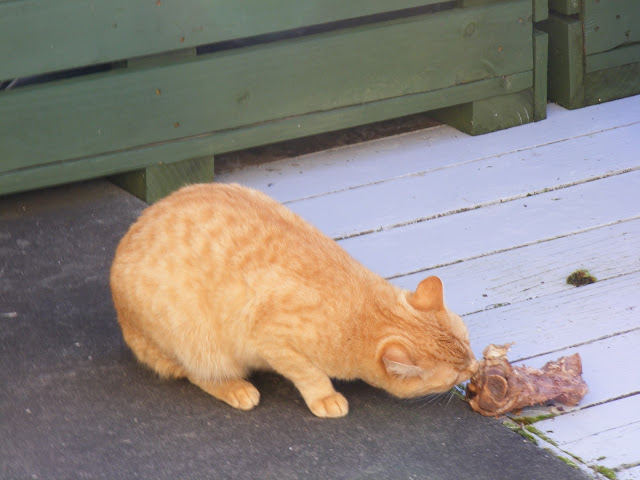