It's weird living in a wee country that you lose a day of your life getting to. You find that you have taken most everything around you for granted.

Like television. In Kansas, I knew that the shows I saw were relatively new. I always figure the American shows we get here to be those that didn't make it very well--you know, the ones that TVNZ can buy cheap, after all, this is a small country with a small budget for EVERYthing. So, I was surprised to find that "Legend of the Seeker" is only a year old. Some of the BBC stuff on The Documentary Channel (Doco, in Kiwi) is 6 or 8 years old. On the bright side, all the BBC stuff is new to me.

OTC Sleep aids. I got something for Hubby last year and had to give his name and address because it is a "pharmacy only" medication. That's sort of halfway between a prescription and the first-aid cream and tylenol. As for myself, the only ones that work have doxylamine in them and they don't sell that in any form here.

We also have a Kiwi version of Monopoly, which is kinda strange for me, but fun.

I found a NZ cracker that is exactly like a Ritz. It's called Jatz. I can even find Ritz brand occasionally.


Dairies here are convenience stores--without the gas pumps. There are several in each town, even the smallest of places.
Pudding here is dessert. So when we have instant pudding for dessert, it get very confusing.
Even though this is a 'metric' country, they measure television screens by the inch. And eggs are sold by the dozen, not by 10s.

Main streets here are referred to as High Street, no matter what they are named.

There are about a billion types of cheese that you can get here (ok, not that many, but there are a lot, since dairy is one of the top exports). But, I have been trying to find my favorite, Muenster, ever since I arrived.  Hubby tries very hard to help and we have found some that are very good and a couple that are pretty close. Without his encouragement, I don't think I would have bothered to try new ones.

Different attitude  Any vehicle doing anything but driving straight down the street is subject to being passed, whether you're waiting for a space or slowing down to turn. Room is made on all the streets for this, with lanes for all traffic. Also, drivers here don't stop and let another car out of the angle parking along the main street, unless, of course, they want the parking space.

I don't think it will be any time soon that I just fall into step and take my new homeland for granted.

the start of a new garden

We have been at the new house for about three months now and the bulbs and seeds that we brought with us have become very happy indeed! I thought I'd share our container garden with you. They have dahlias, impatiens, carnations and the train that Hubby made has begonias. The other plants, I have no idea of names, but I bet you can help me out! 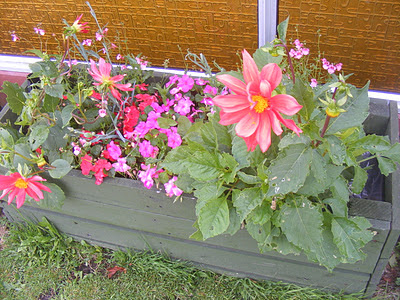 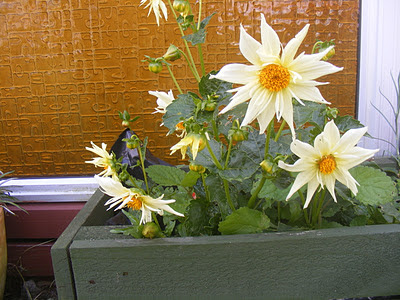 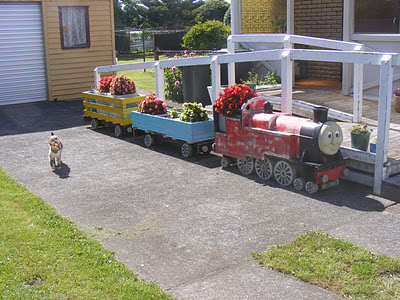 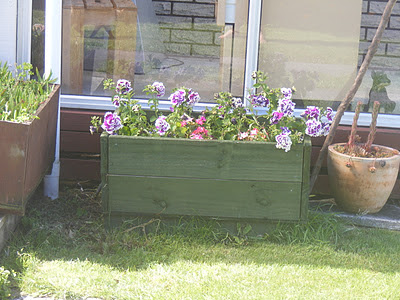 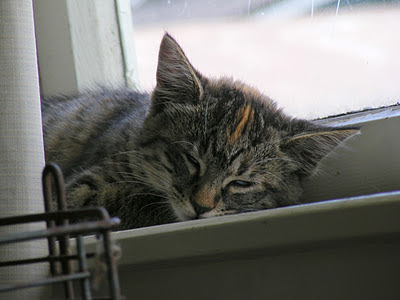 We have a new addition to the family. It was by default, but nevertheless, she's here.

Let me introduce you to Wheelie! (Because she's wheelie stinky when she farts!)

She was thrust upon Otterboy by a local personage last week when he stopped to pet her on his way to town. We put up a 'found' poster but got no response so she's now part of our family.

She has wasted no time making herself at home.
5 comments:

There's so much in this huge world to see that I will never see with my own eyes. Who'da thought 40 years ago that I would be able to visit Siberia or see inside a cell or into outer space?! I am grateful for those that bother to share their world with me.

That's why I like to share my photos with those that will never make it to NZ. And for those that set up memes to help me share them without any fuss, a big thank you.

Of course, I find some of the places I visit in the blog world a bit like the old-maid teacher who has lost all reason to smile. I am probably old enough to be most of those blog owners' Mom and I don't appreciate being treated like I can't get out of the rain.

Some meme hosts demand (they say they don't demand, but you know they do) that you only link to their meme if you join them. Excuse me, but the internet is not some place you can censor and tell me how to write my blog. My photos are interesting, IMHO, and I will share them with whomever I want. I will link to whomever I want. And, it's not you.

Then there are those that won't allow you to right click anywhere on the page, even on the link you want to share. I understand the reason for it, but let's face it: If you put it on the internet,  there are no guarantees on what happens to it. And it's a long road to sue somebody for stealing it, so if you don't want to worry, don't post it.

Also, I'm sorry, but I am not going to type out the whole link just to have it be misspelled by one letter and have to do it again. And, what do you think you're accomplishing? I haven't tried, but I bet I can steal your stuff without right clicking and I'm not even a geek. I don't link to your memes, either.

For those that understand how the internet works and the possibilities it presents, I thank you for your spot in cyberspace where I can interact with others without being treated like I need help with my homework.

And for those that actually encourage you to use their posters and photos by telling you they are free to download, you are top of the list in my book!

I guess anywhere you go where there are people you will find both extremes. If you find a place without the sourpusses, let me know.
1 comment:

I love to check my feedjit and stats occasionally just to see how folks end up on my blog. I am happy to announce that there has not been one search for 'rude kiwis' or 'are kiwis rude' for about five days now!

There have been about 12 searches that ended up at my 'pay it forward' post.

And there were a few visits from a blog that I have never heard of before, which is a bit disconcerting.

Several Kiwis checked out my post about the memorial to the homeless lady.

There were quite a few visits to my recipes, too.

All in all, the internet is a weird and wonderful place.
2 comments:

Back to the grindstone

Over the holidays, Otterboy is in the 6-week break between school years and Hubby took 2 weeks off work. Since I don't really get a day off (...a woman's work is never done, you know!) I requested a week of no dishes and got it! That was a heavenly week, let me tell ya. And the dishes were done without complaining or reminding each night. I have the best guys!

Otterboy and Maniac (his best bud) are pretty much inseparable these days and it's good they have each other to help with the entertainment since we stayed in Taranaki for the holidays.

The two of them went swimming while Hubby relaxed in the spa pool and I wandered about outside taking pictures a few times.

At one point, the three of them went up Paritutu (<- click for photos) for some fresh air and exercise. I don't do climbing, thank you. We were in New Plymouth again later, just Hubby, Otterboy and me, and the two decided to go up again. Apparently, Hubby met somebody to chat with half way up while Otterboy went up and down twice!

We also had plans to go to Kai Iwi, near Wanganui (that's barely outside Taranaki) because they have this huge flying fox that they kids love to ride. But the weather was not great and the two boys ended up swimming there, which they didn't seem to mind at all, while we went to find a cup of coffee and then to the winter garden (<- click for photos) at the local park. After that, Hubby found us a picnic shelter where we had our late, leisurely picnic lunch. But, I think the boys liked driving through huge puddles the best :)

Of course, between little trips and the rain, there was the PS3 for the boys and a bit of gardening for us all, which made for a very laid-back two weeks. I think Hubby got rested before he had to go back to work today.

And to think that we entertained ourselves as kids without huge water slides and interactive machines. I'm not sure if those were better times or not.
5 comments:

Everything I need to know, I learned from Noah's Ark

ONE: Don't miss the boat. Be flexible enough to see what's going on around you.

TWO: Remember that we are all in the same boat, so be kind.

THREE: Plan ahead. It wasn't raining when Noah built the Ark.

FOUR: Stay fit. When you're 60 years old, someone may ask you to do something really big.

FIVE: Don't listen to critics; just get on with the job that needs to be done.

SIX: Build your future on high ground even if it doesn't make sense to others.

EIGHT: Speed isn't always an advantage. The snails were on board with the cheetahs.

NINE: When you're stressed, float awhile. Sometimes, you miss an opportunity by trying too hard.

TEN: Remember, the Ark was built by amateurs; the Titanic by professionals.

ELEVEN: No matter what the storm may bring, with God, there's always a rainbow waiting.
5 comments: