I started this blog about a year before I found my way around blogland, long before you wonderfully followers and readers found me. There were a few interesting things you might have missed, so I thought I'd pull up a few highlights.  This was an article in the paper just a few months after I got here. 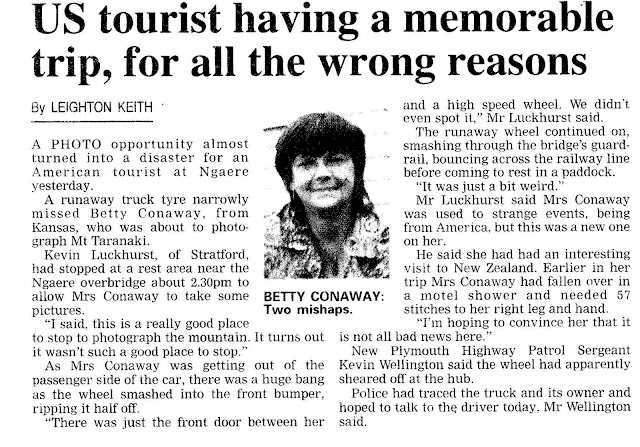 Now, every time we go by that particular rest stop, one of us invariably mentions something about a tire tyre!

And the total count for the stitches was 60, not 57 (that's what the doctor counted putting them in--60 was the nurses' count when they took them out).

It seems that I have settled into my new homeland quite well. After all, it's been almost 5 years since I started on this new journey.

My new life has taught me many new things.


And all this show me that I'm never too old to learn new things (even at my age of 'older than dirt').

I don't feel comfortable discussing my personal life on my blog and the culture shock has worn down a lot, so it seems I may be running out of things to share with you so often. No, I won't stop blogging here--it just means that my posts may be further apart than they have been.

I will, however, still be posting photos regularly to entice you to visit NZ on Photographing New Zealand (click for link)  and I will be trying to inspire the world more with the photos on incidental imagery (click for link) so be sure to stop by those blogs occasionally to see what I've been photographing.

There was a memorial service for the city of Christchurch today. I don't usually watch this kind of tv program, but this one was really moving.  Here's what the local paper had to say about it.


They came in their thousands, the family, friends and loved ones of those killed in the Christchurch quake, to be told that "grief is the price we pay for love".
Prince William's beautiful, simple words, echoed across Hagley Park today as the country stopped to remember the terrible devastation brought by the quake which struck at 12.51pm on February 22.
People came sporting red and black, ignoring the terrible carnage that still impacts on everyday life, to mark the loss of at least 182 lives.
Four more quake victims were named this evening. They are; Mary Louise Anne Bantillo Amantillo, 23, of the Philippines, Ian Foldesi, 64, of Christchurch, Linlin Xu, 26, of China, Naon Yu, 21, of South Korea.
It brings the total number of names released to 146. Police expect the final death toll to be 182.
The crowd gave rescue workers attending a rousing standing ovation before the service started and talked among themselves about their own experiences.
The ceremony officially began with a Maori warrior blowing on a conch shell, stirring the crowd to attention.
Prince William, wearing a korowai given to him by Ngai Tahu especially for the service, was joined by other dignitaries including Prime Minister John Key and his wife, Bronagh, Australian Prime Minister Julia Gillard, the Governor-General Anand Satyanand and his wife, Susan, Mayor Bob Parker and his wife, Jo Nicholls-Parker, and Labour leader Phil Goff.
However, the ceremony was firmly all about the people of Christchurch. 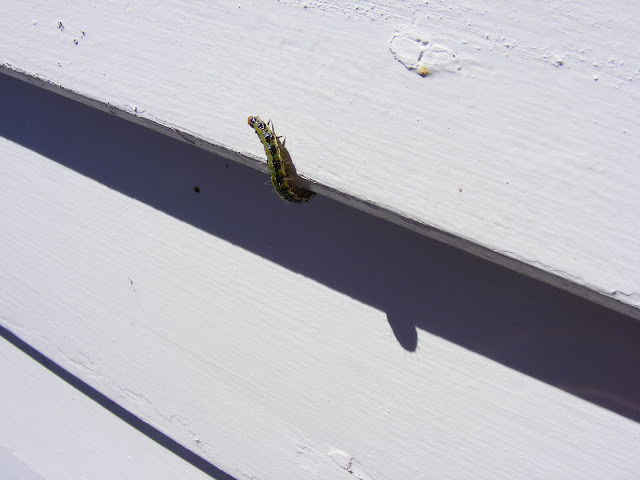 This guy and several of his siblings are climbing all over one wall of our house to find a place to become a chrysalis to hang out on the side of the house.

I think it might be for a white butterfly, but that's just a guess. Does anybody else have any idea what this is the caterpillar for?

**EDIT**  I should have asked Hubby in the first place, as he's the one who found a definitive answer for me--thanks, Hubby!!!

This is the caterpillar for a kowhai (ko-fie) moth  http://www.landcareresearch.co.nz/research/biosystematics/invertebrates/invertid/bug_details.asp?Bu_ID=127
11 comments:

thought on this and that

Why do I have to enter a code on my tv to watch adult shows but anybody with my remote can upgrade or change my service without the code?

And why does the high school still make the students make title pages for reports? They did that in grade school and Otterboy is not happy about still doing it in 10th grade year 10. I don't blame him a bit.

I wonder, what it is about NZ that makes pine trees grow so much faster here than anyplace else in the world.

According to Nigel Latta, teenagers are brain-damaged but will outgrow it. That's a little bit of information that I cling to. He suggests treating them like you crazy uncle who doesn't really mean what he says or knows what he does. I like that.

There is snow on Mt. Taranaki--already. It seems like we only had two weeks of actual summer weather! I know we had more than that, but it sure doesn't seem to last as long as summer when I was a kid.

Why am I surprised that the NZ school system is adjusting the whole country's classes because the Rugby World Cup is coming to NZ? Maybe I have to be a rugby fan to appreciate it. All I know is ONCE AGAIN the NZ school system sucks by putting anything and everything  before the education of our children.

It must be slow news in NZ if Charlie Sheen makes headlines.
8 comments:

There aren't many TV shows or movies that are produced in NZ. Oviously, there are not the resources available to produce shows like there are in the US. I am rather picky about what I watch and a few new series don't appeal to me. I have, though, watched two NZ series to the end, both of whose plots I found quite intriguing.

'The Cult' was about a group from very different life-styles who were each trying to get loved ones from a place called  'Two Gardens.'

This is Not My Life' was about people having their memories replaced so that they could fulfill someone else's destiny  in a place called Waimoana. I hope this one has a sequel, but I'm not holding my breath.

Now there is another one,  The Almighty Johnsons' which has a very creative plot--the NZ family is really Norse gods reincarnated.

I think all of these programs have great plots. All of them. But I think they all would have held more Kiwi attention to the end if they had only been 4- or 5-part mini-series instead of ongoing shows. As in most shows, they have to fill a lot of time that isn't always related to the plot and that is where they lost their audience, me included. I've already stopped watching the Johnsons.

But on the bright side, NZ telly is offering a larger choice of American shows, even if' MacGyver' has just taken the place of 'The A Team' and 'Friends' is  in an infinite loop of reruns in no particular order. 'Fringe' comes and goes, as does '11th Hour', but 'Drop Dead Diva', 'Bones', 'NCIS', 'Cold Case', 'Without a Trace' and 'Criminal Minds' are running strong.

BBC shows a lot of programs, but it's amazing how much I don't understand with a British accent and idioms. I do like 'Midsomer Murders' even if the area of Midsomer should have no residents still alive by now.

Of course, this is all subject to change tomorrow--which would not happen in America without a good reason. Oh, well, at least it keeps me on my toes.
4 comments:

I don't know how many times I've been asked this question:

"If you could talk to any historical person for one hour, who would you choose?"

I'm sure my answer depended on my mood at the time because I really don't have one particular historical figure that I would care to speak with. Today, I think I would choose Charles Darwin to see what he thought about his 'theory' becoming absolute fact even though Chuck specifically said it was just a theory that would prove itself right or wrong in 100 years.

Now, if you asked me what Biblical character I'd like to talk to, that answer hasn't changed in many years. My choice is not any of the obvious people. In fact, my choice is an assumed person who is not even mentioned specifically. Let me explain.

Since the Bible is not meant to be a total history of the world, but only meant to tell us what we need to know (the gist of the story, if you will) then I don't think God minds if we fill in some details to help us understand some of Jesus' illustrations. My character comes from some of the embellishment that has been handed down through generations of Sunday School teachings. It's from Matthew 14, and it goes something like this:

After a long day of miracles and having 5000 people watching their every move, the disciples asked Jesus to send the throng on their way so they could eat, but Jesus told them, "They don't need to go--YOU feed them!"
Disciples: "We don't have any food for US, much less all of them! What do you  suggest we feed them with?"
Jesus: "Well, what do you have?"
After some asking around, they found a boy who's mother had packed him a lunch basket before he went out to fish  for the day. All he had left was 5 small loaves of bread and 2 little fish.
When they reported back to Jesus, He said, "That's cool. Bring it here."
Then Jesus blessed the food they had and it was enough to feed everybody with 12 basketfuls left over.

Now, of all the people in that story, I'm sure any of those mentioned would be exciting to talk to--they all would have been excited to have participated in such a miracle--especially The Boy with the lunch. But, out of all of those involved, I would like to talk to the kid's mother and see what her reaction was when he brought all that food back home!

Otterboy made fun of my ringtone the other day.  It's the Mighty Mouse theme song....

Here I come to save the day!!