There are definite advantages of living in a country that has few political connections and even less political prowess. The stress to win is not as felt as a nation as it is in other countries.

Don't get me wrong, I'm sure our Olympic team has it's pride and wants to win as much as any other Olympian and I would be proud for them if they did win.

What's that, you say? You didn't even know we had a team?

Well, yeah! Duh! And we even have a webpage about them! Click here, all ye who doubt. Ha!
No, we don't make headlines with medals. (OK, it would be a BIG headline here if we did!) and I will be the first to admit that I had no idea what a Skeleton was.  But we are in the game. And here's the schedule and results to prove it...click here.
I have included a bit of trivia for your further amusement.

The word "mogul" comes from the Austrian word "mugel," which means "small hill" or "mound."

The men's 2006 gold medal winner, Russian Yevgeny Plushenko, is the first skater in history to successfully land a quad-triple-triple jump combination in competition. Canadian Kevin Reynolds, 17, achieved the feat in 2008.

Curling is one of four winter Olympic sports contested indoors. The other three are hockey, figure skating, and speed skating.

German luge master Georg Hackl is the only athlete to medal in the same event in five straight games.

Nordic combined is one of two current Olympic Winter Games events in which the United States has never won a medal. (Biathlon is the other.)  US won a silver medal this week!

American Jennison Heaton won the first skeleton gold medal in 1928, beating his brother John, who took the silver, by one second. John Heaton, at age 39, went on to win the silver again in 1948, finishing second to Italy's Nino Bibbia. American Jim Shea, Jr., won the men's gold in the 2002 return of the sport to the Olympics. The 2002 Salt Lake City Games also witnessed the debut of women's skeleton.

Ice hockey made its Olympic debut at the 1920 Summer Olympics in Antwerp, Belgium. The first Winter Olympics didn't take place until 1924.

At the 2006 Turin Olympics, American Shani Davis became the first African-American athlete to win gold in an individual event, the 1,000 m. He also took home silver in the 1,500 m event. Davis is the tallest American speed skater, standing at 6'2" tall.

American skier Lindsey Vonn was awarded a cow by local dairy farmers for her World Cup win in Val D'Isere, France, in 2005. She had a choice between the cow or an additional $1,200 in prize money. She went with the cow.

It's been 22 years since the Jamaican bobsled team made its debut at the Olympics.

The oldest man to receive a Winter Olympics medal is 83-year-old Anders Haugen. The Norwegian-American actually received his ski jump bronze medal 50 years after he competed in 1924 when a scoring error was discovered in 1974.

Winter Olympics Through the Years

The Shea Family of Lake Placid, New York, is the first to produce three generations of Olympians. Father Jack, 91, was a double-gold medalist in speed skating, son Jim, Sr., was a U.S. ski team member at the 1964 Innsbruck Games , and in 2002 grandson Jim, Jr., won a gold medal in skeleton.

Only two countries south of the equator have ever won medals at the Olympic Winter Games—Australia and New Zealand.

Legends Eric Heiden and Dan Jansen, as well as current stars Chris Witty and Casey FitzRandolph, are from the same U.S. state, Wisconsin.

Norway has won more gold medals at the Winter Games than any other country.
Stolen from infoplease.com

I'm sure you know by now that we are train enthusiasts. Not as enthusiastic as these great folks at Glenbrook Vintage Railway, but we do enjoy trains. The ride on the train takes you to their workshop where they are restoring other cars and engines. 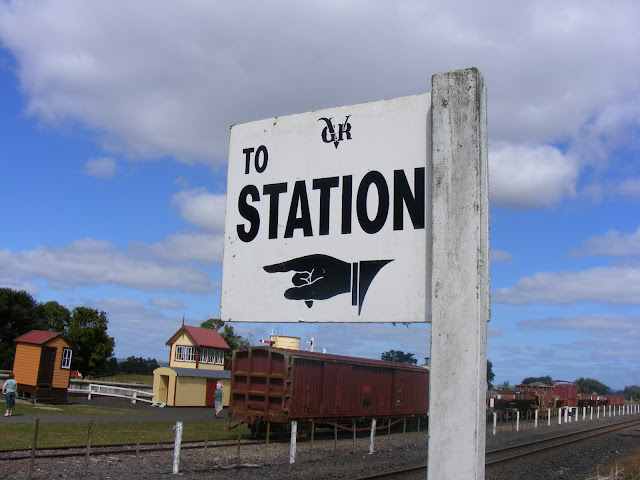 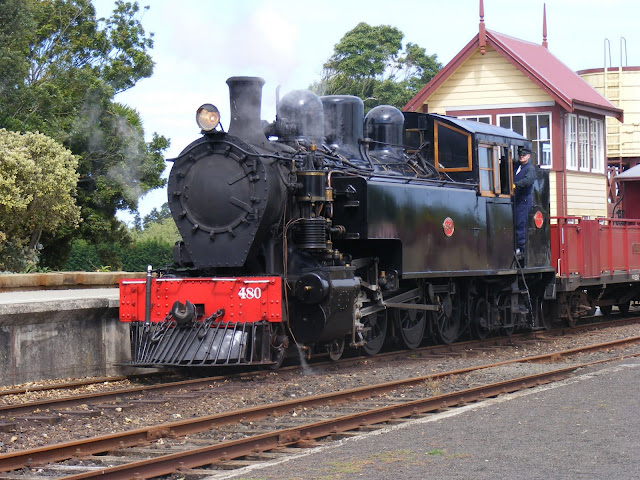 This conductor  guard could talk trains all day long! Apparently, there are plans to extend the rails. 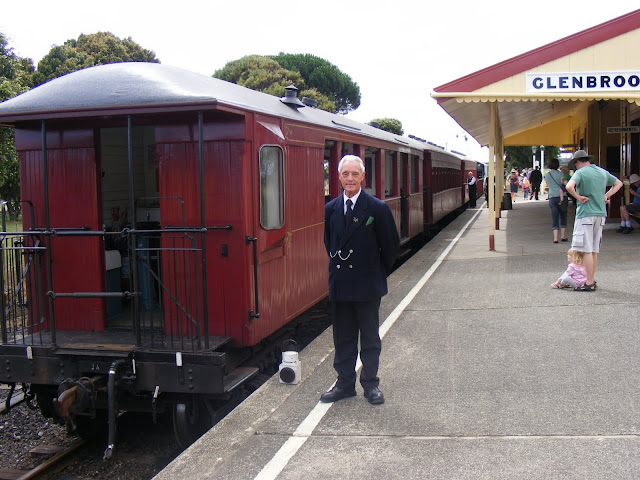 I didn't expect to find seating like this for our ride. 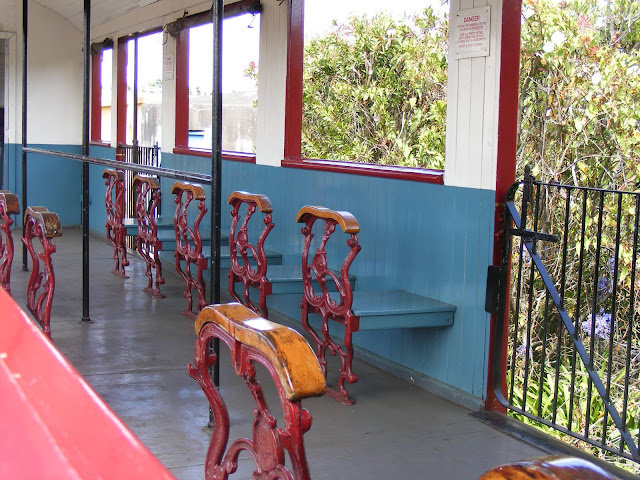 The authentic costumes were such a wonderful touch! 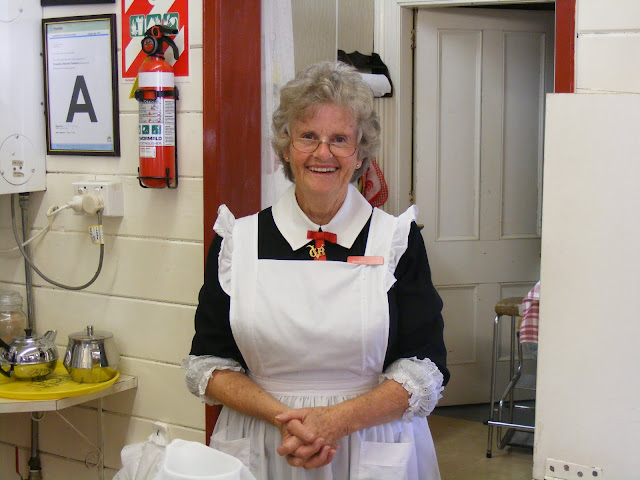 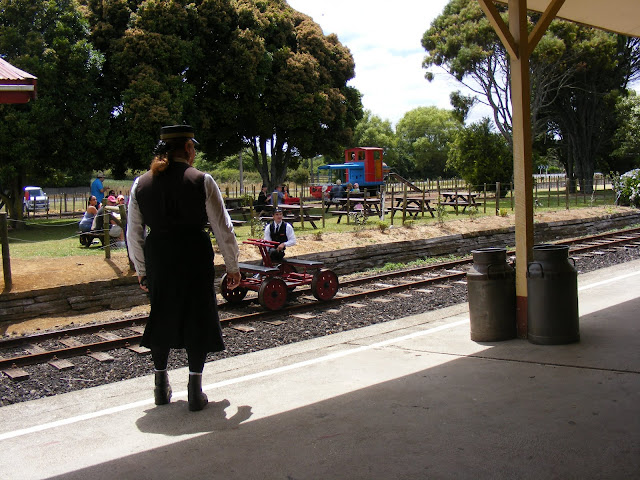 If you are in the Auckland area, be sure to stop by and have a ride!
3 comments: Links

Face it, NZ is not the biggest revenue-making venue in the world. It stands to reason that most singers and stars only think of NZ when the twinkle of their stardom begins to fade. I figure the rationale goes something like this: Well, at least I'll get a nice island holiday while I'm there.

The latest almost-NZ concert is Whitney Houston. Rumor has it that ticket sales for her concert in New Plymouth were low and they cancelled the show. The papers give the impression of 'artistic differences'. Either way, to me, it's clear that her career is going the way of those who have come before...it's the last gasp.

Before her, it was

Boz Skaggs,
the Coasters (they played Eltham a few times which is barely a wide spot in the road!)
Beach Boys
Fleetwood Mac
Glen Campbell
U2
Cliff Richard
AC/DC
Gerry and the Pacemaker
the Rolling Stones
Queen
and we can't forget Top Gear-Live!

Sometimes this little piece of Paradise has it's down side.
3 comments:

Wright's Water Gardens is just south of Auckland. We were all amazed by this place of beauty from an old quarry and had to drag Missy away from photographing the water lilies! I have no idea how many  photos we all took, but I know it was a lot. 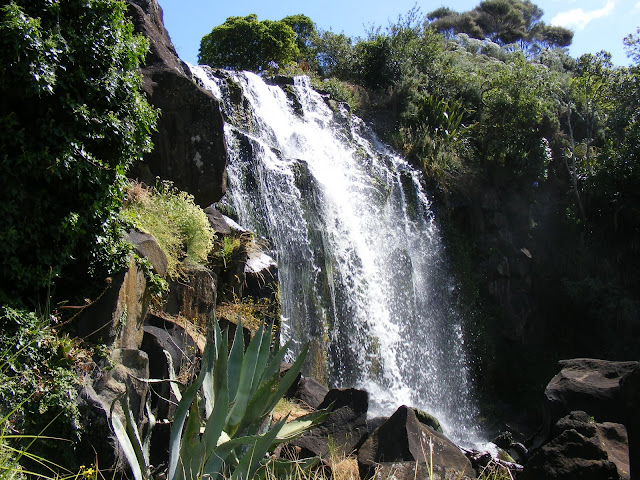 We really liked how they had build little wooden walkways out onto the water lily ponds so you could get a close-up view. 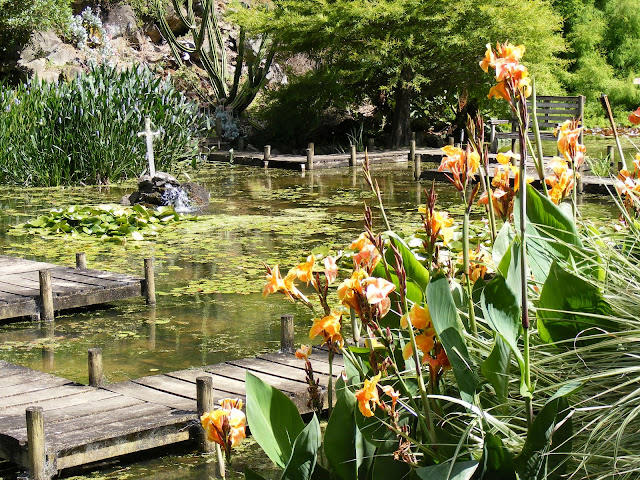 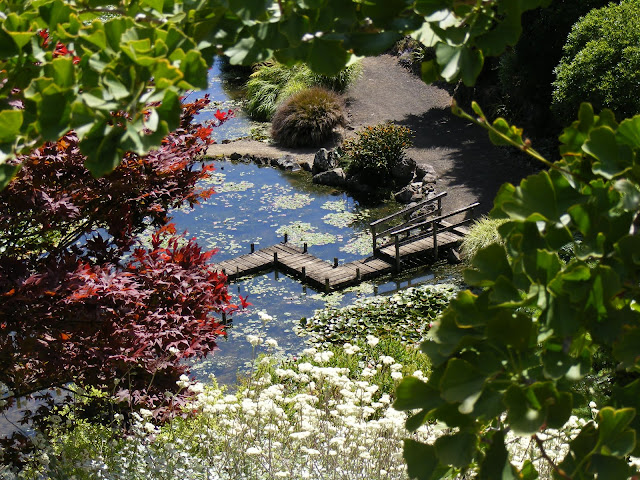 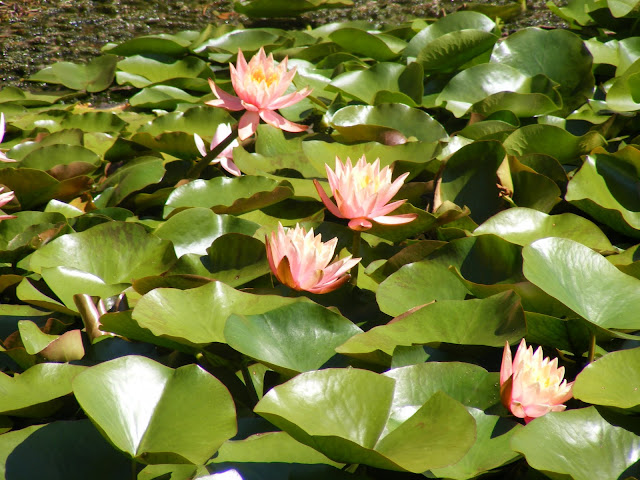 I found this little guy catching a few rays of sunshine in one of the lily ponds. 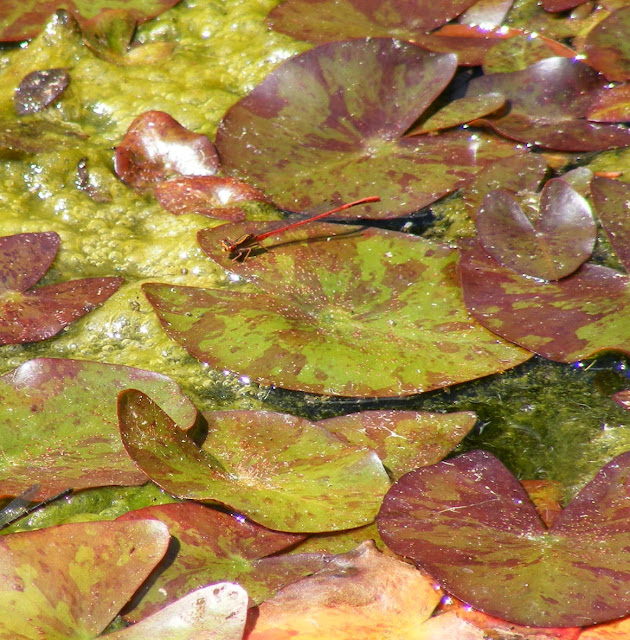 This would be the perfect place for weddings or anniversaries! 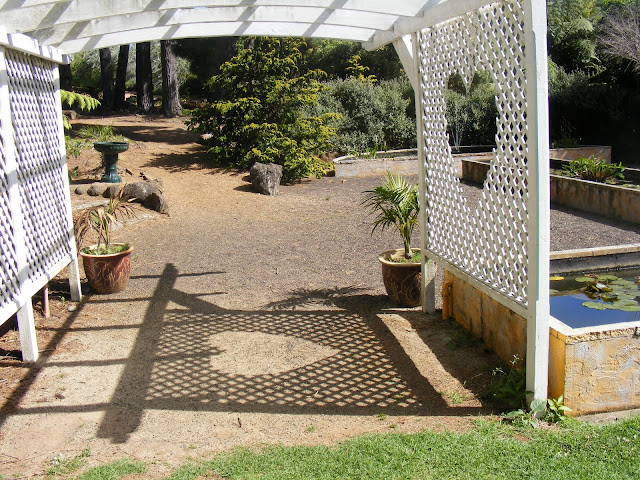 The history of this place is really cool and there is an abundance of photo opportunities for everyone--from simple lilies to a neat little temple hidden away in the brush. They had plants for sale and the lady behind the counter was really sweet!
13 comments: Links

...but, I think we get commercials ads here in NZ that would be totally unacceptable to air in the US. I don't care to promote these companies, so I will try not to actually give you the names of the products. If you want to see more, just google the phrases or initials that I have included.

1. There is an ad from Kotex for 'care down there' that has a lady actually carrying a beaver around with her everywhere she goes. She sunbathes with the beaver, she is seen sitting under a hair dryer in a salon with the beaver under the dryer next to her...It's the silliest thing to see and I find it a bit on the insulting side.

2. There are ads for a company that uses the initials s*o*g to promote hydroponics. Maybe I'm just cynical in my old age, but, come one, who really tries to grow tomatoes in their basement without any soil??? I can just see this  product sold in the back of any 'bong shop' in the seedy side of a city.

3. A pizza company that started in NZ and has spread to Australia is trying to get a foot in the door in the UK, but apparently the British are a bit more resistant than anticipated. This one is HE-double hockey sticks pizza. Since they started selling lamb shanks, their ad includes a cute lamb with wheels for back legs and a big smile on his face as his wheels squeak when he moves. There is a voice over of a maybe-3-year-old saying, 'go to h*ll'. And get lamb shanks.'

Do any of my bloggy friends see any of these ads outside NZ?

OK, I'm much better at cooking or baking things that taste good than concentrating on the healthy aspect of food. However, since we are feeling the economic pinch a bit, I decided to bake more snacks and 'extras' instead of buying them. I'm not sure if it's a better monetary deal, but I feel better knowing what the family is eating.

Here is my latest recipe that I probably swiped off the internet somewhere but forgot where. It's quick and you can personalize it with goodies that your family likes.

We had a friend of Missy's come over and feed Bubba outside while we were on holiday. We thought he'd be ok for a week since he spends a lot of time out on the prowl most days, anyway.


But, when we got home, he wasn't around for a few days. I didn't think much of it because when we had left him for a weekend he would give us a cold shoulder for a day or so, but then he came around.

After a week I started to think he wasn't coming back, although the kids were out beating the bushes looking for him. Hubby and I figured that he had found somebody that would feed him and decided to stay there. That's how he ended up 'belonging' to Hubby in the first place--he wandered in the cat flap. So we  resigned ourselves to not having a cat and made plans to look for a kitten after Hubby's parents' visit in April.

So a couple of days ago we decided to visit a neighbor from the 'old' house and catch up on things. Bubba came up in the conversation and we told the 'old' neighbor our thoughts about his disappearance. We hadn't been home 10 minutes when the neighbor called rang and said she heard a sad cat crying and came out and fed it in our old yard garden and it looked like Bubba. Sure enough, it was him!

I guess with a week of a strange dog in his house, then the move shortly after that, he might have though we had moved back to the old house. 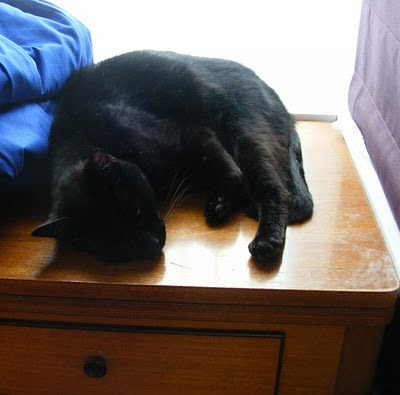 Needless to say, I believe he is happy to be home after 3 weeks on his own an losing a bit of weight in the process. And, don't tell anybody I said this or I'll deny it, I think I actually missed the bugger.
3 comments: Links

The Parrot Place in Kerikeri was a lot of fun. There were a lot of beautiful birds to see and a designated place where you could hold some of them. The people were really nice and friendly and patiently answered all our questions. 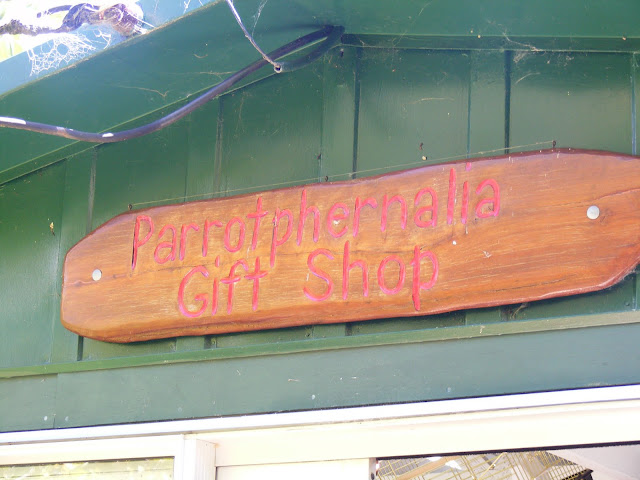 This little guy would let you know exactly where he wanted to be stroked and it felt so good, he'd close his eyes and enjoy it. 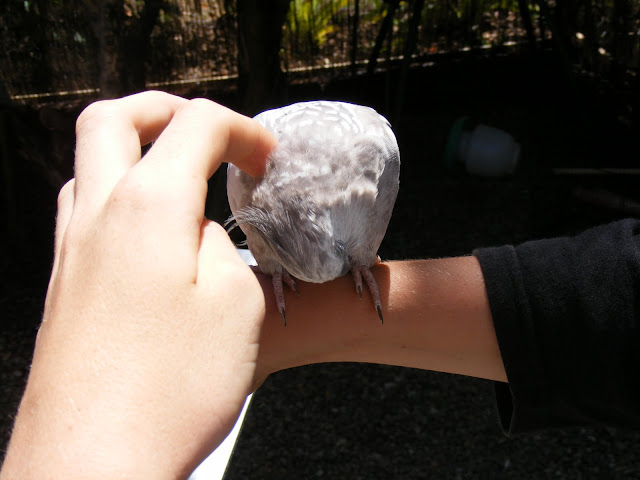 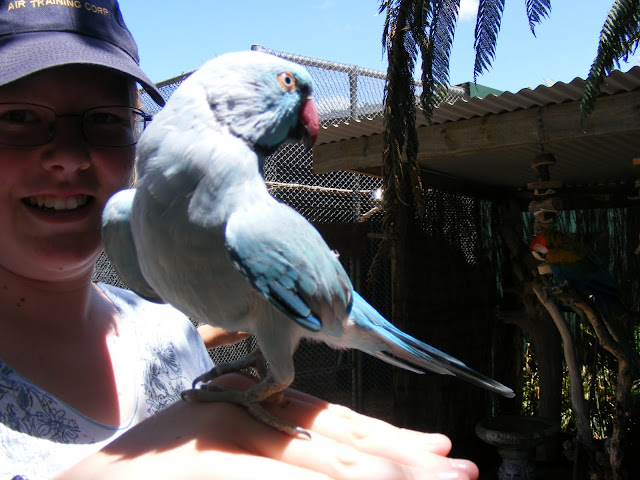 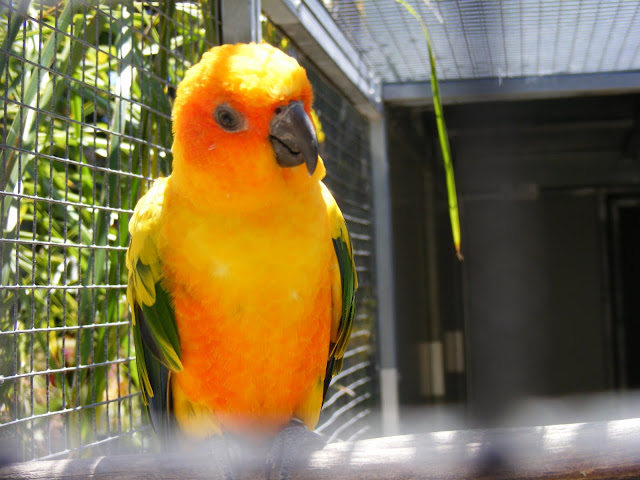 This is Elmo. He usually had a stone or piece of ice in his mouth so he wouldn't try to nip the arm holding him. 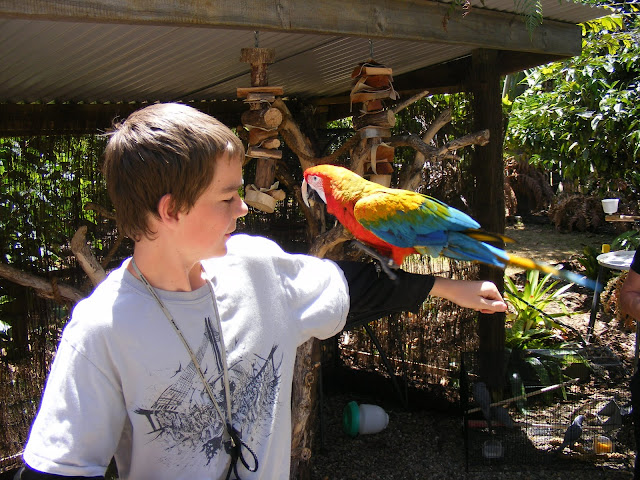 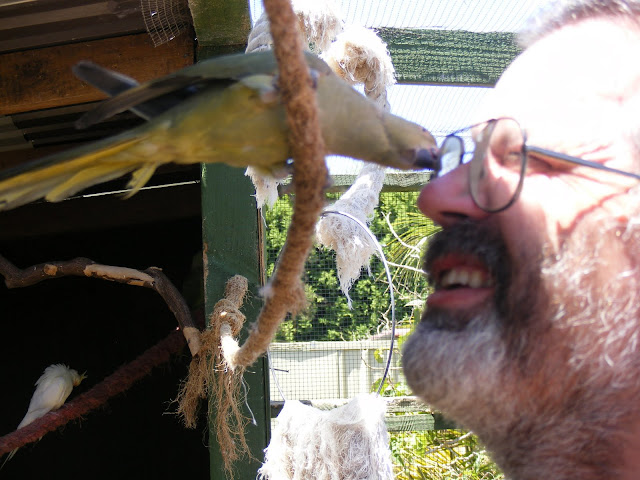