It's been about 8 months since we rescued our cats. They certainly have their own distinct personalities but are happy to be together most of the time. 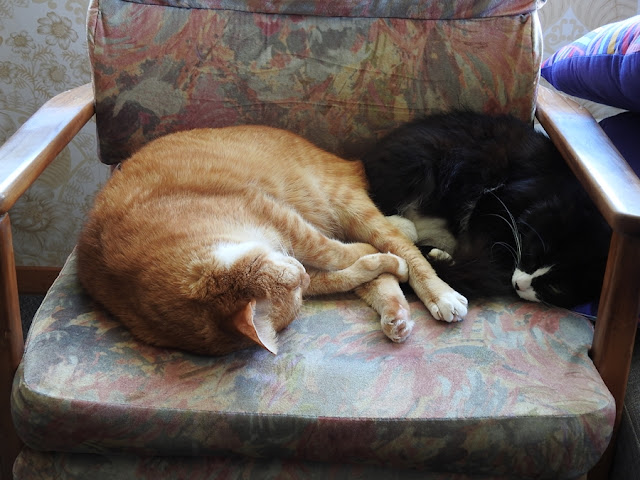 We are not sure how old Garfield is--just that he is over five years old. Sometimes, I'm sure he's a lot older than five when he takes forever to walk down the hallway. But then, when Sox walks by and he smacks her on the nose for no apparent reason, I'm not so sure.
He gives a little 'meow' lots of times during the day for no reason I can fathom so we just call him 'Mad Uncle Jack' and try to ignore it. When he sees us, he looks at our hands, from one to the other, but never in the face. And the fact that he doesn't like closed doors is weird, but other than that, he has adjusted well.
As you can see, he loves to sleep on the bed. Any time. 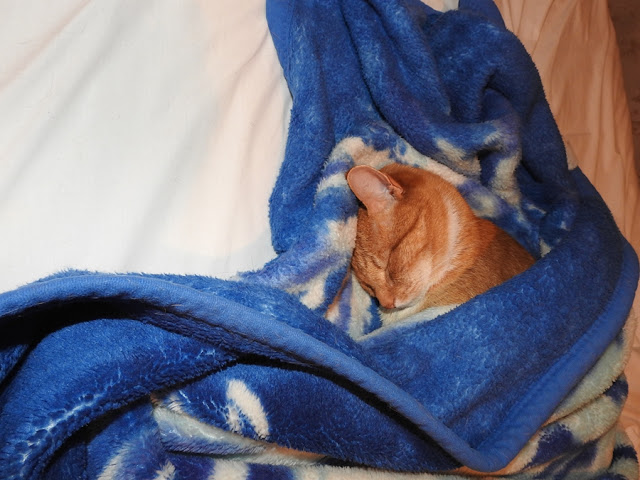 Sox, on the other hand, doesn't sleep in the bed with us. She will jump up early in the morning but not during the night. Her favorite place is in her basket. 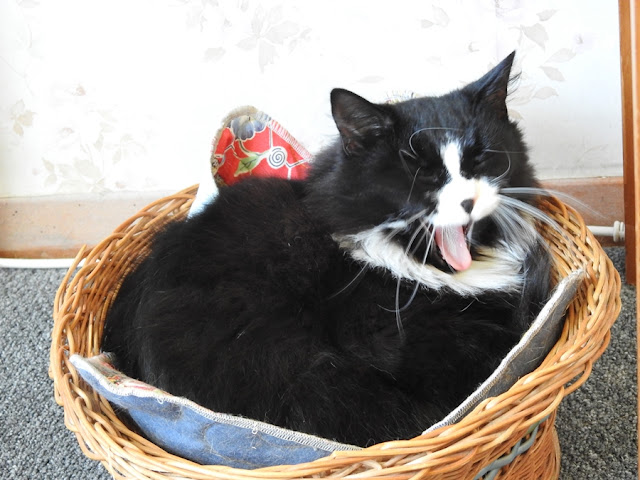 I love that she sleeps on her back sometimes but never long enough for me to get a photo of it. I also love it when I'm on the couch and she rubs up against me, curls around on herself and ends up half-upside down while I pet her. Sometimes, she just flops (I use that term loosely as she doesn't weigh much) up against me and falls asleep however she lands.
She's a great little mouser. And baby rabbit-er. And moth-er.
When she's laying next to me and I get up, she still startles me a bit when she grabs my clothes with her claws. She does the same thing when I pet her and stop before she thinks I should.
When I am standing at the sink or sitting on the toilet, she will sit facing away from me like a sentry and wait until I move. Strange cat.
All in all, they rule the house. I think that's the way it's suppose to be.

{{{giggling}}} over the rule the house....we have a 100 lb German Shepherd who allows us to live with him, LOLOL. At least, I am pretty sure that is how he sees things, just saying.

Cute Garfield and Sox. A great pair! Have a wonderful weekend!

Interesting commentary on your rescue cats. Hard to know what they may have experienced, but it is sometimes revealed in their behavior. Seems they have adjusted well.

I love the black cat with fantastic whiskers - fantastic creature

It's deffinitely the way it's supposed to be! :-) It's nice to read that they've adjusted themselves well to the family and the house. I find it also touching how you write about them. Nicely observed details with lots of love and tenderness. I've been having a "mad" dog for about three years now and I wouldn't give her away for anything in the world. Best wishes,
Annie

awww love cats, I miss my 2, one of whom is also named Socks but he's not very clever...

JoAnn ( Scene Through My Eyes) said...

Oh indeed - they do rule the house - but so wonderfully. Love the little quirks of each cat.

I can see you are very fond of your cats. I'm not a cat person.

Gorgeous cats. I love the one in the basket We have two adopted cats as well, with their own personalities.

Our Molly the Cat likes to jump on our bed in the middle of the night when she thinks we're asleep. Well, we are, but she always lands on me then bounces over to fill in the space between us. She leaves in the early morning before she thinks we wake up. But, she wakes me up as she climbs over me. Cats are delightful.

you have lovely cats! what wonderful pictures on your blog, have a great week, cheers.

Your cats are so sweet looking. We also have two cats who are our children now that our children have grown and gone away. A house without cats feels very empty to me.

I read your profile – how interesting to move to New Zealand from the Midwest – at least you speak the same language. I have traveled a lot but not to NZ. I always wished to go there because I know the climate is very good to grow roses and because there are many lambs. Here, in Georgia, there is little lamb to buy at the grocery store and it is expensive. I bought two travel books on NZ and thought we might take a trip, but then my husband became sick. The plan was to go to la Nouvelle-Calédonie too – have you been there? I think it is only 2000 km north of NZ.

These two cats are certainly lucky to have found your good and caring home.

I love cats. These sound like two fun mates to have around!

Hi! Nice story! I love your cat too. My wife and I are at Vancouver in Canada now.

How good of you take take in rescue cats! Ours are the same. Abandoded. sigh.

Allergic to cats but those sure are cute ones. thanks for the visit to my blog. I moved with my husband to Europe when I was a young Mother, and also had fun documenting the differences. New Zealand is on my bucket list. janey