For those of you that have been kind enough to ask, I am safe. Thanks for asking.

The morning quake yesterday, near Seddon, merely woke up Hubby and me. Apparently, there were several quakes during the day.

Then about 5pm I feel the couch vibrating. Then the rocking chair started rocking and the wee wind chime that I had just hung inside the window started to sway.The shaking seemed like a looooong time--I know it was probably just 40 seconds or so, but it seemed so much longer!  And then it was over.  The quake itself is reported to have only lasted for 20 seconds.

Here's a map of the major fault lines in NZ. As you can see, I am not in the path of any, but I have felt a few over the last 7 years. The quake yesterday was the second time the earth couch moved for me :) 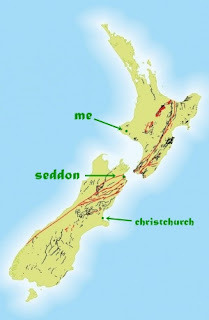 Even though Christchurch isn't sitting on top of any major faults, that's where the devastation was done in 2010. Some folks are still battling the insurance company and the government to be in a suitable house once again.

Dunedin not important enough for the map??

Glad to hear you guys are all OK up there, we didn't even feel it down here.

Both NZ and the US seem to have had more than their share of disasters in the past years. I am glad that you and yours are safe. Many states are experiencing nature's forces in the guise of wild fires and floods, two extremes. I still pray for the people in your country daily; I have since the big earthquake that devastated Christchurch.

Seems like there have been more quakes than usual. I know we are due for another big one here in Southern California. Not looking forward to it now that I am a widow and alone.

Earthquakes are scary. I live near Seattle and we had two very big ones about 10 years ago. I watched the main beam in my home shift about a foot back and forth before I realized what was happening. No damage to my home, it was just a slow, rolling kind of quake. But it was very frightening. Hoping you stay safe - it does make you understandably nervous. xoxo

Glad you're okay. We had our first one in Virginia - first one I've ever known since living there for 20 plus years - a couple of years ago. It was startling. Before that I lived in California and got several tremors there. Hope everything settles down for you now. Thanks for visiting my blog :)

So glad you're safe. There was a girl from New Zealand in hospital with me a few months back. She came to Perth from Christchurch after the quakes.

It was a real strong one yeah We felt it clearly as well. Good that it didn't cause any injuries