When I began to anticipate moving from the States to New Zealand, I don't think I ever expected the English language to be so diverse that I would be shocked at what I thought I heard.

The kids would say something was really great and I swore they were saying it was 'sweet *ss'. Considering the are still children, I was a bit concerned, at first. Come to find out, they were saying 'sweet as' which makes you wonder why they didn't finish the thought.

I blogged about a few differences before and, after almost three years here, I'm getting the hang of most of them.

Then I saw this on the grocery store shelf and it hit me--if you weren't living in NZ, you wouldn't have a clue what kind of crap what was in this bag until you got to the last line on the label. 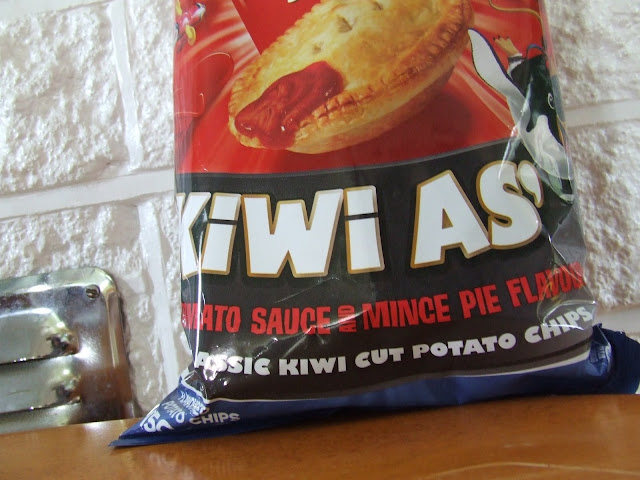 First of all, you are correct, it is simply labelled 'kiwi as'. Again, the thought doesn't seem quite finished, but that's how it is here. Bloody English influence.

Secondly, I don't understand the popularity of ketchup flavored potato chips, which is apparently another Kiwi thing. But then, I cringe at the thought of 'chicken' flavored chips, too.

(And, no, they aren't better than they sound)

Thirdly, the 'classic kiwi cut' is a rippled chip. I don't think this place possessed machinery to cut a decent thin chip or I just haven't found it. Naw, the country is too small to hide them for long, so they must not exist.

All in all, it just proves my point that labeling here is just as bad as reporting. Certainly not up to American standards. And my English Hubby knows good reporting when he read it, too, so I am forced to assume that it's just 'another Kiwi thing' that they can't blame on England.

Oh my, I'm afraid I would be floundering in a new country. :-0 And no, neither chicken or ketchup flavored chips sound very good to me... I don't really like ketchup all that much, so I'm sure I wouldn't enjoy ketchup flavored potato chips!! Ewwww.

Not being able to find your favorite foods that you enjoyed in the States would be the hardest thing for me to get used to -- heck, I can't even find some of the stuff I used to buy in Ohio, here in KS!!!

I enjoy reading your posts - had a good laugh - kiwi as' rocks! Thank you - it was interesting to learn!

Hi Hi very recognisable Sweet as
I learned british english at school so I didn't understand much of the Kiwi english when I came here. have't seen these funny bags of potatoes yet Shall look out for them

Thanks for the insight. Flight of the Conchords is the only other exposure I've had to anything having to do with New Zealand.

We have some Kiwis here at the school and we thought for sure that they were saying "ass" as well. They told us that it came from the saying "sweet as pie" and was just shortened.