Since the last post, Hubby and I have been discussing the pathetic creature we call Bubba and how he amuses us. Yes, I guess we do 'use' him for our giggles, but hay, everybody has to earn their keep.

And, he won't drink water out of a bowl, either. I do not know what's up with that. I have seen him perched on the laundry room sink licking the drips out of the water faucet. I have also caught him in the bathtub after one of us has been in there and he was licking the water pooled around the drain. But his favorite place to drink is directly out of the fish pond. Of course, he makes sure those bullying fish are not around to terrorize him first.

If he's just being too lazy to walk down the three steps to the pond, he will settle for the rainwater out of the empty flowerpot saucer.


The most unexpected time we rolled on the floor laughing at him act we have seen was when Otterboy got his black goldfish that he named Obama. [Hay, don't look at me--he thought of it all by himself! (well, with Hubby's help) But, I digress.] Anyway, Bubba discovered Obama's tank on the bookshelf and crept up to it and sat quiet as a statue just watching... 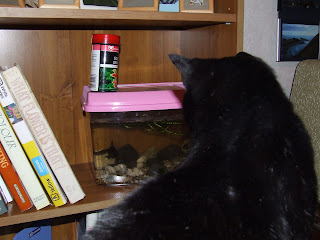 and watching, mesmerized by this new addition to his catdom. As soon as Obama darted toward him, Bubba was out the door.

I guess cats are useful, after all.

I can't believe you named your black fish Obama :) Slick little thing - can scare the cat :) You can make a whole other blog with Obama-the-fish stories - the trick is how to write about it without offending people who like the President and those who hate him - I guess - just fair reporting on the life of Obama and Bubba :)

Hi Betty, In my blog today, I talk about 'my' Bubba.... I have two silly Brown Thrasher birds that visit our feeders.. One is named Bucky and one Bubba. You'll have to check it out...

Your Bubba---the Patheticat--looks like a real character. Wonder if he'll get in that tank and gobble Obama up?????? (I wish!----NO--take that back!!! He's our President!)

Thanks for your comments, bloggy buds! One of the differences about NZ is how un-politically correct it is compared to the US. I always try to be sensitive, but I just can't corral the rest of the lot!

Lovely shots. Thanks for visiting My Muskoka!

ahhhh.. political incorrectness... the sound of it makes me swoon...