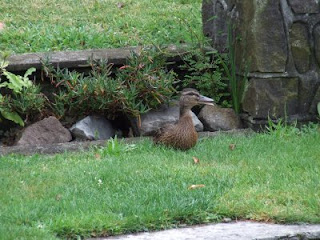 This is Dougie. He is a wild duckling.  My hubby named him.

**********
Here's Dougie's story...
All of the ducklings--all 70+ of them-- eventually quit showing up at our pond a few weeks back and we were surprised but happy about that. But, now and again,  I still can't help but wonder where they go and if they survived because the smaller broods tend to be abandoned.
Well,  a few days ago, Dougie showed up all alone.  I was actually kinda excited since we think he is the very last one brought here and he was on  'only duckling'. This time, we actually didn't mind that he was there because he can't quack.  He opens his mouth over and over and over again, but nothing comes out.
It seems that Dougie's parents followed him back, too.  They show up sporatically, and this makes him happy for a while, but they eventually leave again to do whatever it is that ducks do.
But Dougie stays.
And, although we haven't said it out loud, I guess we will let him stay... since he's all alone and just getting his adult feathers (so he needs just another month to be able to fly).  And he's so cute.  And sad. But mostly because he's so quiet.

Blogger is giving me fits about posting this comment. I hope it doesn't show up all three times! Anyway...

That is SO CUTE. And "Rubber Dougie" made me laugh out loud!

Oh how sweet as is you move to NZ. I like your story about having met on an internet forum. I did that once and the guy proved to be a nutter. Long story so it makes me feel better that it does work out. I shall come back for a visit. I have been to New Zeland a few times. It is beautiful, truly beautiful. Do you miss the United States?

I am Harriet said...

That's so cute!
Visiting from SITS!

Thanks for your kind comments, new friends!

Lilly: There are some things that I am forced to live without [see post of same title], but I don't really miss the US cuz NZ life isn't all that different.