We recently took a short holiday to Castlepoint (also called Lion Head point) in the Southeastern part of the north island.  Some of the pictures on my photo blog are from there, but I wanted to share a couple of special photos. 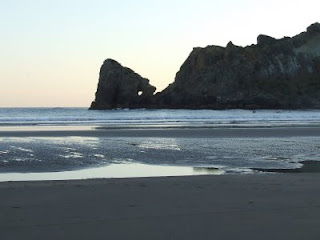 Here  is the point that the area was named after. 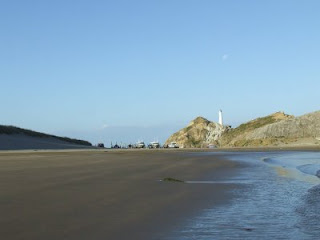 It was a great opportunity when we saw the moon over the lighthouse long before sundown. 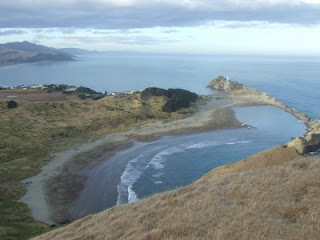 Missy climbed all the way to the top of the point (much to my panic, as I try to let her go!) and took this picture. 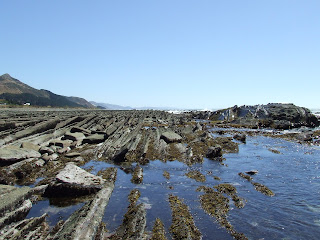 Is Castle point also known as Wairarapa? Castlepoint seems to keep a low profile. I haven't heard any news, good or bad .

My husband, a hydualic engineer would love to visit the strange lava-formed beach at Mataikoma.

Lava formed beach is most strange and fascinating. The fact that it´s on the edge of water makes it so special.

Wow Betty, those are amazing photos and an amazing place. I wonder what it is that makes usually grown men do wheelies in the sand. We have similiar beautiful beaches and always there are "wheelies". I noticed when I enlarged the second shot that there are boats in what looks like cribs between the mainland and the point, do they float when the tide comes in? Thank you so much for sharing and for stopping by my site.
Smiles

Beautiful! I would love to visit New Zealand!

Thanks for sharing with Best Posts!

Thanks for all the kind comments! It's nice to know you actually read my blog!

Ann: Castlepoint is a town in the Waitara area on the eastern coast of the north island. And a well-kept secret indeed, so spread the word!

Carolyn: I think most men turn into a shadow of themselves when they climb behind a steering wheel! And those are commercial fishing boats that are backed into the water at high tide.

You live in a beautiful area! I didn't catch how far away this is from where your home is.

I live in Nebraska, and had been longing to see an ocean, so my husband and I drove to the Outer Banks, off North Carolina. We went through Smokey Mountain National Park, and drove on the Blue Ridge Parkway to Asheville. We had to stop there, because it was foggy. It was in the afternoon, so we didn't expect it to be foggy that time of day. It was scary! Did you ever go there when you lived in the states? Reading where all you've lived brought back the memories of our vacation. We loved the ocean! You are blessed to be able to live near one!

Lovely photos, by the way!