I have a very handy hubby.  He has a strange sense of humor (if you remember how he named 'Dougie') but he is very clever in the shed (garage, for my yankee friends).
The first pictures are of Otterboy's train bed that was built in 2007, with no formal plans at all.  The bed is on top with lots of storage below, but Otterboy's room doesn't seem to stay tidy.  Go figure.  I painted a sheet to hang on the wall so it looks like the train is just coming out of a tunnel.  The white doors open and the bottom removes to become a desk. 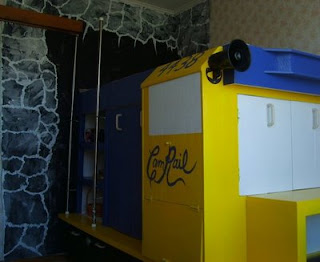 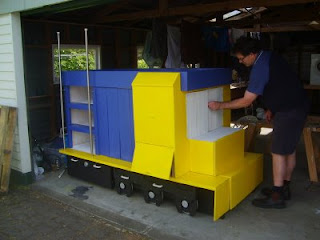 Here is a mailbox he made years ago.  It was put in a display of some sort and when a lady wanted to know how much it cost to buy, Hubby sarcastically said $300.  She bought it.  It still collects mail by the side of the road outside of Palmerston North. 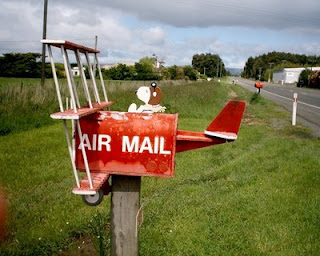 About 10 years ago, this one was built as a flowerpot display.  It just got a bit of refurbishing this spring and adorns our back patio. 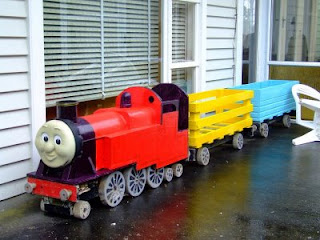 Here is the dollhouse he built for Missy a few years back.  It has very English details inside and out.  I crocheted a few curtains and we found some put-together furniture that fit great! 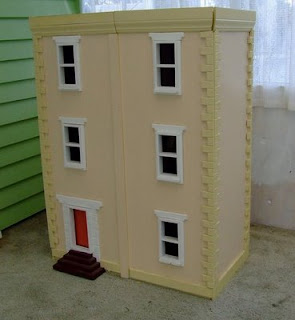 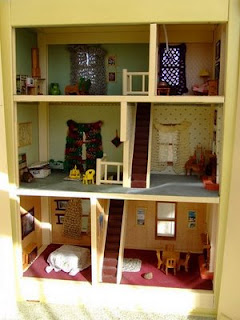 This playhouse was originally attached to a friend's back porch for her three girls.  I believe Hubby has become their very favorite visitor of all time. 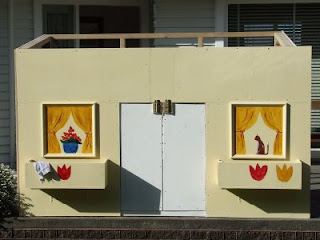 Meet 'Woody'.  He is older than dirt, but still finds time to fish in our goldfish pond. And, this is what he made for me.  In a former life, I worked in a casino and, as a supervisor, was required to look the part, so I have lots of jewelry that doesn't get worn much.  It does, however, have a nice, safe place to hang out. 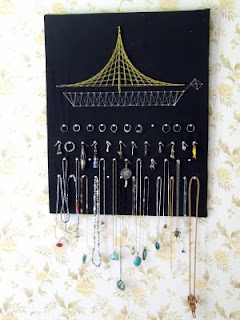 Yes, there is a theme of trains through it all.  But it makes both the boys (Otterboy and Hubby) happy, so it makes me happy.  This is a portion of the train track he put up around Otterboy's 'other' bedroom (at his mum's).  It runs all the way around the room and through the 'tunnel' that goes into the closet. 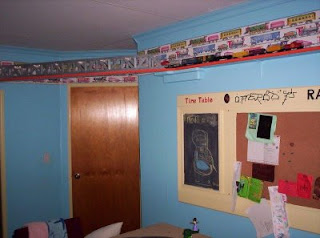 I think he's rather clever, making most of this stuff without any plans except what rattles around in his head. And all the recepients are happy with their hand-made goodies.  My hubby.  I think I'll keep him. *wink, wink*

Your hubby has become a real Kiwi Bloke. LOl
I guess you have heard that a Kiwi bloke works harder on Saturday and Sunday than all the 5 days combined. LOL, working in his shed.

I kept looking for the description for Thomas, I read and reread until I realise it was the flower pot. One of my "Special" student is train crazy. He would love to have this one. If you hubby will sell in on a concession price, in view the kid is a "Special" kid, I would love to snap it up. Special request that your hubby puts in a steam engine as well. LOL

What else does he make? Has he got a beer fridge as well?

What do you do when he is hiding in the shed?

Wow he is very talented

I LOVE the train! but the jewelery rack is sweet as! I have been trying to find something that hangs on the wall and wont bunch everything up...Im gonna have to make one eh!
thanks for the pics! :)