I guess you have all heard about the Westpac bank fiasco, where a customer was 'accidentally' credited with ten million dollars instead of ten thousand. I can't believe the girl blogged their whereabouts. But it only goes to prove my theory that there is so little crime in New Zealand simply because there is nowhere to run--the country is so small!

On the utility overcharging issues here, there is good news and bad news. The good news is that the utilities are busted at overcharging us. The bad news is that most of them are owned by the government so, I really don't know what will be done--if anything. Personally, no rate hike for the next 5 years would suit me just fine.

I might have to change my general perception of New Zealanders (in case you missed the other posts, I find them much less cordial and generally polite than Americans). I went to the grocery store yesterday, in the rain I might add, and it seemed that the Kiwis I met along the parking lot and aisles had more eye contact and smiles. And, even more importantly, two--count 'em TWO--shoppers actually move their shopping carts out of the middle of the aisles before they stopped to peruse the shelves!

I just had to show you all this photo of Missy and Otterboy sharing a bag of crisps (chips in yankspeak). Who would guess that they are siblings, 2 years apart!  And, yes, they usually get along like that--most of the time--so far, anyway.  Missy is almost 15, so we expect more 'teenage angst' in the near future, but, for now, we will take the calm that we get. 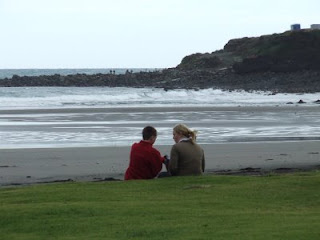 I really like the pharmaceutical system here. The government subsidizes one drug for anything that ails ya that requires a prescription. And you only pay $3 for each time you get the script filled. If there happens to be more than one for an ailment, then then government chooses one to subsidize, usually the cheapest one from what I gather. But still, it's a big pressure off the pocketbook for major illnesses.

I also find it strange that the NZ Postal Service is not owned by the government any more. It is franchised across the country. The one in our town also has a KiwiBank franchise, so you can stand in line for either of the services.

I was watching the news here in new brunswick and the story of the 10 million came on...on our local news. They showed a clip of a kiwi journalist giving the story and the accent is what caught my attention. I couldnt help but laugh...I didnt know she blogged about it though...idiot lol!

I heard about the bank fiasco earlier, but they didn't know where to find them. She just gave it right to them, huh? That should be on the dumb crooks show!

I'm glad to hear that the siblings get along nicely. Mine seem to do better the older that they get. But, isn't that always the case?

We call them crisps in Britain too!

Interesting little tidbits from your part of the world.. Whereabouts are you in NZ? North or South Island?

Hi Betty, were your children born in New Zealand? It is really sweet that they still share at all. That is a lovely pic of the two.

Wow scary to believe this was so long ago (3-4 years). I don't remember the chips though :P