It only snows once every twenty years he lied says....It just snowed a few years ago, so I can't see it snowing any time soon, he lied says....
It snowed on the 20th of May. In our yard. On our car. All over the grass. It was awful! OK, it wasn't a lot and I've certainly seen a lot more of it at one time, having lived in the Chicago area, but that's not the point. I moved here with the notion that if I never get to touch snow again in my life, I won't be upset. 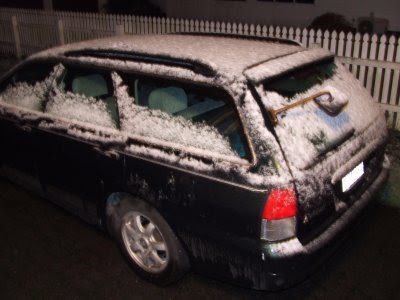 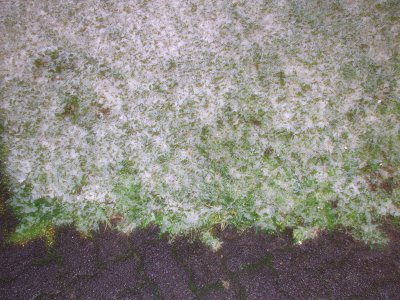 But it's suppose to snow again tonight. Hrumph.

The good news is that karma catches up with you eventually. He told me those whoppers in an effort to lure me into his den that presumably had little snow. Well, he's up on the mountain with a bunch of Scouts. Hiked up to the cabin in the rain. Might get caught in the snow. Serves him right.

I did not know that it snows in New Zealand :)))
But I hope your winter will not be too cold, I'm so happy that we have summer now!
Have a nice weekend!

You should make a snowball and throw it at him when he gets home :D Here, we are lucky if thats all we get by december...after that, we start diggin the car out!

OMG what did the temperature get too? Are you going to build a snowman for hubby's return and tell him it is his replacement? Haha

Having been in Cairo for 4+ years, my kids barely remember snow (or a good hard rain for that matter). :D

You know this week is wespec chopper donation week. You pray hard for your Karma that you don't need them. otherwise you have to write a lot home. May be you should have gone with them to brew cups of hot soup. LOL

You can just rest that the next 20 years you won't even get a dusting of the white stuff. Though you may have heard that it is coooold tomorrow.

Beloved Betty is still waiting for the snow. The only snow she saw was when she drove up the mountain to meet us. It does snow here in NZ, but mostly in the mountains and the deep south. It's very rare that it snows at the house, but we do get an awful lot of "pre-thawed" snow throughout the year. Long term plan is to move to a warmer, drier region when it's time to retire.

Oh it's just a dusting!! But seriously, along with another commentator, I would have thought that NZ was free from snow. Well you live and learn!

I always wanted to visit NZ hoping I willbe able to some day. i would have never know it snowed there