They should have paid attention!

On Saturday, we went to the 75th anniversary of the NZ Air Force at Ohakea Air Force Base.  Otterboy wanted to go with his buddy, Maniac, from ATC (Air Training Corps--like ROTC but with different letters) but couldn't go on the vans because he's not a member. So Hubby (bless his planning and very intuitive heart) got tickets online and we planned a very early and very crowded day at the air field. 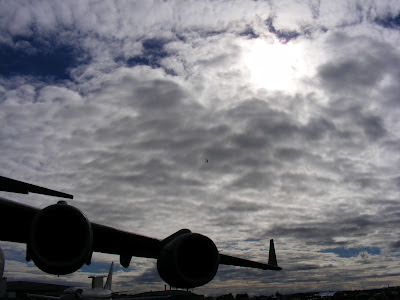 Hubby told me that, 25 years ago (on their 50th anniversary, in case you're not paying attention) the show caused the biggest traffic jam EVER and we opined about how this one would turn out.

We started out before daylight (something I don't usually do since I'm not a morning person) with a packed lunch and lots of coffee and were already in a bit of a back-up in Bulls, about 2 miles out. The traffic was already setting the tone for the day, but we still managed to get there about 9am, well before the air show started.

As it turned out, we were among the chosen few who actually got to see everything. Maniac and his group got there about a half hour before we left at 2pm and there were still cars lined up for miles coming in as we left! We also saw many abandoned vehicles along the road where the drivers had given up and walked to the base.

We had a good time but I'm sure everybody is relieved that it only happens every 25 years!


Here's a link about the whole fiasco. We are parked on the right in the 4th row!!

And you can click here to see some more photos of the air show on my photo blog.

I think I see you next to your car! :) Good thinking on getting there early. We went to a Tall Ships exhibit in Vancouver one year and it was just like that - maybe worse. We parked but then found out the lines were four hours long. Sorry, there isn't a ship made that is worth me standing in line for four hours. So, we took a little boat tour around the ships for $20 each.

NZers are not used to traffic jams! You did well to get there so early.