We found another house! This time, it's through an agent, so I don't think there will be a problem with keeping it.

I admit that I was attracted to the 'other' house because it was shiny and new (less than 20 years old), but the fact of the matter is that we're just not 'shiny and new' people. The bottom line is this: we don't really care what things cost or look like or what others think about where we live or how our home is furnished.

It's better than the 'other' house in a lot of ways:


See the red circle around the house? It's surrounded by pastures paddocks and that's a milking shed to the left but there are trees blocking it from our view. 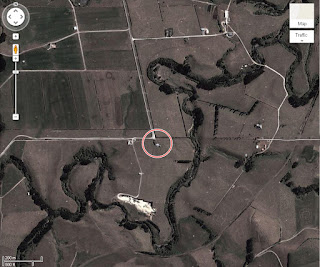 Don't worry about me being lonely when Hubby is at work. There are many photos just waiting for me to find them down these dirt roads!

We will be moving in two weeks! Yay!

Congratulations in finding a house that fits your needs; one that you will feel "at home" in.

I live in a large house. While it has its advantages, I sure don't like all the cleaning and maintenance! You make a good point about the heating, too.

Glad that it all worked out for the best! Best of luck with moving.... that's a lot of work! Looking forward to seeing your new surroundings. xo

That sounds ideal! You might be able to have a few chooks(hens/chickens)and fresh eggs!