my learning curve in gardening

The weather has blooming times jumbled at my house. This camellia--named 'Frodo the Rhodo who's really a camellia' by my LOTR fan bestie (don't ask!)--isn't suppose to bloom until October some time.

Like lots of other plants in the garden, the warm weather after a slight dip of temperature has, apparently, convinced it that it's spring already. 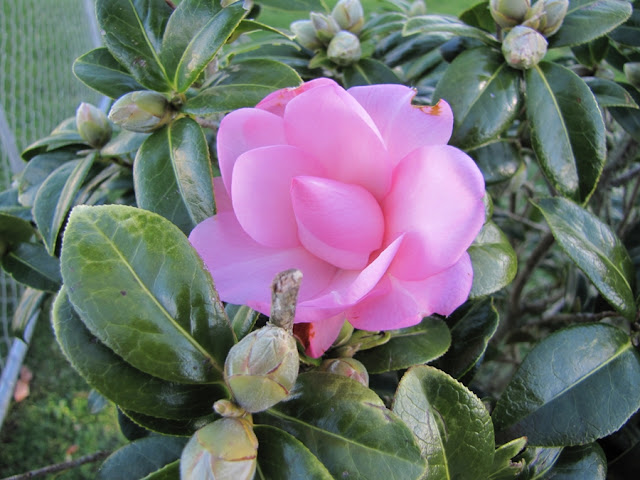 As I have mentioned before, I'm quite a literal person. So when I bought some hyacinth bulbs, I planted them according to the directions 'in autumn'. Well, the calendar said autumn, but I have since learned that bulbs can't read.

It wasn't cold enough for them to know winter was still on the way and they poked their little heads up soon after planting. *sigh* I do hope they will be willing to bloom again next spring. 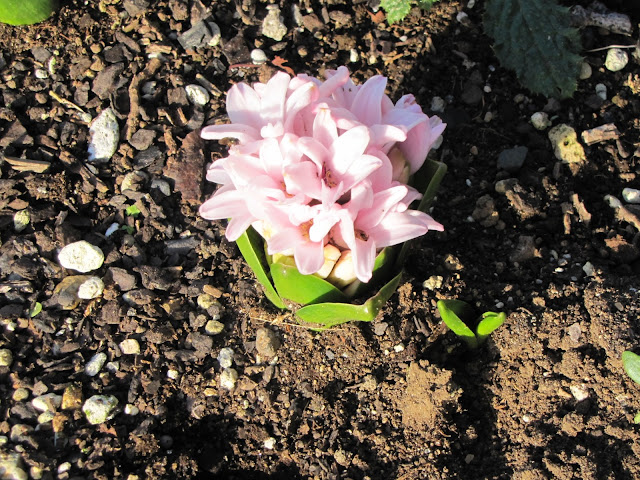 hmm the weather in your area does appear to be a bit mixed up, here in Tauranga and even in Northland last week its been typicallly Autumn.

I am not much of a gardener either. It makes perfect sense to me that this is autumn.

That is funny. I hope they come again when it really is spring.

Well, I supposed they love the sun too:)

I hope they will come up again next spring. I would think they will as they will have plenty of time to be dormant. They smell so good.

What an interesting post. I hope the do come up in the spring. I can't wait to see your butterfly garden. I enjoyed writing that post about my daddy and his Butterfly Bushes. I wish I had some photos a couple of ideas for posts came to mind when I was writing it. Thanks for coming by it was very nice meeting you.

Hi! The camellia photo is very beautiful. I hope the weather will be warm for these flowers. Thanks for sharing.

Wow, what a gentle touch of this pretty flower ! Great !
Best regards, Synnöve

How lovely...wonderful photos and writing ! Thank you for checking in on my little writing blog and following me !!!

Beautiful pictures of the Camellia and Hyacinth.
The soft colors are great.
Have a nice weekend.
Best regards, Irma

Your Frodo the Rhodo is a wonderful Camellia. May be a bit too early but that´s not a problem. The Hyacinth is somewhat different, I don´t think it´s coming again in spring. Are all bulbs coming up or is it only this one? I suppose all will turn up right.

I hope it does bloom again. I received bulbs for my birthday (in February). I'm itching to plant but I've not given in.

you are a long way from Kansas, but what a lovely place!

Hi! Your camellia photo is very beautiful. I hope the hyacinth will bloom for a long time. Thanks for sharing.

lovely flowers, hope they thrive despite the confusing weather

Maybe they will rebloom for you in spring!

Your camellia is very soft and beautiful! Lovely(*^_^*)

So lovely! I have never had a garden but I do enjoy viewing them and I think you are doing very well! :)

Beautiful pink spring flowers!
Here in Finland we have midsummer :)

These are such beautiful flowers. Wonderful photos you have shared.

The blossoms on both plants are very pretty!