I have lived in some rural places in my life. A couple of them were on dirt roads, which is understandable when there are just a few houses in the area. There was even a dirt road that was a shortcut to work (it probably had a name, but I never knew it) when I lived in Kansas, so I'm used to dirt roads.

The thing that I'm not used to--and that still makes me giggle on occasion--is the fact that the paved roads in the outlying areas sometimes just turn into dirt and gravel. I imagine the crew paving the road using up all the asphalt and just saying, 'She'll be right,' and going home.

We went down one of those today when I left the directions at the house and we were just winging it, looking around the countryside. [I do have to add that Hubby remembered most of the directions he had written down. Thank you, Hubby!]

We started and ended with a street sign naming the road we were on, but in the middle--as we went up and over a saddle (NZ word for a mountain pass)--the pavement turned to gravel and dirt. It was obviously the 'road less taken' because the sheep ran away from the car as we rode by. After we started down the other side, the asphalt reappeared like magic.

I really enjoy these rides that have no particular objective except to see the countryside around us. The hills are amazing to me and I never tire of seeing sights like this: 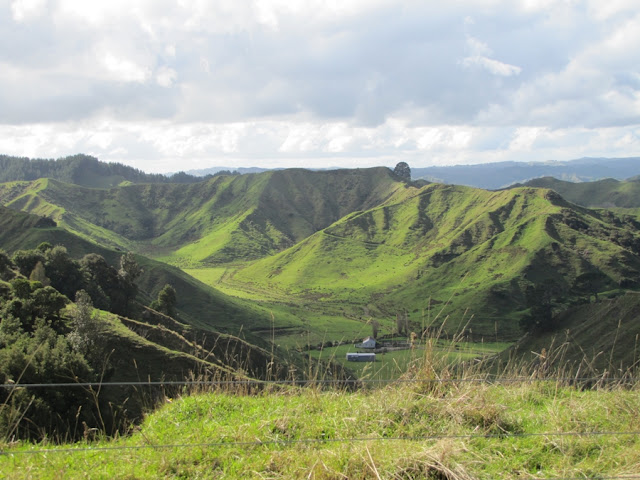 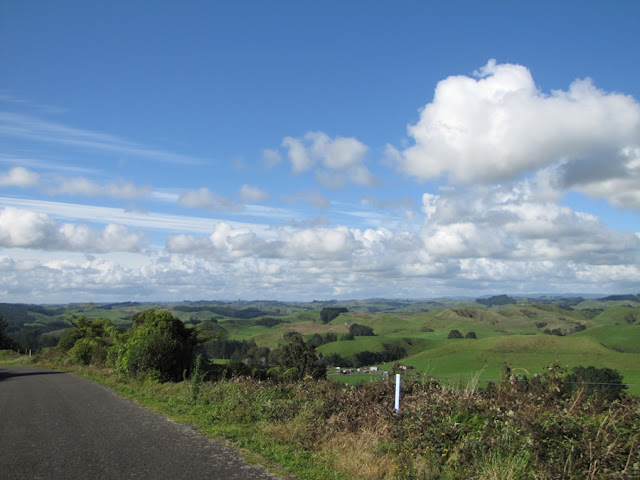 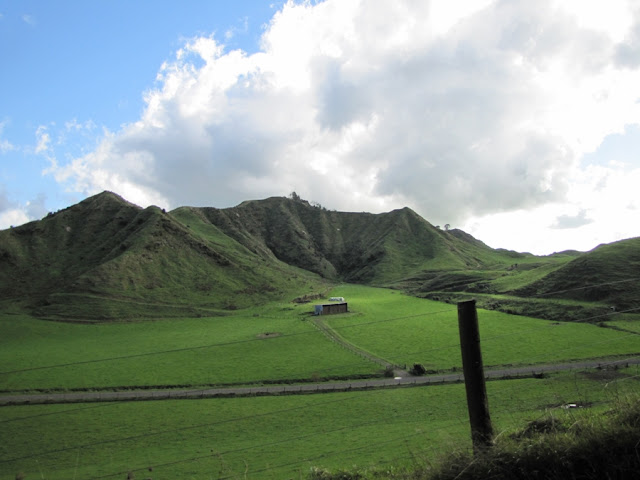 I'm definitely not in Kansas anymore

I do so enjoy are drive out into the countryside. We will be driving from Texas to Illinois in a week, and I'm looking forward to seeing the sights.

That scenery is just spectacular!!!!!

No your not! What an epic drive! So green and beautiful!

Dear Betty, Beautiful country side. Who cares about a road? This scenery is so green and lush. thanks for shearing. Groetjes,
Hetty


Very beautiful country. I can see why you enjoy so much the rides that are just to see the scenery.

Beautiful photos, and you are so on-target. Best quote from any blog this week (or maybe longer): "I imagine the crew paving the road using up all the asphalt and just saying, 'She'll be right,' and going home." That will keep me laughing for hours. I wonder if native Kiwis find it as funny as I do.

I would never tire of these beautiful green hills either! I grew up in a green mountainous area of Australia, with our farm far along many dirt roads.

NZ is a beautiful country.

What a gorgeous place!

Not Kansa, or Wisconsin. Wow! What a beautiful place! I love Dort road...but only when I know where I am going!

Evverything is so lovely and green over there. worth mozying around with nowhere in particular to go but just enjoy.

wow! such a serene and picturesque place. ^-^
i could stay with this view for hours.

Love those greenery. I can imagibe how fresh it feels there. It's an amazing huge scenery.

So much more interesting when a journey turns into a mini adventure. :)

What a panoramic vista! Great shot and delightful post ~

Happy Mid Week to you,
artmusedog and carol

That is beautiful countryside. Where I live, when a road turns to dirt it's a sign it will come to an end eventually, usually after climbing partway up a mountain.

New Zealand is a spectacular country! My best friend's daughter vacationed there this year and I was amazed by her photos.

Kansas is beautiful! Am laughing too, the first time, I realized that we live on a road like this (moved last year, and was so focused on the house we bought that I even didn't see that there were other houses in the same street, let alone the asphalt - o rather, lack of it!

Wonderful countryside. Thanks for sharing.

Love the hill country of inland Taranaki and you have captured it perfectly.

Love the countryside.New Zealand is the beautiful country.Need to visit to experience this less traveled countryside.

Love these green hills! Am glad you got out and shared your drive with us!

Such a wonderful sight! And great pictures, too. It must be a great pleasure to live in such a surrounding.
Have a nice weekend!
Annie