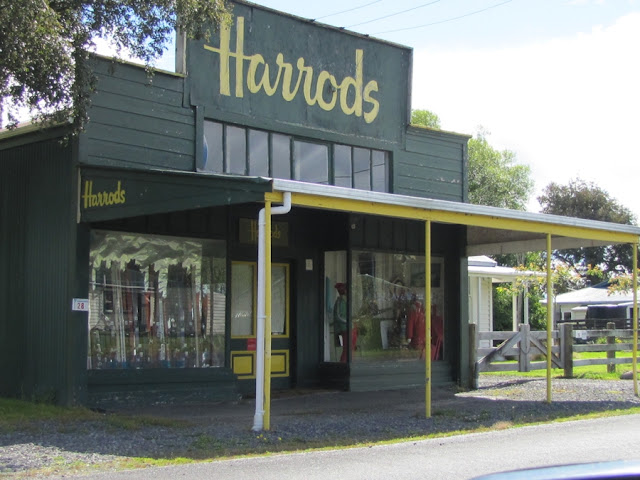 
I have been searching Harrods of Rangataua on the web just to see what comes up and saw your lovely blog.
I just thought I would let you know the History of this Harrods.
It was the general store of Rangataua from 1908-1964, During this time it had a petrol pumps, a garage, chicken coops, hairdresser as well as the general store. In 1981, 3 couples including my parents bought the building as a ski House.  A friend of theirs who came to see the new house and said that as it was the worst store in the world it should be named after the "Best Store" in the world and so we have Harrods of Rangataua.
We were not involved in the "Harrodsville" situation. Many years before this happened we had received a letters from the London store asking to remove our signs. The 6 owners were all in London as the same time and visited management , showed them photos of our quirky family holiday house and as long as we never trade as a retail store and we can keep our signs up.
We rent Harrods out to help with the maintenance and annual bills of the property but it is largely as it was in 1981 when my parents purchased it.
It was nice to see an old photo of her.
Thanks Kate

Nice to know about the other Harrods. Happy weekend!

Wow, what a difference this old shop, compared to the chique store in london! Love both your stories. Groetjes,
Hetty

Love this interesting and amusing post. Such commotion over two stores that are like night and day from each other.

Well I never knew this existed, nice to see it still there.

lol ridiculous that they sued this beautiful Harrods. The same happened on the West Coast There is a very old wooden Hotel which was called The Blackball Hilton. They were sued by Hilton and had to change their name to "Former Blackball Hilton"

Holy moly a slight difference I see. Although, I would prefer to browse through here :) X

What a wonderful building..good to read the town all stuck together. .

Where do I find contact details for this on the Internet? Botanical societies may want to rent it for a field trip.