I took the photo below ten years ago as we wandered around looking for entrances to the beach.  I thought the house was interesting, even if it is abandoned, and posted it in sepia on a NZ photography group on Facebook.
Come to find out that some of the other photographers had played there and knew the owners, so I had to look it up. 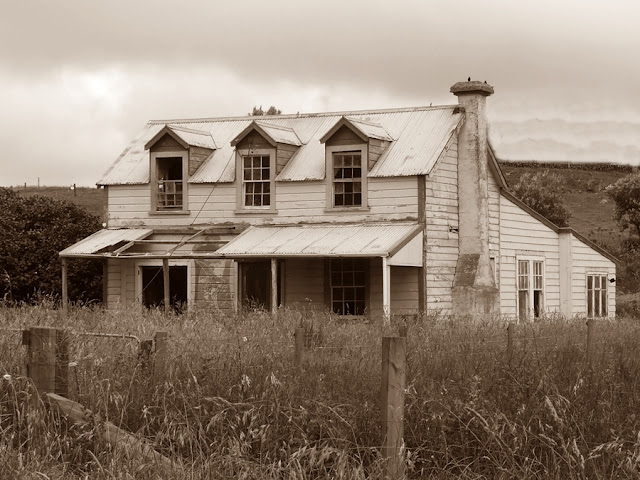 Hubby took me back today for an updated photo, below. 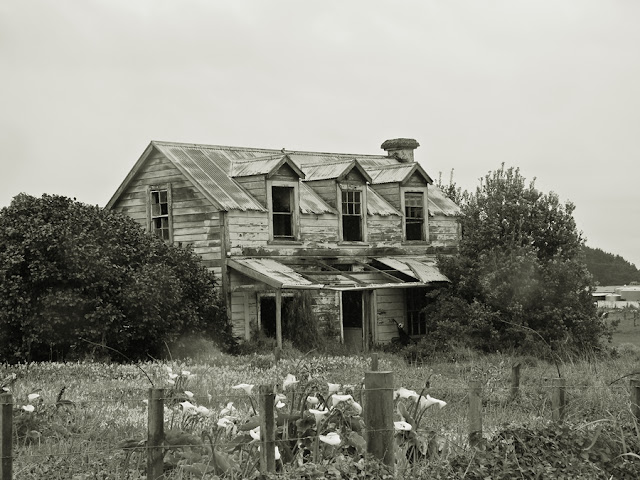 Description - Fleming House is a copy of the Rutherford House in Nelson. It features three dormer windows for the three upstairs rooms, with a plain verandah full length to the ground floor, giving the building a very distinctive early Colonial form. It is clad in rusticated boards on the front elevation with plain lapped boards elsewhere. A brick chimney reaches up the full height of the gabled roof at the south end. The house is in a poor state of repair. The suggestion of this house being a copy of the Rutherford house in Nelson could be a local myth. This is fuelled by the house design being typical of the period in which it was built. Also many differences between the houses exist like the positioning of the windows.

Architect Not known but design based on Rutherford House, Nelson.

Statement of Significance - The Fleming House is important as an intact example of a colonial-style cottage, characterised by its gable roof, verandah and the distinctive row of three matching dormer windows. Such an house is unusual in Taranaki, and although once common in New Zealand, is now increasingly rare. It would repay careful study for the information that could be retrieved about 19th century building practices and materials. The house and its owners have had a long association with farming in the district, giving the place strong historical value.

A lovely home, sad to see it thus

I do love its decayed look, but you know it must have been a beauty back in its day.

It is very photogenic but I would like to see it restored for history's sake.

sad to see its become decayed more..
hope, be restored one day ….

What a shame to see this house slowly wasting away Betty, it would be amazing to see it restored.

It looks like a lovely cosy house, glad you've posted the history on it.

Sad to see the poor state of the house. It must have been a beautiful house before being abandoned.

I researched the reason for the odd placement of the door of the white blockhouse-- why is it on the corner of the building rather on one of the walls?

A rectangular blockhouse is at a disadvantage as compared to a round or octagonal one, as the loopholes (through which muskets were fired0 only cover a limited range. To increase the range of fire, loopholes usually have "an aperture which is small on the exterior but larger for the interior. This would allow the defender to train the musket across a wide arc, as well as providing for elevation and declination." (ref)

My theory is that the door is particularly vulnerable and that the same principle applies, except that by placing the door on the corner (with the same tapering of the walls on either side of the door) provides much greater line of sight than if the door were on the flat side of the rectangle.

Reference: marker hunter on wordpress "The visual you should have in mind is that of an aperture which is small on the exterior but larger for the interior. This would allow the defender to train the musket across a wide arc, as well as providing for elevation and declination".

That's my homestead spent my childhood there it was wonderful