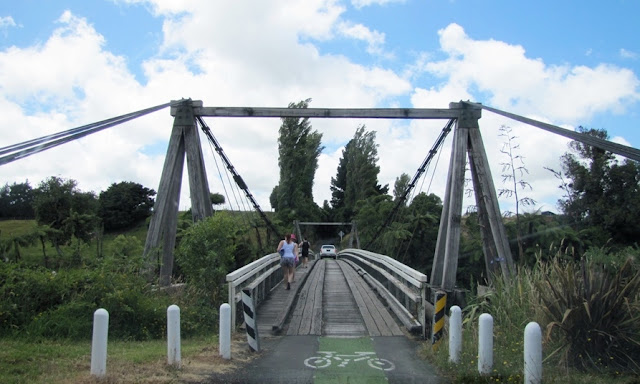 The bridge, which was first built in 1897 and then rebuilt in 1927, was closed to vehicles from 1985 to 2006 although remained open for foot traffic and recreational users.
After more than $600,000 was raised by the trust and other donors, it was repaired and reopened. The scheme included a buy-a-plank initiative, where a donation saw the donor's name engraved on the bridge.https://www.stuff.co.nz/taranaki-daily-news/news/92829223/truck-blamed-for-damage-to-historic-wooden-suspension-bridge-in-taranaki 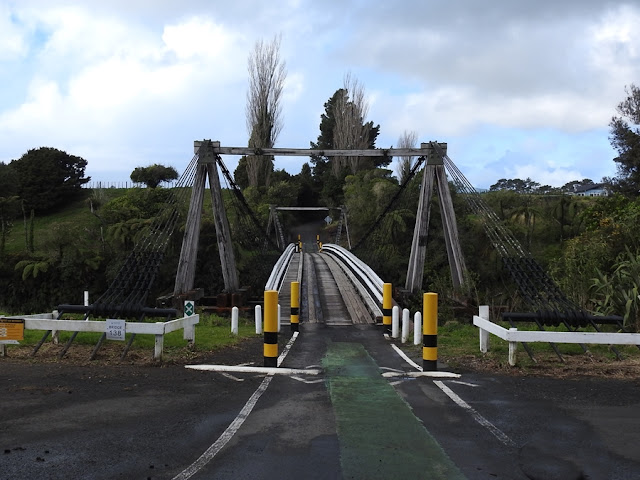 Sadly, the entrance to the bridge looks like this now.  A truck driver that shouldn't have been on the bridge did a lot of damage and ruined it for all of us. In exchange for not publishing the truck's company, the company paid $60,000 for all the repairs.

At Home In New Zealand said...

There always seem to be somebody around to do something stupid. What a shame. I hope the bridge gets repaired okay and will soon be back in use again.

What a shame some well had to spoil it for everyone else. Love those old suspension bridges.

What a beautiful old bridge - so glad to see that it has been restored, and then repaired after the damage was done to it!
Blessings
Maxine

At least they fessed up and paid for the repairs to this interesting structure.

How frustrating for the local community. We have a saying with a sigh: "There's always one ..."