A kid, a cake and fake poo

Otterboy, who is 13, has a weekly project for school. This week it was to find a recipe, bake a cake and bring some into the classroom, if you could.

Now, I must say that Otterboy and Missy are both fine cooks and bakers. And with Hubby being the world's best source for 'creative' ideas, it wasn't long before the discussion of this week's project ended up being about a "Kitty Litter Cake" that Hubby had come across a while back.

We didn't even bother to find the recipe on the internet before Otterboy was creating his very own version.  He decided on a carrot cake base and we put a streusel topping on it after it was baked, hoping it would give the cake a 'real' look.

Of course, the most talked about part was the fake poo. It was discussed in decadent detail, as I'm sure you can imagine *shudder* That ended up being made out of fudge, using the recipe I posted.

The glorious result is below. 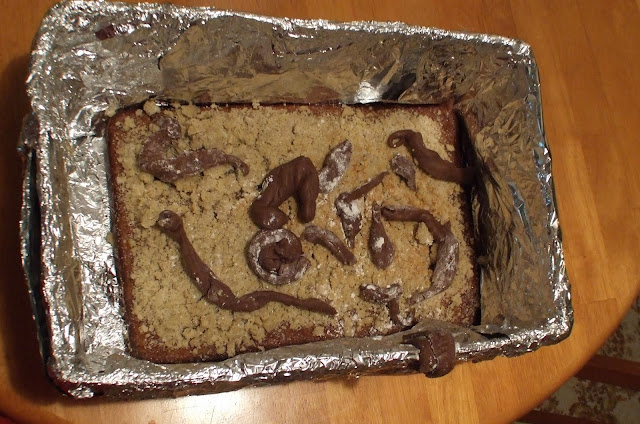 We love it when a plan comes together!

Wow - that looks like the real thing! I bet it was delicious!

i am sure it tasted yummy!

LOL! I bet the girls in his class didn't want anything to do with it!

I don't think I could even eat that :)
It looks a little TOO real.

This made me cringe and laugh at the same time, having two cats myself. I'd love to bring out this cake to my gourmand friends at a dinner party. hilarious, and very creative!