No, that's not his name, but it should be! 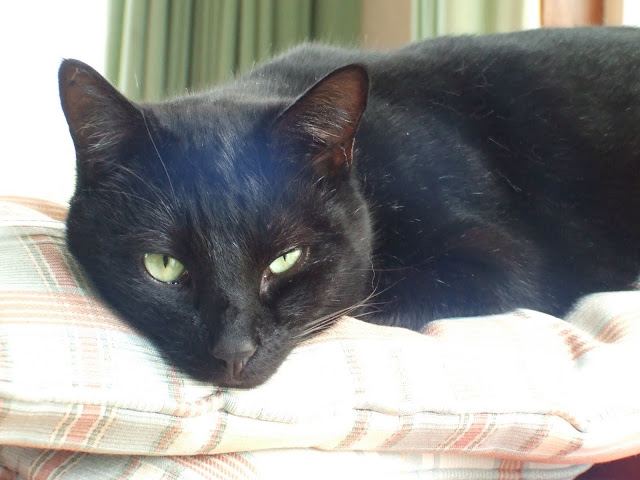 This is Bubba (don't ask!) and he freaks me out quite frequently. Our 'front' door (which is in the kitchen) is made of panes of frosted glass, but it's in an alcove, of sorts, so it's weirdly shadowy most of the time. And at night, you can't see much at all. This is the door of choice for Bubba.

When he wants in, sometimes he just sits and meows until someone lets him in. But other times...whoa, that's when it gets spooky. And it only happens to me. I can be walking past the door into the laundry room and think psychicly feel sometimes I just 'know' that he is sitting outside, waiting to get in. But he doesn't make a sound. And I look really hard, but I can't even get a glimpse of an outline of him. He is just there. And I just know he is.

Hubby told me that there are undocumented explanations of this...this, whatever it is. Apparently, there are those out there that believe that cats emit ultra-high frequency sounds that humans cannot hear, but rather, they 'feel'. And, apparently, this sound is only felt by the ones that they want to open the door. Personally, I find that very plausible!

Hmmm....have I mentioned lately that I'm really a dog person?

Definitely looks like he'd be at home on the back of a broomstick! How eerily fascinating. Well the Egyptians certainly thought there was something extra special about cats. Looks like you are super in tune with yours!

Well, I'm a cat person...and Bubba is darling...not spooky. LOLOLOL Just look at that face! Love the photo share. And the story, tho eerie it is.

We've got two cats now So that's a lot of running to the doors.You've got a nice one

Amazing - and a little spooky. He is a beautiful looking cat!

Your Bubba (Spooky) has gorgeous eyes, but they are a little spooky... Maybe he'll answer your door when all of the little ghosts and goblins visit you on Halloween... OR--do they do that down there???????

I was wondering the same thing as Betsy -- if you do "celebrate" with trick-or-treating, he would look great in your window at Halloween.

It's a lovely portrait in any case.

Thanks for the comments on our patheticat!

To answer your question about Halloween, it's not a really big holiday here. Apparently, it is gaining popularity as time goes by and there are some places that have parties on the night, but it's not nearly as big a day as in the US.

Sweet, sweet kitty photo. We had a cat much like yours, and she truly was an old soul, able to communicate on so many levels. Hope you appreciate the special connection you have.

LOVE this! Gorgeous cat.
My Anabel had a very psychic thing going with me and also with my sister!

And there have been two other cats in my life that did, out of tons of cats I've known that belong(ed) to family and friends.

I don't understand it, part of me doesn't even believe in it, and yet it happens and it's amazing and just one of the many wonders of our world :)