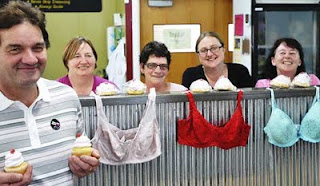 The window display at Yarrows' shop in Manaia looks more like a lingerie shop than a bakery.

It's Breast Cancer Action month and staff at the shop are hooking people in with their collection of bras, and it's growing by the day.

Three bras hanging in the window for the Think Pink display was how it all started at the beginning of the week but workers and customers alike seem to be flinging their feminine smalls at the shop.

"We even had one gentleman bring in his wife's bra. She had died of breast cancer," worker Shirley Smith said.

The number stands at 20 and the ladies are hoping to collect about 100.

They've decided that any not claimed back will be shipped to Samoa in a show of support for the tsunami victims.

And because so many have been donated by staff members the women might use them for a "guess whose" competition.

Even the lone male in the shop, Stuart Arbuckle, has been asked for his but it has not been forthcoming as yet, Shirley says, laughing.

They reckoned they even had a couple large enough to hold a cobb (large) loaf.

While they are having a laugh, breast cancer is an issue that has affected every one of the workers in some way.

Kaye Bird is one of the survivors working at the shop.

"We all know someone who it has affected," Shirley added.

The brassiere collection has got everyone talking about the issue, which is what the staff wanted.

And it's not all about bras – there's pink icing galore and there are even biscuits (cookies) topped with marshmallow icing and a jaffa (orange and chocolate candy).

"You can use your imagination to work out what they are," said Michelle.

Money raised goes straight into the collection bucket, which is filling up nicely, Shirley says.

Always good when you can support a good cause, and have fun while you're doing so!

What a great cause to support. :) I need to write a post about this before the end of the month. good luck with teh fund raiser. :)

That is a great cause to support.
Even before I read your post, i notice how LARGE the bras were, and the two cupcakes in Stuart's hands *grin*

A fun way to support a good cause.

Neat post, Betty... We all need to do whatever we can to help those with breast cancer. My good friend has it--and it has spread to her bones. I'm so worried about her.
Hugs,
Betsy

What a fun way to supoort breast cancer research!