Now, I just have to figure out where it all goes!

And, as anyone who has ever moved in their life has said, I didn't know we had so much stuff!

Our first move was just after I got here when I only had three suitcases of stuff and Hubby just had 3 tiny rooms of bachelor stuff. I must say that three years changes all that!

Patheticat, AKA Bubba, did not like the move at all. We got him to the new place and he promptly spent 24 hours under our bed. Then when he did--neurotically--venture out, he spent another 24 hours gone. I don't know if he was punishing us for changing things or was just too afraid of the neighbor's chihuahua to get back home. The good news is, he is pretty much accustomed to the new surroundings and I am thrilled with everything in the house.

The keys in the picture below are from our old house and our new house [before we asked to have the locks upgraded]. Now, I can't remember the last time I saw any keys like these in use in the States. If you have used a 'skeleton key' lately, I'd be pleased to hear from you in a comment.

In discussing this with Hubby, who knows a LOT of stuff about NZ, I found that the districts were allotted 12 different keys for houses way back when. It seems that if you knew what you were doing, you could make a master key by filing one just right. Now, if that doesn't make you feel a bit insecure, I don't know what does! 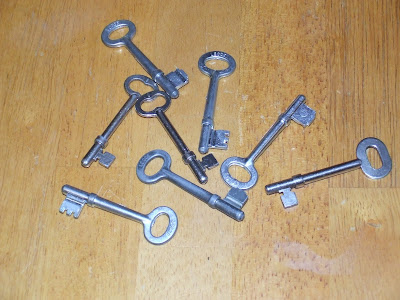 I know just what you mean about us humans collecting a lot of 'stuff' over the years.

Glad to hear you're all moved...it takes forever to get 'settled' tho.

Oh yes, we have skeleton keys, we live in a very old house/apartment (our landlady lives in the apartment above us). I have enjoyed reading about your adventures. smiles