It's all his fault

Anybody who takes as many drive-by pictures as I do knows that photos don't all come out great. Some are fuzzy, some have the car hood bonnet as the biggest thing in the photo, some have sun spots, some have a quarter of the photo with your camera's reflection in the rear-view mirror. There are also trees, huge rocks and  bushes that end up the focal point of what could be a great shot.

But, I'm sure we all know, the biggest problem that occurs when you are getting close to civilization is poles. Light poles, telephone poles, doesn't matter. They all seem to jump in front of my lens as I pass by.

Well, I have found the reason they ruin most of my out-the-window photos and it's this truck driver's fault!  As if there aren't enough poles to mess up my photos (like the one in the middle of the shot below),  he's taking more to be put by the side of the roads! I tried to get Hubby to catch up so I could yell at him, but, in all his great wisdom, Hubby declined.

I guess I will have to actually stop the car and get out for photos. Eventually. But, until then, I'm grateful for digital shots so I can delete them without anybody knowing how embarrassed I feel. 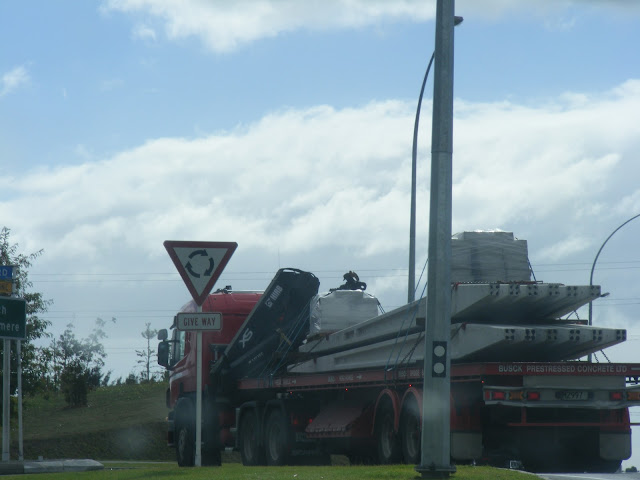 Ha,ha! I understand your frustration, but that truck is actually pretty interesting.

I love him and his super dooper truck. Tell me where to find him, I will try to hitch a ride.

Once I was in a similar situation, only I was driving the car in a traffic jam. A model T type of car passed us on the left, and I requested the hubby to take the photo. After much um hum, he finally took it. It didn't turn out very good and I haven't used it yet.

My problem with car photos is I am usually the one driving, because I love to drive, and my husband doesn't like to take photos from a moving car! I do better to hand the camera to the kids! :D That is an awesome truck - even if it's evil and foiling your photography plans.