South Taranaki, the armpit of the universe

An article on the front page of the South Taranaki Star, Thursday, September 30, 2010 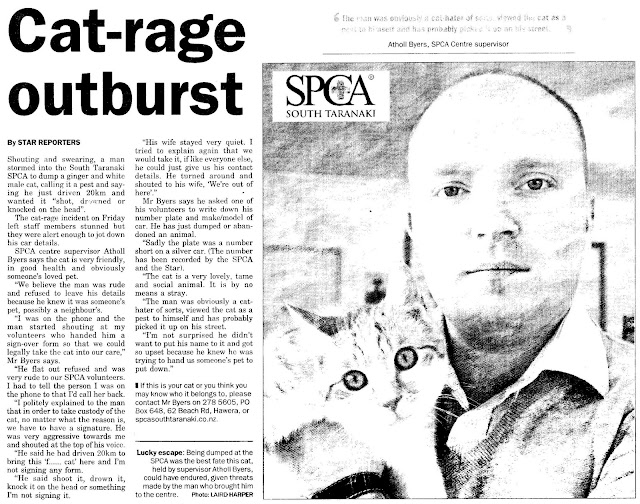 I couldn't find this story online, so I scanned the article for some semblance of credibility. I'll rewrite it exactly how it is written so you don't have to squint to read it.

Shouting and swearing, a man stormed into the South Taranaki SPCA to dump a ginger and white male cat, calling it a pest and saying he just driven 20km and wanted it "shot, drowned or knocked on the head".

The cat-rage incident on Friday left staff members stunned but they were alert enough to jot down his car details.

"We believe the man was rude and refused to leave his details because he knew it was someone's pet, possibly a neighbour's.

"I was on the phone and the man started shouting at my volunteers who handed him a sign-over form so that we could legally take the cat into our care," Mr. Byers says.


"He flat out refused and was very rude to our SPCA volunteers.  I had to tell the person I was on the phont to that I'd call her back.

"I politely explained to the man that in order to take custody of the cat, no matter what the reason is, we have to have a signature.  He was very aggressive towards me and shouted at the top of his voice.

"He said shoot it, drown it, knock it on the head or something I'm not signing it.

"His wife stayed very quiet, I tried to explain again that we would take it, if like everyone else, he could just give us his contact details.  He turned around and shouted to his wife, 'We're out of here'."

Mr. Byers says he asked one of his volunteers to write down his number plate and make/model of car.  He has just dumped or abandoned an animal.

"Sadly the plate was a number short on the silver car.  (The number has been recorded by the SPCA and the Star).

"The cat is a very lovely tame and social animal.  It is by no means a stray.

"The man was obviously a cat-hater of sorts, viewed the cat as a pest to himself and has probably picked it up on his street.

"I'm not surprised he didn't want to put his name to it and got so upset because he new he was trying to hand us someone's pet to put down."

I did find it online here

Wow! Extraordinary! Sounds like something your neighbour might do. I hope they find the cat's owner. Will you give us an update if there's anymore news on it?

Ohhh that's so sad! Why do I have a feeling there will be a long line of people looking to help that poor cat out?

And Then Kate said...

Hmm. Perhaps HE should be shot or drowned or at the very least knocked on the head. In public.

what a grot, I hope he is castrated (man not cat!)