I am a very literal person. If you can't show me proof, then don't expect me to accept your theory of time as fact. I don't care who you are. You weren't there. You don't know for certain.

(And don't get on the 'carbon (or whatever the newest type is called) dating' bandwagon either, because an archeological student showed me facts that their first dating were completely wrong. So, if they weren't sure about the first 'sure' dating, how can they be sure they got it right? Or wrong, for that matter. I hope you can see my anal-retentive dilemma.)

At our house, when we see a pompous one on tv spouting 'facts' that happened before recorded history, we all roll our eyes and say 'So they say....' in unison.

That's why I am so glad Hubby took us to Waimangu.  It's my kind of history--recorded with a definite date for all to see. A volcano exploded over the area and all the growth is since 1886. Sadly, the lava and ash covered what was considered 'the 8th wonder of the world'..the pink and white terraces. You can read about it here, it's a kid's version, so it's not bogged down with information. 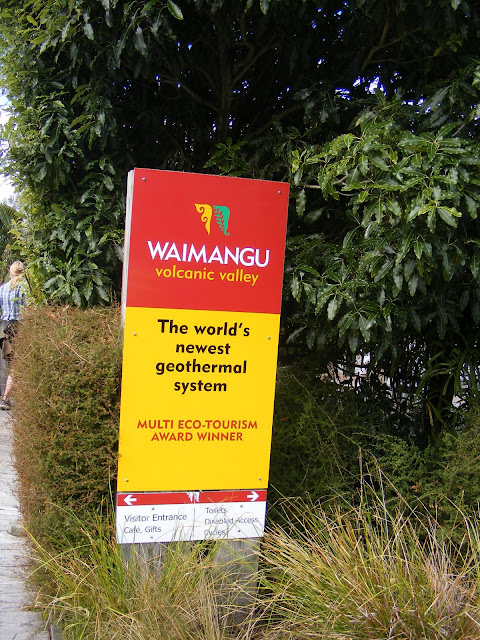 We took a bus down to lake Rotomahana (Black Lake) where the bus driver got out and went with us to the boat dock. He then proceeded to captain the boat and narrate the tour! (As we were leaving, I heard another tourist mention '...a three hour tour...') 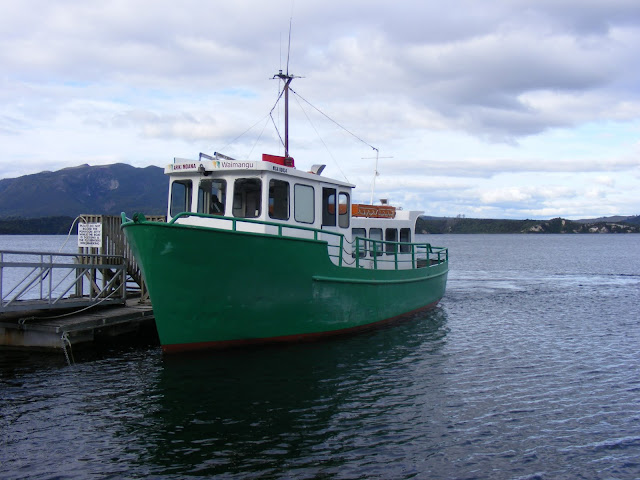 The yellow color is not from sulfur, as most people think. We were told that it is an algae that grows on and around the steaming geyser holes that pop up here and there. 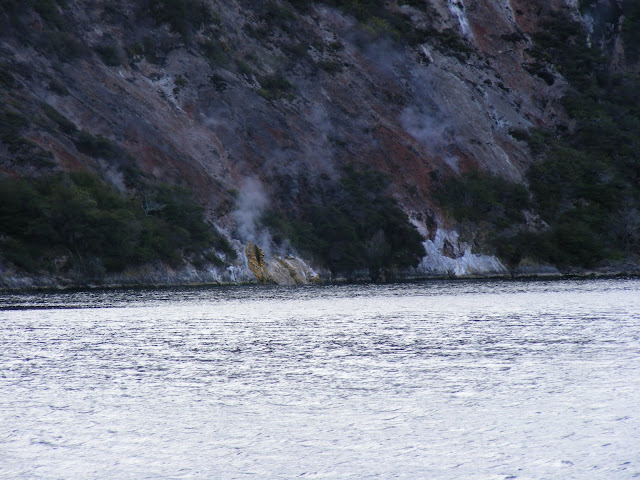 The white is silica. 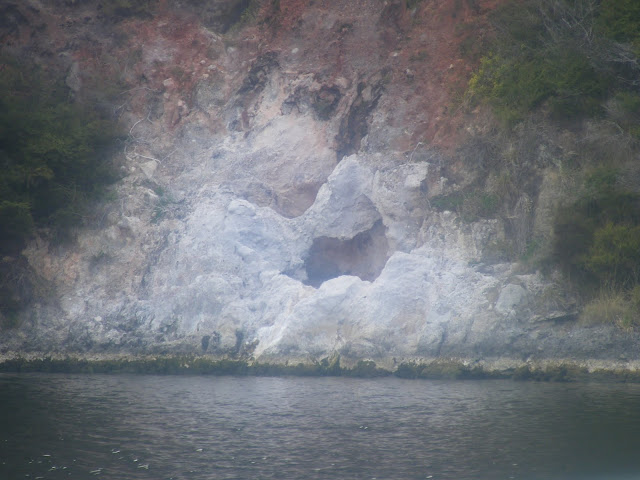 Our holiday was in the Rotorua area and there is a lot of geo-thermal activity there. Of course, I took lots of photos, so there will be more in later posts.

What a very hand guide to have around! The white silica captured my eye the longest -- amazing!

I am totally with you Once they were convinced that the earth was flat. So you can't take things on face value
Love the photo's Next summer we are going for the first time to the North Island and roterua is certainly on the list

Did you have a soak in the smelly water which my sister is convinced is good for her.

Thanks for the interesting tour! I will go to the link as well; those guides written for children can be very helpful to those of us long past that age. Just enough basic information about something new!

I always wonder at how arrogant we really think we are. Intellectuals of all kinds have thought all sorts of wacky things in history...how do we think it's only what WE think that isn't wacky?

Aha, proof needed. A woman after my own heart. recently I've been thinking of doing a post that combines the ideas of E-Prime and Weasel Words.

Fascinating photos! Looks like a great visit. Do you use the geo-thermal energy for power, heating, electricity and stuff like that? (It's big over here in Sweden.)

Thanks for all your kind comments. It really is awesome for me to see these things for myself.

Ann: Yes, we did go for a soak in the pools.
Marja: We will be glad to tell you the 'good' places to go when you visit!
Lady Fi: Yes, Rotorua does harness the energy for heat and electricity. I'm not sure about other places in NZ.

The Rotorua region is one of my favourite areas. We live not too far away, in Tauranga, and visit there often. So much history and natural sights to enjoy.

Wow! An alien landscape! I too, do not like opinions as facts. Drives me bonkers.

Beautiful blog and photos, have a nice day Radka.

Thanks for the tour. Fine photos especially that last one, it's a lovely abstraction. Thanks for dropping by and commenting on my photos.