The bees find a new home

A couple of posts back I showed you a hive of bees hanging off my rhododendron.  Personally, I was a bit worried about them because people would be passing close by. So, I called the council and such folks to see what our options were. It seems we'd have to pay someone to get rid of them if they didn't leave on their own, which would be a shame since bees in NZ are scarce.

Then my really smart Hubby said he was going to call the local apiary and see if they wanted them (and that's why I keep him around). The apiary said people were lining up queuing for hives and gave him a few names and numbers. He called some and the first one to answer said he would be here that evening to get them.

We were excited that we would be able to watch him in action, removing this dangerous  horde of wild bees!

Well, so much for the excitement. He just lowered the branch until the hive was in his basket, snipped off the branch and covered it with a sheet. 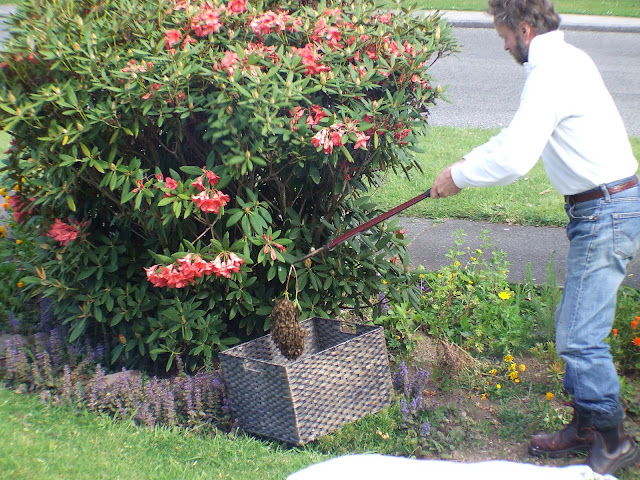 It was a bit of a let down that there wasn't more to it, but I'm glad they found a nice home where they can work for their room and board.

Still, pretty cool I would be scared to death to that. He is obviously easy around them. Great thinking though!

that was neat. Do you know why bees are rare in New Zealand?

What a great idea your hubby came up with. Win, win all round. I wouldn't have felt happy with them 'on my doorstep' either. Glad you managed to re-home the bees :)

I'm impressed you got that close for a photo. I would have been way too scared of being zapped by the bees.

So cool to see how easily he collected them!

Oh, I'm so happy they found a good home.

Wonderful! Bees when swarming are usually quite docile I think.