It's the silly season


The 'silly season' is that time in the summer when news is slow and reporting resorts to those stories not usually given another thought. It has, indeed, begun.

It started with the last week of 'school'. Years 9 and 10 had yet another week of no learning which is, instead, turned into an 'optional' activities week. Otterboy chose to watch movies all week, while being filled with crap 'snacks' provided by the school. Hrumph.  And, once again, our fine Stratford High School took it upon themselves to decide what would be shown and the kids got to see 'Zombieland'. It is rated 'R' (http://www.imdb.com/title/tt1156398/ ) and the school showed it to 14 and 15 year olds. When we discussed it with other parents at a dinner, the general concensus was, 'they don't care and won't ever change.'

On a lighter note, we had the annual food bank donation drive last week. The city police cars and fire trucks rode up and down every street of the city with their sirens on while volunteers collected bags of food that we left beside our mailboxes. I think that's a very cool thing for the community to do and this year was their biggest collection ever!!

It rained a bit yesterday and today, for the first time in several weeks. It has been so long that the city was already on restriction for watering outside.  I would think the city could look into collecting the rain that fell for days on end last winter.  But it's really not that bad for us since we are not into gardening much at all this year.

Getting lots of Australian TV programs has introduced me to a great Australian comic named Wil Anderson. His stand-up uses a lot of 'f' bombs, but the man is FUNNY!!! Here's his website, http://www.wilanderson.com.au/. 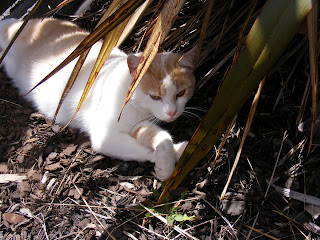 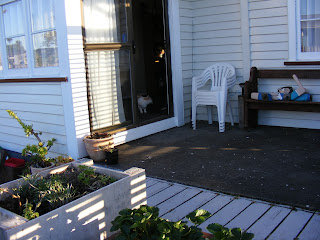 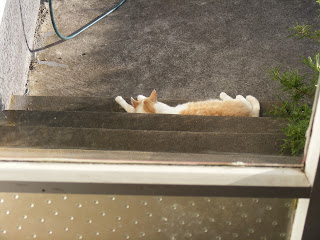 We plan to get another cat after our holiday at the end of January. But until then, I decided to see how much I could lure the neighbor's cat into our lives. (Shame on me for being so vengeful because he said such nasty things about our poor Phred when he died). I believe we have lured Biskit (that's what we call him) as much as he will be lured. He comes into our house and wanders around, tentatively, when he thinks nobody's there. Our computer is in an extra bedroom down the hall and one day, I saw his little face peering around the doorframe but he was out the door before I could catch up! He also climbs up the privacy fence to get to the roof, like Phred did, but when he sees me in the patio door, he climbs straight down and expects some kitty love scratches. I used to think he came to get the milk we put out for him, but he just likes some attention. He won't ever be a house cat, but I'm pleased that he enjoys our company.

There has been a rash of bicycle accidents around the country, mostly in Auckland, the biggest city. The first thing that 'they' (whoever 'they' are) decided was that drivers need to be taught better how to share the roads. I think we would all be better served by teaching people to look before they open their car doors into traffic so the bikes don't have to swerve into traffic to avoid the door. A little courtesy goes a long way.

I"m still trying to get into 'the spirit' of the holidays, although, I've never been one to get into the over-decorating or over-buying. I guess I'm way too pragmatic for that. I might not get all pumped up for just one day of the year, but I do appreciate the Reason for the Season and the fact that God works all year round and not just at Christmas time.

Merry Christmas to you. I find it hard to get into the Christmas spirit too. I spent 15 years in England and still find it difficult to get used to Christmas in Summer.

Krystyn @ Really, Are You Serious? said...

Wow...an R rated movie. I would have been fired.

And, I don't understand why we feel the need to party the last week of school with the little kids. Then they get to high school and expect parties when we end up giving final exams.

I'm shocked that a school showed a 'R' rated film to 14 and 15 years old kids. I would be really upset if that happened to my kids. Grrr.

Cultural differences are aways fascinating. I was surprised at the difference just between the US and the UK when I lived in England for a year and a half. Christmas in summer would definitely be different! Have a wonderful Christmas!
Deb @ RaisingFigureSkaters.com

Merry Christmas to everybody at your house! I share your thoughts on decorating (over-decorating). We're not doing anything this year -- just enjoying everybody else's == kind of the same way we garden in the summer. (We were in Oregon until the 15th and then just arrived in Florida -- too early and then too late to decorate either place.)

Liked reading your post.I love Christmas, the decorating, music, and spirit of it all. My decorations stayed up till the middle of March last Christmas, cause it's all too pretty and festive to take down too soon. Wishing you a lovely holiday. Take care.
Yvonne